The Intellectual Legacy of Eugene Kennedy

The Intellectual Legacy of Eugene Kennedy 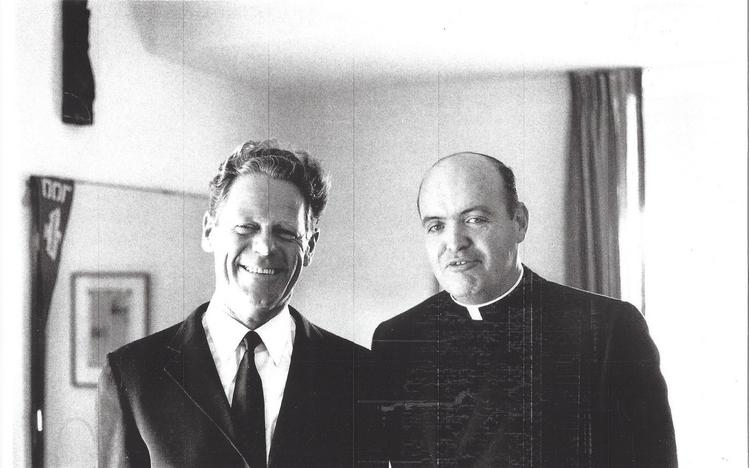 At his death last Wednesday Eugene Kennedy left behind over 50 years of disciplined intellectual writings spanning genres as diverse as original empirical discovery research in clinical psychology, to a wonderfully received play, to hundreds if not thousands of essays and letters to friends. To call him a Renaissance Man is an understatement. Here is just a beginning glance at his contributions to intellectual life in the late 20th and early 21st century.

Dr. Eugene Kennedy was ordained as a priest in the Order of Maryknoll Missionaries 60 years ago this June. Following this he attended Catholic University in Washington D.C. and after some seminary teaching for Maryknoll he was hired by Frank J. Kobler to teach at Loyola University of Chicago, which became his scholarly home.

Early in his career Kennedy achieved scientific recognition for his peer-reviewed work in clinical psychology, studies which by themselves could have confirmed an incredibly successful academic and professional career. Kennedy’s interest in the emotional health of Catholic seminarians began with an academic book published in 1965.

His methodology and findings caught the eye of the apostolic nuncio of the United States (also presumably, the ranking occupant of the fourth floor of the Apostolic Palace in Vatican City) and in 1972 this papal ambassador, with three or four cardinals in tow, birettas in hand, crossed Michigan Avenue to seek out Kennedy and his colleagues at Loyola University of Chicago to conduct a study on the psychological health of the American priesthood.

Other scholars working on this project were Sara Charles, M.D. and Andrew Greeley, Ph.D. Dr. Charles focussed on the psychiatric dimension of the priesthood and Greeley on the sociological dimensions. As a clinical psychologist Kennedy worked with Frank J. Kobler and they pulled together state-of-the art psychological research measures to intensively study a stratified sample of several hundred Catholic priests from across the United States.

The data supported a warning that great numbers of priests were psychologically and psychosexually immature and predicted that many of them would end up leaving their priesthood and would be ineffective in fulfilling their ministries. Kennedy’s fears were downplayed by others but have been proven prescient.

Kobler’s research took an interesting path: he studied over 75 American bishops using an intensive battery of psychological tests as well as face-to-face interviews. A major finding was a sense of optimism among the bishops—data and conclusions presented in a prominent peer-reviewed article of the American Psychological Association and carried in a front-page headline and article in a 1977 front-page article titled “The Happy Bishops.”

Kennedy’s professional colleagues named him both Fellow of the American Psychological Association and President of Division 36 of the American Psychological Association, where he led a resurgence of phenomenologically based research into religion, rather than the postmodern, reductionistic, and data-driven approaches that had overtaken the profession.

Kennedy’s prominence as a psychologist grew further with the publication of three books, On Becoming a Counselor, Sexual Counseling and Crisis Counseling. Michael Leach, former president of Crossroad Publishing as well as Orbis Books, and now editor-at-large for Orbis, recalls:

Of all the books by Gene I had the privilege to publish the one that had the widest impact was On Becoming a Counselor. It was an original work of brilliance, one that spoke to the unmet need of non-professional counselors—clergy, nurses, teachers, guidance counselors, cops, neighbors, relatives, friends—to respond intelligently to troubled people who reach out to them first with their problems. Gene started the project as newsletters and I guess I was the first to ask him to put them together as a book when he had enough of them.

I remember I also wrote the ad for the book with this headline: "When Eugene Kennedy speaks, people listen." That was an easy ripoff of a Wall Street commercial but it was true. We followed it up with Sexual Counseling, a book that also appeared at just the right time. Then Gene told me the next big thing was crisis counseling, so I said let's do it even though I knew nothing about it. Crisis Counseling was ahead of its time. Part of Gene's lasting legacy will be the enormous help he gave tens of thousands of non-professional counselors who in turn helped hundreds of thousands of individuals who came to them first.

In the mid-1970s Gene’s voracious intellect sought other intellectual avenues of study and expression. When he worked for over two years on a biography of Mayor Richard J. Daley of Chicago, Doubleday publishers assigned its top senior editor, Jacqueline Kennedy Onassis (no relation) to work with Gene on both the literary and political aspects of the book. Afterwards their association continued on Gene’s critically successful novel, Father’s Day, set in the Notre Dame Campus of South Bend, Indiana—in many ways a second home to Gene.

In 1977 Gene married his co-researcher Sara Charles, M.D. from the Loyola Priest Study. Their loving 37-year marriage included a complete top to bottom revision of On Becoming a Counselor and in the 21st Century the book has found a further niche in the training of physicians and other medical workers.

After Chicago Archbishop John Cardinal Cody died in the early 1980s, Gene’s friend Joseph Bernardin, archbishop of Cincinnati and president of the United States Catholic Bishop’s Conference, was named to be the prelate to lead the Archdiocese of Chicago.  Gene supported his friend when a false accusation of sex abuse was made (and then recanted) by a former seminarian and was at Bernardin’s side throughout the cardinal’s long and painful death from pancreatic cancer. Some, including myself,  consider Kennedy’s book My Brother Joseph to be his finest.

When Angelo Roncalli was elected Pope in Rome in 1958, Eugene Kennedy was a priest in Washington completing his graduate studies in philosophy. These days, of course, Pope John XXIII is no longer alive, but his historic opening of the Roman Catholic Church continues to reverberate around the world. Indeed, even today one of that Pope's successors, a non-Italian freed from the cobwebs of tradition that so long bound the Pontiff to Rome, is touring the American Sun Belt like a worldly politician gathering the faithful, convincing the doubtful and arousing the emotions of those who disagree.

And in a way Mr. Kennedy is a vital part of that same turmoil and change that has revolutionized the once-monolithic Catholic Church. For Mr. Kennedy is no longer a priest. He is, in fact, married. And he is, among many other things, an outspoken writer whose latest work, ''I Would Be Called John: Pope John XXIII,'' will be broadcast this week on PBS (Channel 13 will air the show on Thursday night at 9).

Well, was it a good play? No spoilers will be given here, and an adroit searcher can find the entire video clip of the play with the help of a good search engine.  As interesting as the Pope in the play is Gene’s summary of why he sought out the career he and chose the subject he did for the one and only play he ever wrote: ''I grew up in an age,'' Kennedy said, ''when you were expected to give up what you liked to take on your duty. I enjoyed the priesthood. And I found the time of Pope John a tremendously exciting experience, the sense of renewal and reawakening. He captured the world's imagination.''

Few realize that the universe beyond our planet also captured Gene’s imagination. The Easter New York Times Sunday Magazine cover (April 15, 1979) story featured a still-shot of Earth, taken by one of the Apollo astronauts using (a still unmatched) Hasselblad camera system, and the cover story title with Gene’s byline.

The gist of this article was the great challenge of space exploration and new technologies (was he thinking of artificial intelligence and its philosophical and theological confrontation to the Catholic faith?). In this searching essay Gene joins C.S. Lewis, Stephen Hawking, Alan Turing, and astute Jesuits from the Vatican  Observatory in wrangling with the theological implications—both fears and hopes—that will emerge in the unpredictable future.

When seeking an objective opinion of someone--not influenced by fondness or friendship—it can be helpful to seek out that person’s academic colleagues. Long years of working together and the atmosphere of academia often allow colleagues to grasp fully a person’s intellectual and personal strengths and weaknesses.

Dr. Gerard Egan, colleague of Kennedy for decades at Loyola University of Chicago is author of The Skilled Helper, the highest selling counseling graduate textbook in the world, and a consultant to top companies in management and leadership.

“All I can say is that I have always found Gene's ideas fresh, new, and intelligent, even when, on rare occasions, I might disagree with him. He brought freshness and common sense to the profession,” said Egan.

“Being with him has always been an event.”

William Van Ornum is professor of psychology at Marist College and director of research and development/grants at American Mental Health Foundation in New York City. He was a student and then colleague of Eugene Kennedy and with John B. Mordock published Crisis Counseling with Children and Adolescents, a sequel to Kennedy's counseling trilogy.

Show Comments (
1
)
Comments are automatically closed two weeks after an article's initial publication. See our comments policy for more.
David Pasinski
4 years 7 months ago
Entering the seminary in 1965, we devoured many of Kennedy's books. Later on, his texts counseling were most formative and helpful. I followed his example in being an associate priest with Maryknoll and later marrying but still staying involved in many dimensions of Church life. He is appreciated and - like McBrien and Greeley- questions abound about who can ever approach their contributions and roles in this era...
Advertisement