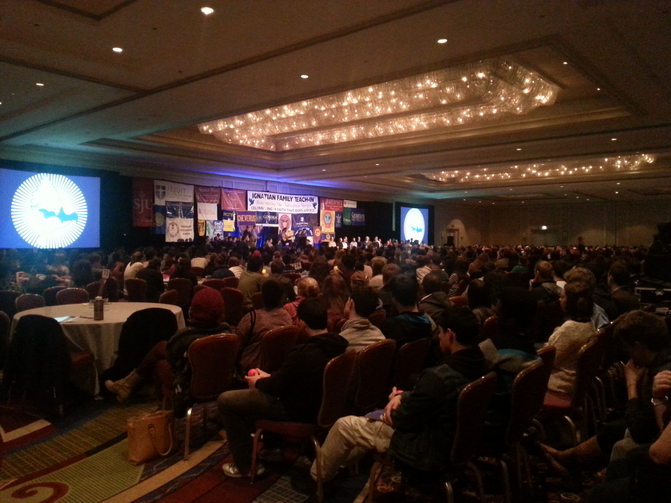 I have never met Segundo Montes. I have also never met Ignacio Ellacuria or Amando Lopez. I have not met Ignacio Martin-Baro, Juan Ramon Moreno, Joaquin Lopez y Lopez, nor Elba Ramos or her daughter Celina. The truth is that they all died five years before I was even born. These eight individuals living at the Universidad Centroamericana in El Salvador were executed by El Salvadorian commandos* who were trained by the School of the Americas in Fort Benning, Georgia. They were killed, along with many predecessors, because they were speaking out, teaching, working with and listening to the victims of the civil war. And they were silenced in death.

The year following the assassinations (1990), the School of the Americas Watch (SOAWatch) was formed and hundreds of individuals kept vigil outside of Ft. Benning as a sign of protest. It became an annual pilgrimage for thousands who felt that justice was being neglected. In 1996, the Ignatian Family Teach-In was formed, helping to coordinate activists and protesters from Jesuit institutions across the United States in continued protest at Ft. Benning. Since 2010, the Ignatian Family Teach-In has taken place in Washington D.C. with an added component of lobbying congressional and senatorial representatives on various issues that continue to affect our country and its people in unjust ways.

This years’ Teach-In took place from November 16-18, with over 1,300 students, faculty and staff from over 20 Jesuit institutions. This being my first Teach-In, the energy and excitement was palpable. With such a wide variety of ages, opinions and experiences, all brought forth by individuals taught in the Ignatian tradition, dialogue and community abounded. While there were certainly many forces at play, there was one that trumped all others: solidaridad—solidarity.

Solidarity is not about charity. Although giving is certainly a part of it, solidarity calls for much more. It calls for us to act as witnesses to injustices and to call the aggressors out, front and center, and to fight for what is right on behalf of and with those who have no voice. Almost all of the students there, just like me, were not even born when those six Jesuits and two women were brutally murdered in El Salvador, but that does not mean we as a people of faith can simply ignore and forget about it. We are not fighting for lost friends, but for people everywhere. We are called to forgive injustices, but not to let them stand. That’s why over 1,300 people descended on D.C.: to remember the dead, to fight for the living, and to learn and act as witnesses for what’s still wrong in this world.

“The primary goal of the IFTJ is to create a space for members of the Ignatian family to gather to learn, pray, network and act for social justice” stated Christopher Kerr, executive director of the Ignatian Solidarity Network (http://ignatiansolidarity.net/) and the man in-charge of the Teach-In. “This is really about Solidarity with our students around the nation as well, but it also a sign of Solidarity throughout the world, and of course with those most in need.”

This years’ Teach-In fulfilled those goals. Watching students laugh as Fr. James Martin, S.J., showed them the necessity of humor and joy in the spiritual life; witnessing the shock and awe in response to Sr. Peggy O’Neill, S.C. as she challenged everyone to “Get a life and do something truly meaningful;” hearing student speakers rock-the-house on issues of death, undocumented individuals, gay rights and a myriad of other topics; seeing the tears during the Saturday evening prayer vigil as Jesuits and their colleagues from across the nation walked up the aisle of the darkened room, each holding a candle representing one of the 52 Jesuits killed for their work since 1972, showing that only light dispels darkness—these were all indicators of that success.

Students and faculty confirmed that the weekend was a success. One St. Peter’s Prep student said, “As a Hispanic, I’ve felt those topics at home and wish I could’ve done something about it. If one person is changed, this is worth it,” with his classmate adding “This has opened my eyes to injustice and that so many people want to change, it really gives me hope.” Another student, who has never attended a Jesuit school but attends St. Mary’s Student Church at the University of Michigan, stated “I love it here. As an introduction to Jesuit thought and Ignatian spirituality, this is a truly profound and opening experience.” Michael Hayes, director of campus ministry at Canisius College, Buffalo, N.Y., quoted Sr. Peggy O’Neill, stating, “She said yesterday ‘If your dreams don’t scare you, then they aren’t big enough,’ which makes me think: Where do I lead my students to be scared?”

But the clearest sign of success was Monday morning on Capitol Hill. Over 800 students and faculty gathered on the lawn of the Capitol building in prayer and to hear testimony of those who had been affected by the three main lobbying issues of this Teach-In: immigration reform, a fare and sustainable minimum wage, and protesting cuts to SNAP. “We are lobbying,” explained Mr. Kerr, “for the needs of those most marginalized and we are engaging on behalf of those deemed the least.” The students met with Senators, Congressional representatives and their staffs; they flooded the House and Senate buildings speaking up and out regarding these serious issues: keeping immigrant families together, paying workers a basic wage on which to live, making sure Americans are fed under one of the most efficient and sustainable welfare programs.

This is Solidarity. Forming communities, praying together, fighting together, not letting a commitment to justice and service die—this is the work of the Ignatian Solidarity Network. And this is why the Teach-In gives me hope, because that means those eight individuals did not die in vain 24 years ago and that their work will go on.

Nicholas D. Sawicki is an intern at America.

* Thanks to Gene Palumbo for clarifying the cirumstances of the killings at UCA. More details available here.