Six things to expect when Pope Francis goes to Washington 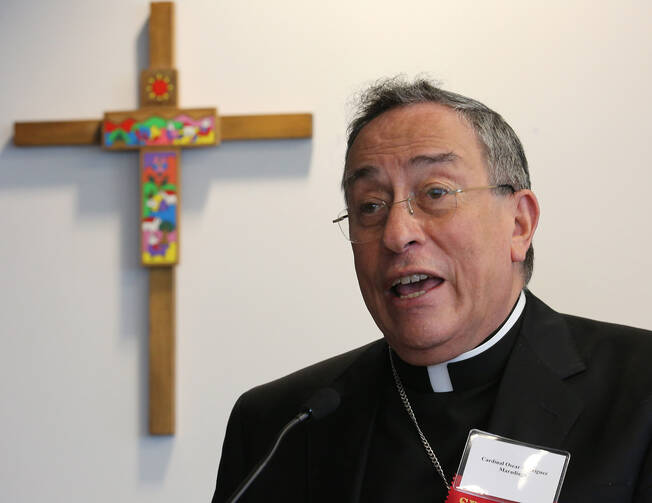 Everyone wants Congress to stop fighting and get working, and that includes Pope Francis, a top adviser said on April 29 in a preview of the pope’s upcoming U.S. trip.

The Argentine-born pontiff has never been to the U.S., but he will make history in September as the first pope to address a joint meeting of the House and Senate on Capitol Hill.

“The pope will come humbly but will talk clearly,” Honduran Cardinal Oscar Rodriguez Maradiaga, a top adviser to Francis, told an audience at Georgetown University.

The 72-year-old cardinal, who leads Francis’ nine-member advisory council of cardinals, is spending several days in Washington and offered a look inside the pope’s thinking as the nation’s capital readies the papal welcome mat.

The papal address to the Republican-controlled Congress is likely to be one of the most closely watched talks during the pope’s weeklong visit to Washington, New York and Philadelphia this fall, especially since the presidential campaign season will be growing more intense.

Francis isn’t shy about tackling controversial topics or upending conventional orthodoxies about Catholics and politics — a prospect that makes U.S. conservatives especially nervous, given Francis’ insistence on raising concerns about issues such as economic justice, climate change and immigration.

And Francis isn’t likely to change his tune, Maradiaga said as he previewed some of the pope’s likely themes. Among the points that Maradiaga expects Francis to make in September:

Welcome immigrants:
Maradiaga reiterated that Francis would have liked to enter the U.S. by crossing the border with Mexico to make a point about welcoming immigrants, not building walls to keep them out. He said that while time did not allow for a border stopover, the pontiff was certain to raise the issue on Capitol Hill.

“Even here, the desert cannot be a tomb or a cemetery,” he said, referring to the migrants who often die trying to cross into Arizona or Texas.

Battle economic inequality:
“Capitalism is not a god. It is not a divinity. It is not a system that is perfect and does not need any modification,” he said during a luncheon meeting. “This system is fostering tremendous inequalities.”

A just economy means strong families:
Maradiaga indicated that promoting an economy that helps the struggling middle class and the poor in particular will also be key to the pope’s message of support for the family:

“The (free) market economy is not complete. We need a social market economy. This is the big contribution of the Catholic faith to the system — to try to have this social component that will bring more justice to the system,” he said. “It is not fair that a system that is producing so much richness could walk side by side with so much poverty.”

Protect the environment:
Francis is going to publish a major teaching document on the environment ahead of his U.S. visit, and observers expect the encyclical to accept the reality of climate change and mankind’s role in it, and to call for action to address the dangers:

“Do not expect statistics or numbers or theories” in the encyclical, Maradiaga said. “He will go directly to the responsibility of all the baptized, especially with creation. Because all of us have responsibility.

“I am clear. We cannot continue playing with creation and contaminating” the Earth, Maradiaga said. The pope seems to agree with him and will raise the issue in September — much to the consternation of many conservatives who have been trying to blunt the document’s impact even before it is published.

Fight partisanship:
“For many Catholics, first is the political party, then is the church,” Maradiaga said.

“I see this in some attitudes of citizens who are first Republicans or Democrats. Then comes Catholicism. This is a big problem. Because we have to put everything in order. God is first, then all other human institutions.”

“Even the congresspeople can listen to other voices, to counsels, to advisers. It’s a human attitude that we have to develop. The one who receives advice commits less errors and is not mistaken. The one who does not like to listen to advice will have a lot of trouble. So I think the Congress will receive very well the advice (of the pope) — even if there are some things that will not be comfortable.”

Indeed, Maradiaga said both he and the pope are aware of the opposition he faces from many activists and pundits in the U.S., even as polls show that he is enormously popular with Catholics and the wider public, and across the political spectrum.

At a noon Mass in the university chapel, Maradiaga added an impromptu supplication to the prayers during the liturgy:

“Let us pray for the visit of our Pope Francis to the United States,” he intoned. “It won’t be easy, but it will be a great blessing.”

David Gibson - Religion News Service
Show Comments (
2
)
Comments are automatically closed two weeks after an article's initial publication. See our comments policy for more.
Chuck Kotlarz
7 years 9 months ago
President Lyndon Johnson backed the Great Society Higher Education Act in 1965 to help to lessen the economic divide between poor and rich American families. Today, states closely aligned with the principles of the Great Society have a college graduation rate 40% higher than states closely aligned with other agenda. Divorce rates also run 25% lower in states closely aligned with principles of the Great Society. President Franklin Roosevelt in 1935 launched Social Security and unemployment insurance which Federal Reserve chairman Marriner Eccles (1935-1948) felt were essential to preventing economic depressions. In the eight worst US economic contractions since 1856, unemployment typically ranged from 12 to 25%. After Franklin Roosevelt’s last term, unemployment never once reached 12%.
Nicholas Clifford
7 years 6 months ago
Mr. Kotlarz: Where do the figures in the first paragraph come from? I'm not questioning them at all -- they make perfect sense to me. But, no doubt because of academic persnickety-ness, I'm interested in sources. Thanks.