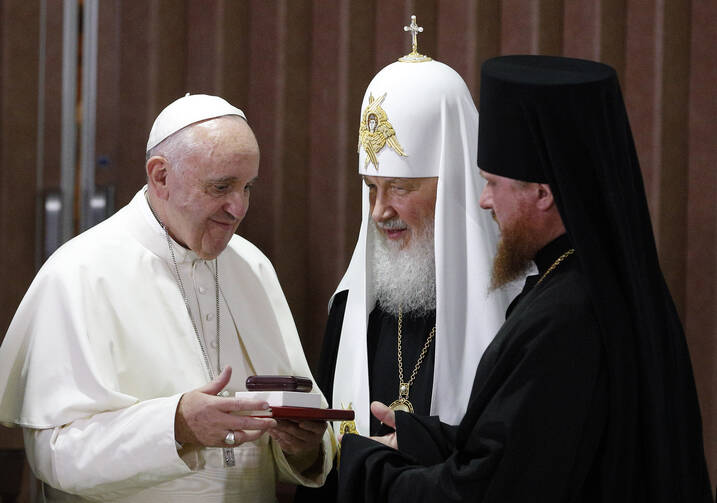 Pope Francis was full of joy and enthusiasm after his meeting with Patriarch Kirill. His face revealed this clearly as he spoke on the plane to journalists shortly after departing from Havana and heading for Mexico City. His face was glowing with happiness, as he confided, “I felt an internal joy.”

“We spoke together as brothers, we spoke freely and with frankness about the things that concern us. We didn’t mince words,” he stated.

“We spoke as pastors, about our concerns for our churches and for the world where wars are being fought piecemeal but risk turning into a world war,” he said.

He revealed that during their private conversation, at one point he told Kirill that “if we wait” to work out Christian unity in the study, the Lord would arrive before it happened. “We make unity by walking together,” he stated.

He said they had talked together in the presence of the interpreters and of Metropolitan Kirill, the head of the Department of External Affairs of the Patriarchate of Moscow, and of Cardinal Koch, President of the Pontifical Council for Christian Unity. They also spoke about the Pan-Orthodox meeting that will take place in Crete in June, he said.

He and Kirill had discussed “how we can work together,” he said, and in this context he commented on the joint declaration they had just signed. That 30 point declaration covers many issues, some of which could give rise to questions and discussion. Well aware of this, and seeking to avoid sterile debate, Francis offered an interpretative key to its reading. “It is not a political or sociological document, it is a pastoral document written by two bishops in which they express concern for their churches and for the world’”

It is clear that for Francis the most important thing was his meeting with Kirill, not the document, though the latter too has its importance as it identifies ways in which Catholics and Orthodox can work together on the road to unity.

The declaration covers a wide range of subjects, ranging from the unity they shared in the Christian millennium, to “the wounds” of division “caused by old and recent conflicts.” Significantly it adds that “mindful of the permanence of many obstacles” to recovering that unity, Francis and Kirill express “the hope that our meeting may contribute to the re-establishment of this unity.” On this road, they committed themselves “to combine our efforts” to give witness to the Gospel of Christ in the modern world.

In several paragraphs, the joint declaration expresses their deep concern at the suffering and persecution of Christians in the Middle East and in North Africa. Here, Francis and Kirill call on the international community “to act urgently in order to prevent the further expulsion of Christians from the Middle East,” to bring an end to the violence and terrorism and, through dialogue, to bring peace to Iraq and Syria. In this context, they denounce the use of religion “to justify criminal acts” and affirm that God “is not the God of disorder, but of peace.”

In the declaration, Francis and Kirill says “interreligious dialogue is indispensable in our disturbing times,” and they emphasize the need for religious leaders to “educate” their faithful to respect the convictions of those belonging to other religious traditions. Here too, they affirm the importance of religious freedom and thank God for the renewal of Christian faith in Russia and other countries of Eastern Europe that were once subject to atheist regimes. They express concern at the lack of religious freedom in some parts of the world, and note “the transformation of some countries into secularized societies.” Here, they invite vigilance against a European integration “that is devoid of respect for religious freedom.”

The two leaders, in the declaration, also speak about about the great poverty in the world and the plight of migrants in many countries, and emphasize the need for the Christian Churches “to defend the demands of justice, the respect for people’s traditions, and an authentic solidarity towards all who suffer.”

Their joint declaration affirms the family, and marriage between a man and a woman, and underlines the need to respect “the inalienable right to life.”

The four-page text reminds Orthodox and Catholics of what they share in common and tells them “we are not competitors but brothers,” and says that this concept should guide their actions. They express the hope that their meeting may contribute “to reconciliation wherever tensions exist between Greek Catholics and Orthodox,” and they acknowledge that while “unitatism” is not the method to reach unity, these communities have a right to exist.

The two leaders in their declaration “deplore” the hostility in the Ukraine, invite the international community to work for peace there, and urge all churches in this country to work for “social harmony.” They also express the hope for the overcoming of the schism between the Orthodox faithful in the Ukraine, and urge the Catholic communities in the country to contribute to this.

Near the end of this long declaration, Francis and Kirill call on Orthodox and Catholics “to work together” in proclaiming the Good News to the world, and to give a compelling Christian witness ‘in all spheres of personal and social life.”

An analysis of the declaration leads to the clear conclusion that while this is not a theological document, it is a document that confirms the theologically based relationship between the two sister churches.

It deals with many of the questions that have already been addressed in the discussions and conversations between the Catholic and Russian Orthodox Churches in recent times.

A rapid analysis of this declaration suggests that in actual fact there is nothing really new in this statement in terms of content. Its real significance is to be found in the fact that it is the first time ever that the Catholic and Russian Orthodox Churches are saying these things together in the same place, in a common witness on these important issues,

At the same time, it is clear that this joint declaration does not mean, nor does it suggest in any way, that all the questions or all the reasons for tensions between the two churches have been resolved; rather, it signifies that there is now the beginning of a new solidarity in facing them.

It is important, in particular, to underline that this joint declaration should be understood as a compromise between the positions of the two churches on several issues, and therefore it can be judged from both sides as somewhat inadequate. This is indeed a compromise document coming from different world visions, from different theological understandings of the modern world. Significantly, each side has given and taken a little to reach this agreed joint declaration.

Many times since becoming pope, Francis has emphasized the importance of encounter, of talking together and then doing things together. He believes this is the high road to reach other goals, such as the resolution of theological issues. He believes that by talking, sharing and working together and building trust over time, it will be easier to untie the knots of the difficult theological questions.