How Should the CDF Treat U.S. Nuns? 'Just Say "Thank You"' 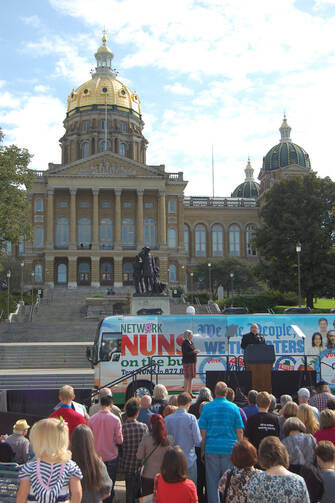 About 18 months ago a Vatican official told me he had asked a U.S.  philanthropist for advice on how to deal with controversy with American nuns. The philanthropist advised: "Just say 'thank you.'"

The conversation came to mind as I read comments Sept. 18 in The New York Times by Vice President Biden in which he said he advised Pope Francis to lighten up and not be be so hard on the nuns.

The latest controversy between the Vatican Congregation for the Doctrine of the Faith (CDF) and the Leadership Conference of Women Religious (LCWR) may be the most ill-fated controversy ever launched across the Tiber. For sure, the Vatican is in an awkward position.

In political history, one of the worst statements ever uttered was Richard Nixon's infamous "I am not a crook." Cardinal Gerhard Mueller has now offered the church's equivalent when he said of Vatican officials, "We are not misogynists." The man who heads the venerable CDF topped that off with another turkey line when he added: "We don't want to gobble up a woman a day!"

Cardinal Mueller stated that the LCWR does not "represent all U.S. nuns, but just a group of North American nuns who form part of an association.” In other words, the CDF isn't talking to the approximately 45,000 American nuns whose leaders belong to LCWR,  but just the organization's members. But those members are not some crowd at a hot dog roast—they are the canonically elected leaders of their religious orders.

The Vatican stands on the losing side of this fiasco given that virtually every Catholic has been the beneficiary of some sister's generosity or knows someone else who has, perhaps in a school, hospital, parish, soup kitchen, used clothes center or inner city clinic.

The nuns' works continue even as the Vatican criticizes the sisters, who object that they have to spend time on this contretemps when there are other needs to meet. Right now, for example, the sisters have agreed to take on heroic work as part of Solidarity With South Sudan, an enterprise begun in 2008 to rebuild that war-torn nation. This effort of men and women religious worldwide is supported by the LCWR in the United States. So far, they have built two training colleges and trained 2,500 teachers, rehabilitated a health training institute that has graduated 65 registered nurses and 35 midwives,  and initiated training of farmers and pastoral teams to aid the suffering people there.

A couple weeks ago, Mercy Sister Karen Schneider, M.D., an emergency department physician from Johns Hopkins Hospital in Baltimore, returned from rural Nigeria, where, despite the Ebola threat, she and other sisters provided surgery and other health services to children. They offered what is routine care in our affluent country but generally out of reach in rural Nigeria and other third world nations.

The LCWR has been criticized by some, including, the National Catholic Reporter, for playing their cards close to the vest and not engaging in public battle with the CDF. A wounding verbal scrimmage of ecclesial boys and girls would be any newspaper's dream but would cause harm to church unity, something the nuns are loath to do.

Cardinal Mueller reportedly will be on the east coast in November. It would be well for him to meet some of the sisters involved in these and other works. It also may be time for the Vatican to draw this controversy to an end. It's time to follow the philanthropist's advice and just say "Thank you."

Our apologies, but since some commenters are not using a real name, we are temporarily closing comments on this discussion.