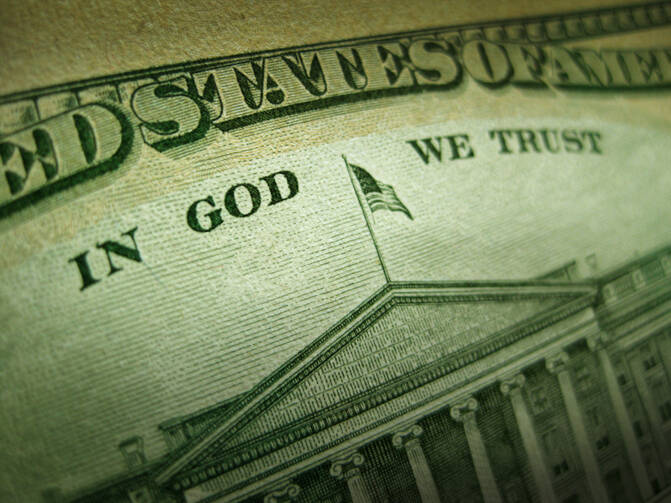 Pope Francis takes the title of his encyclical “Laudato Si’” from a hymn of praise written by Francis of Assisi. He speaks in rhapsodic terms of the God of creation and ends with a mystical prayer. This is the gentle, simple beauty of the document. Yet there is another side to the encyclical. It was written not only to praise the true God, but to scoff at false ones. It not only writes a loving icon, it smashes idols.

Pope Francis believes that we have made gods of progress and the market. This is why his denunciations of them are so vigorous. Even if (as experts will continue to explain in the weeks ahead) his specific criticisms are in the main either trivially true, meaningless, or false, we can still see their purpose. They exist to scandalize those who have taken the creations of man and called them gods. The purpose of blasphemy is to dispute divinity, and Francis’ denunciations of the market and progress fill precisely this function.

It is important that we recognize this element of the encyclical, or we risk missing its meaning. Writing here at America, Nathan Schneider wonders if the column I wrote on “Laudato Si’” for the Washington Post is “an expression of loyalty that meanwhile does the work of opposition,” one in which “seizing on the document’s darker passages” becomes a way of criticizing it. I inserted very little of my own opinion into the column, so I understand Schnedier’s puzzlement. My aim in stressing these elements was to make sure that those who worship the false gods Francis attacks do not miss his meaning. He is the Charlie Hebdo of technocratic idols, and nothing is furthered if we paint him as another kindly churchman. While I do have questions and reservations about some elements of “Laudato Si’,” for its attack on false idols I have nothing but praise.

Of course, many people will deny that we have made an idol of either progress or the market, but many of those same people have reacted to “Laudato Si’” in a way that very nearly proves Francis’ point. If this were merely a dispute over empirical questions, calmness could prevail. But many of those most rankled by Francis’ criticism of the market are acting as though he had just called their mother a dirty name—or taken their lord's name in vain. Many do not react so viscerally but still would refuse to offer such criticism themselves. They respect their neighbors’ god even if he is not their own; they are willing to admit to the pantheon deities they do not worship. Francis will have none of this, and neither should we.

Imagine a town of people who live beside a river and, depending on it both as a trade route and a source of silt deposits, worship it as a deity. When weather reports show that the river will flood the town unless drastic action is taken, some say that nothing should be done. The will of the river god cannot be gainsaid, they claim. After all, he will flood them one day anyway. The fact that the flooding will be exacerbated by the decision of the town’s rulers to build up levees along the river’s bank and by their failure to reinforce old dams is waved away by these devotees as a mere irrelevance. Human responsibility is denied; the supposed power of the deified river is magnified. This is how Francis sees the onslaught of the progress and the market. They are threats to our very existence that can be prevented only if we stop worshipping them. They can also be means by which we enjoy life but, again, only if we stop worshipping them.

To heed Francis’ call does not mean—as he readily recognizes—that we seek to undo all progress or reject markets wholesale. Instead, it means realizing that what we call “progress” and “the market” are the results of human agency susceptible to criticism and adjustment like any other set of human actions. It means not initiating a taboo response any time they are criticized. Instead, we must put our trust only in the God of creation. This trust provides part of the answer to Schneider’s question about how I can see Francis as a pessimist. I do think he is a pessimist, but I also think he is possessed of a great hope in Christ. This is this hope that buoys ”Laudato Si’” and that moved Schneider to tears and me to wordless wonder.

Matthew Schmitz
Show Comments (
8
)
Comments are automatically closed two weeks after an article's initial publication. See our comments policy for more.
Richard Murray
7 years 7 months ago
Mr. Schmitz, as you say at the end of this piece, you should have stayed quiet. There are three initial problems with this piece and the article you tacked on the board at the Washington Post. First, in the Washington Post opinion piece, you absolutely attack Pope Francis and the new encyclical Laudato Si’. Then in this piece here in America, you curtsy and pretend that you admire the Pope and his letter. Why this double-faced move, Matthew? Second, in this America piece, you liken Pope Francis to Charlie Hebdo. Stop right there. Do you realize what a gross insult this is? Third, your take on the encyclical in the Washington Post is ridiculous and off balance. In a later note I look forward to addressing your opinion-piece in a more comprehensive way. Best regards.
Joshua DeCuir
7 years 7 months ago
Mr. Murray, instead of hurling insults, perhaps it'd be more fruitful if you had spent the space laying out the specific criticisms you have of Schmitz that you say you have. Otherwise, this is a string of ad hominem that does nothing to elucidate in particular your disagreements.
Richard Murray
7 years 7 months ago
Pope Francis is a scientist, a theologian, a great shepherd, and a brilliant thinker. And a mystic, and wise. For proof of his ability to see deeply to the bottom of complex social systems, read his essay entitled “Corruption and Sin” in the volume “The Way of Humility”, published by Ignatius Press. In this clear and deep essay, Pope Francis analyzes how evil affects the operation of the social order. It’s amazingly insightful. And although the topic is difficult, the Pontiff is brimming with truth, hope, and strength. Then, in “The Joy of the Gospel,” the leader of the Catholic Church is on fire with the joy of the Word, and gives us some mystic clues towards the end of the encyclical. Then, in “Laudato Si’,” our Pope again, necessarily, tackles a difficult issue—the degradation of the environment. But he brilliantly makes this an opportunity to teach humanity the way to a bright future, one in which we are in a much deeper relationship with the Earth and Creation. More Good News. And at the press conference last week accompanying the release of the encyclical, Cardinal Turkson, together with Metropolitan of Pergamon John Zizioulas—an Orthodox bishop!—were at center stage. Together. A hugely positive ecumenical sign of hope, love, and progress. Enter Mr. Schmitz’ op-ed piece in the Washington Post, the title of which screams, falsely, that the Pope wants to “roll back progress”. In the first sentence he falsely calls the Pope “a profoundly pessimistic man.” It goes downhill from there. Who does Mr. Schmitz think he is to so casually cast false insults at the leader of the Catholic Church? In a national newspaper?! Oh, in the above piece in America, he ludicrously calls the Pope “Charlie Hebdo.” Mr. DeCuir, who's being ad hominem here?
Joshua DeCuir
7 years 7 months ago
Assuming for the sake of argument you are accurately describing Mr. Schmitz's intention, he certainly is by no means the first person to "Cast false insults" at the Pope in a national newspaper. Secondly, I am not sure Mr. Schmitz is intending his comments to be read as you insist, but from your comments, I'm skeptical he'll get any benefit of the doubt from you.
Richard Murray
7 years 7 months ago
1) That Mr. Schmitz is not the first to "casually cast false insults" at a Pope does not excuse him from his serious errors, obviously. 2) What he wrote, he wrote. Is his "intent", as you infer, different from what he wrote? Then why didn't he say so? I would give him the benefit of the doubt if that were a possibility. But his words, especially in the Washington Post hack-job, didn't leave any room for that. Mr. DeCuir, if you can put a positive spin on the Washington Post piece, I'm all ears.
Joshua DeCuir
7 years 7 months ago
Just out of curiosity, have you read anything else Mr. Schmitz has written about Pope Francis?
Richard Murray
7 years 7 months ago
Yep.
Joshua DeCuir
7 years 7 months ago
Kudos to America for allowing Mr. Schmitz to elaborate & respond. It allows for engagement beyond talking over each other at our respective media outlets of choice. I see Mr. Schmitz hearing tones from the same score as Mr. Schneider. But to acknowledge those notes is not to negate the score, but to fundamentally affirm it.