The persistence of pro-life feminism 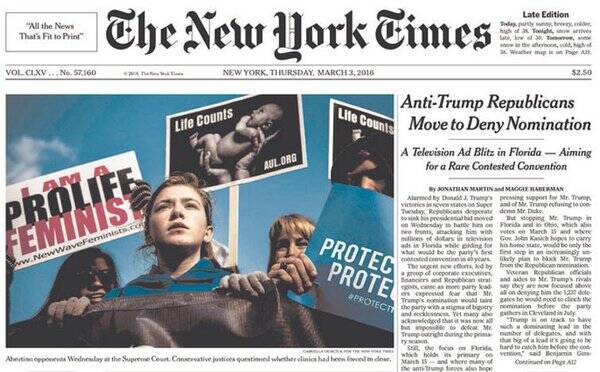 The picture on the front page of The New York Times from March 3 shows a young woman holding a sign protesting abortion that says “I am a Prolife Feminist.” In the background other signs appear: “Life Counts” and “Protect, Protect.” As a pro-life feminist of many decades I was more than encouraged.

What a contrast with the life stories of two older feminist icons that my alumni book group had just read. Ruth Bader Ginsburg and Gloria Steinem, both over 80, are justly admired for their committed efforts to obtain equality for women in marriage, education and employment. Both also pursued justice for other vulnerable groups—but not for the unborn. Their lives are “disappeared” in these narratives. Those who hold pro-life views are depicted as enemies of women, dupes of authoritarian male efforts to deny women’s rights to equality or else as backward religious bigots.

For many second-wave feminists of the 1960s, feminism by definition assumed that women should have the private freedom to choose life or death over their offspring. But this interpretation of feminism, despite Roe v. Wade’s victory, is contested by other dedicated feminists. Pro-life feminists see such lethal assertions as regression to patriarchal claims of domination; fathers once wielded life or death choices over newborns, children, women and slaves. Roman males legally made such private choices for the advancement of self, family status or wealth. Infanticide was as accepted as military conquest, slavery or gladiatorial games.

By contrast, pro-life feminists assert the alternative inclusive justice of Western morality: Equal protection and nonviolent support is owed to each and every human life. Protect, protect. The first American feminists, such as Elizabeth Cady Stanton and Susan B. Anthony, held such pro-life views as they struggled for women’s suffrage, social equality, child welfare and abolition. These heroic women and pro-life feminist foremothers are often ignored, or strategically forgotten, by abortion activists. It is also unremembered that pro-life advocates before Roe v. Wade were progressive activists fighting for civil rights and racial justice as well as for women and children. (See the new book by Daniel K. Williams, Defenders of the Unborn: The Pro-Life Movement Before Roe v. Wade.) These broad-based, inclusive pro-life movements have continued to grow and add their influence to forces with other long-term pro-life organizations.

Since 1973 activists groups have adopted and developed Cardinal Joseph Bernadin’s argument for a “seamless garment” approach to life issue. This includes capital punishment, unjust war, abortion, euthanasia and poverty as abuses against justice. Currently, the group Consistent Life has coordinated and taken up these interrelated causes. Consistent Lifers work for nonviolent nonlethal alternatives to abortion, euthanasia, capital punishment and war. Pro-life feminists continue their pro-woman, pro-life work in groups such as Feminists for Life and Feminists for NonViolent Choices. They join in the struggle against abortion and abuses of women. Even more recently a new “whole life democrat” group, Democrats for Life of America, has formed to retrieve their party’s championing of the most vulnerable and powerless including women, children and the unborn. Inevitably all of these movements renew conflicts over abortion and are reflected in legal and political struggles. The question then arises, why are these shifts in the cultural winds taking place now?

Sidney Callahan
Show Comments (
11
)
Comments are automatically closed two weeks after an article's initial publication. See our comments policy for more.
Crystal Watson
6 years 11 months ago
I do think the idea of pro-life feminists is a kind of oxymoron. Feminism is about opportunity and choice for women, but the pro-life movement wants to take those away in the area of abortion and even sometimes contraception. The Feminists for Life want to do away with legal abortion even in the cases of incest, rape, and when a woman's health is in danger .... that doesn't sound very 'feminist. An article about the appropriation of Susan B Anthony by the Feminists for Life ... http://www.nytimes.com/2006/10/13/opinion/13schiff.html?_r=2&adxnnl=1&oref=slogin&adxnnlx=1225570563-IwrKSp+SVxAph01d41sRbg&
Crystal Watson
6 years 11 months ago
Forgot to mention ... I don't think it's that feminism is changing (the different waves). Feminism is till feminism, as can be seen by the many young women who support Bernie Sanders for president, a strong pro-choice candidate. Pro-choice feminism is alive and well - for an example, check out Ultraviolet ... https://twitter.com/UltraViolet
Joan Hill
6 years 10 months ago
There are those of us who support Sanders in spite of, not because of, his stand on abortion.
Crystal Watson
6 years 10 months ago
So you believe abortion is murder but you are willing to support a president who will do all he can to protect the right to choose?
Bill Collier
6 years 11 months ago
Thank you to Sidney Callahan for this timely comment. While advocating for a pro-life, consistent ethic of life message is not dependent on one's gender, the message resonates much more, in my opinion, when it is imparted by feminists such as Ms. Callahan and the women she applauds in the NYT article. They understand fully that there is no dissonance between being a feminist and protecting all human life no matter its state of development and temporary dependency.
Acyuta Ananda
6 years 11 months ago
Thanks, in particular for the observation about how previously it was male patriarchs who wielded life or death choices over our very small sisters and brothers, which I hadn't thought of before. Besides the obvious political challenges, I and a co-author have seen two more challenges that pro-life feminism has to meet. I'd like to invite everyone to read "Next Steps for the Pro-Life Feminist Movement." http://blog.secularprolife.org/2016/02/next-steps-for-pro-life-feminist.html Please see if you agree about those next steps.
Aimee Murphy
6 years 11 months ago
I do believe we've seen a collective movement of pro-life feminist/Consistent Life Ethic organizations really working together in the last 4-5 years that has helped bring more visibility to the message. Projects like Pro-Life Allies and the "Empowering Women Through Life" rally at the Life Matters Meetup this year have helped to "light a fire" and enkindle our passion for a holistic view of human rights. I'd be neglectful if I didn't mention that you should also look up Life Matters Journal and New Wave Feminists -- the groups that were responsible for those "I am a pro-life feminist" signs getting to the rally at the Supreme Court that day. :) Thanks for sharing more about this awesome pro-woman, pro-life movement!
William Rydberg
6 years 11 months ago
Some would say that it's disingenuous to claim that from a legal point of view Roe versus Wade was a kind of "feminist act" because the reason why they refused a determination whether the Child in the womb was a "person" under the law was due to the "Right to Privacy". Just my opinion, in Christ,
Luis Gutierrez
6 years 10 months ago
The "seamless garment" approach should include the ordination of women to the priesthood and the episcopate. Why should the Church continue to be a patriarchal family? The sacredness of life from conception to natural death should include allowing all authentic vocations to be mediated by the Church. Canon 1024 is an artificial contraceptive (if not an abortifacient!) of female vocations to the ministerial priesthood. The credibility of the Catholic ethos in matters of human sexuality will be compromised as long as this issue is unresolved.
ckr link
6 years 1 month ago
Great job! Thx! Szybkokupię mieszkanie w Warszawie za gotówkę
ckr link
6 years 1 month ago
This art is ok. Co grozi za posiadanie marihuany przez nieletniego?