The Spirit at work, from Vatican II to the Synod on the Family 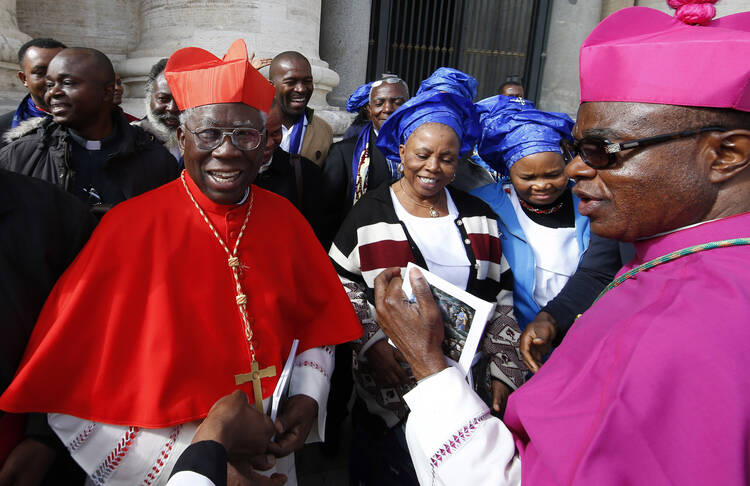 The Christian family is proclaimed in Catholic teaching as “the domestic church.” How fitting then that after the recent synod Catholic families can be more closely modelled on Vatican II’s more open vision of the church. Families too can be inspired to be more accepting, inclusive, just and personally responsive to individual conscience.

Yet it is no secret that opposition to changing any teachings in the church exists among many of its members. (You can read all about it on the front pages of the New York Times.) Some traditionalists in the church resist Pope Francis’s efforts to enact changes in the spirit of Vatican II. Such measures are not seen as Spirit-inspired reforms but viewed by some as sell outs to the world—“world” as in the world, the flesh and the devil, not as in God so loved the world. But three points need to be made to the fearful.

First, changes made by Vatican II were not only about opening the church to the modern world (aggiornomento,) but just as crucially about renewing the church’s Christocentric mission. The deepening and development of Christian theological self-understanding embraced in Vatican II (ressourcement) is a tremendous accomplishment. It amounts to a deeply conserving renewal of the faith. The spiritual impetus and energy of the council is still emerging, with Pope Francis as its servant of the servants.

Second, Francis is the most traditional of Christians. He is completely imbued with Christ’s words, Christ’s example, scriptural teaching, Gospel joy and trust in the Holy Spirit. He embodies Christ for millions who are responding to his humility and merciful benevolence.

Third, traditionalists can be enlightened by new historical analyses of the relations between the church and the world that produced our secular age. Philosophers like Charles Taylor along with other scholars now credit Christianity as the source of the Enlightenment’s ideals of equality, human rights, conscience, freedom and obligation to relieve suffering. The equal value of each individual created in God’s image and the universal responsibility of a free conscience are Christian innovations that did battle with the Roman Empire’s worldview. Peace, forgiveness and the love commandment challenged the reign of violence, power and privilege. Christians once turned the world upside down.

Unfortunately in the course of human history, Christian values were often distorted, coopted and overthrown by powerful regimes. The church itself often became allied with immoral forces in power. Only after centuries of conflict and intellectual development did the struggle for Christian values obtain some common cultural agreements, such as the Universal Declaration of Human Rights. In many of these struggles those on the side of core Christian values might have to oppose established powers, including the church. Present day popes have apologized for sins and failings of the church in the past.

Once mindful of this history, Catholic traditionalists can begin to be less wary and resistant to proposed changes. Too many “secular” values are of Christian parentage. Resistors to Vatican II and the developments at the synod can better acknowledge their separated offspring coming home at last.

Sidney Callahan
Show Comments (
2
)
Comments are automatically closed two weeks after an article's initial publication. See our comments policy for more.
Brian McDonough
6 years 6 months ago
Regarding those Bishops who opposed Francis at the Synod, he has the numbers in his favor. Francis not only "holds the cards," he is the "House." Francis has appointed 32 Cardinals since February 22, 2014 or about 16 Cardinals a year. 18 of them are younger than 70, and 26 are younger than 80. Francis need only appoint 35 more Cardinals younger than 80 to have appointed 61 Cardinals younger than 80, and he will have appointed a majority of the 120 Cardinals younger than 80 who shall elect his successor. It is probable that Francis will reach that number over the next 3 years because 46 current Cardinals are over 85, and 22 of those are over 90. The probability that some of these Cardinals sadly may die over the next few years is relatively high, and Francis shall appoint their successors. Francis may also create new Cardinals in places where none existed because he already has done this 5 times. This Bishop of Rome also has been and shall continue to appoint Progressive Bishops and Archbishops [as he just did with Fr. Zuppi in Bologna and Fr. Lorefice in Palermo], some of whom he shall elevate to Cardinals. Finally, if Francis is Pope another 5 years, then 46 of the current Cardinals, who were NOT appointed by Francis, shall be over 80 and unable to vote for a new Pope in 5 years. In 5 years, only 44 of the current Cardinals, who were NOT appointed by Francis, shall be younger than 80 and still be able to vote for Francis' successor; and many of them are Progressive because they voted for Francis as Pope. Therefore, Francis' successor shall be as Progressive as, or more Progressive than, Francis. It is written in the numbers. Francis not only "playa this game," he decides who "playa that game" which chooses his successor.
PJ Johnston
6 years 6 months ago
It's a pity that every major issue in the Church ends up characterized (usually by all sides) as a war between "liberal" or "progressive" modernists who affirm Vatican II and take their cue from "good" secular discourses such as human rights on the one hand and "traditionalists" who reject Vatican II and align with "conservative" social/political discourses on the other. Those are certainly large camps within the Church and their monopoly of the conversation is making it increasingly difficult for anyone else to be taken seriously (or even remain sane), but they far from exhaust the possible range of theological positions. One could definitely conceive of a traditionalist, ani-modernist approach to theology rooted in ecclesiastical tradition rather than secular values that is deeply critical of Vatican II which still affirms the victorious position at the Synod on the Family. Old-fashioned Jesuit casuistry would be sufficient to generate the conceptual room needed to do this. One need not change any traditional teachings about the nature and indissolubility of sacramental marriage or the sinfulness of other sexual relationships to develop a position which permits de facto pastoral toleration of persons in irregular sexual unions. If mortal sin (the only kind which necessitates refraining from communion) requires full knowledge and deliberate consent of the will, all you need to do to move from a "no communion" policy to a "communion" policy is magisterial recognition of the liceity of confessors assessing instances of sinful cohabitation as not fully imputable to the moral agent, for instance due to cultural factors which lead to the impaired judgments of conscience. It can all be done with old-school, premodern casuistry. In short, this dispute does not need to be read through the ecclesiastical "culture war" lens which turns every single issue in the Church into a battle between the exact same two sorry, tiresome parties. It would probably be better if it weren't, because then perhaps we could start cooperating rather than sniping and shooting on sight. Wouldn't "liberals" rather cooperate with "traditionalists" who agree with them on pastoral issues, rather than mistrusting them on the basis of the things upon which they disagree? Wouldn't "traditionalists" rather cooperate with "liberals" with shared goals, rather than telling them they are modernist heretics? If not, we've become more of a Leviathan which runs roughshod over people in the interest of ideological uniformity than a communion that tries to embrace and reconcile people of very different ideological tendencies in sacramental ties of love.