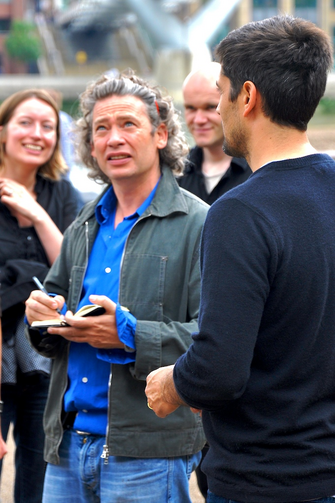 Dexter Fletcher is a British Catholic actor and director whose film career spans more than 40 years, with acting roles stretching from English cinema/television productions like “Hotel Babylon” and “Lock, Stock, and Two Smoking Barrels” to big-budget Hollywood films like “Stardust.” Moving behind the camera in 2011, Mr. Fletcher made his directorial debut with the film “Wild Bill,” for which he was nominated for a BAFTA Award for Outstanding Debut by a British Writer, Director or Producer. He then directed the Scottish musical “Sunshine on Leith,” a critical and commercial success, before helming the new movie “Eddie the Eagle” (20th Century Fox)—a humorous biopic of English ski jumper Eddie “The Eagle” Edwards starring Hugh Jackman that was released to theaters on Feb. 26.

On Feb. 25, I interviewed Mr. Fletcher by telephone about “Eddie the Eagle” and his Catholic faith. The following transcript of our conversation has been edited for style and length.

“Eddie the Eagle,” your new film released in theaters on Feb. 26, is a sports biopic of Eddie Edwards, the first athlete to represent Great Britain in Olympic ski jumping at the 1988 winter games. What inspired you to make a film about him?

I remember Eddie from back in ’88. As a 22 year old in the U.K., I remember we felt at the time that he was a bit of a joke—a bad joke. He was this English guy who came last and made us all look a bit silly. You know, that was the general consensus, really. Obviously, in some towns people were very proud, but the rest of us throughout the country thought: “Oh my God, who’s this guy with glasses and an under-bite and red hair who comes last?”

Then when I read the script I realized in hindsight that, like with any sportsman great or otherwise, there’s a bigger story behind it. And I got inspired by this story as I learned about the huge amount of sacrifices he made and the dedication it takes to get to the Olympics, whether you win or lose. It made me want to retell the story from a more human perspective, because he became a sort of caricature at the time, and I thought in reading the script that we could absolutely look at that again.

He was an inspiration. I thought that if we could make a film that puts a smile on people’s faces and shows a bit of what he went through, it would be a good thing. I liked the idea of creating something very positive.

“Faith-based drama” tends to be a dirty word in Hollywood and among critics, but faith often surfaces as a theme in sports biopics like “Rudy.” What role does faith play, if any, in this movie?

Certainly, what is so wonderful about Eddie is that he has faith in himself and in his own ability. He has a belief in himself and I think that’s where his strength lies. That’s what makes him so admirable and that’s why you go with him on the journey—because he believes in himself and that’s unwavering.

He’s sort of beset on all sides, with some people saying: “No, you can’t.” People are singling him out as the guy who’s not good enough, but he stays the course and realizes his dream. So in that respect, I think faith plays quite a big role. Whether that’s a spiritual faith or not, that’s another matter, and you’d really have to talk to Eddie about that. But it’s certainly a personal belief and I think that comes down to the same thing.

What was the best part of working on this movie for you?

Like I said in the beginning, I had a chance to retell a story that people thought they already knew or that they had made a lot of assumptions about. The really satisfying bit is seeing that audience reaction at the end—you know, I don’t watch the film anymore, I watch the audience—when they’re rooting for this very simple guy from a simple background who achieves his dreams and his goals. And to see people understand that and go with him on the journey is a really satisfying feeling.

You are a Catholic and Hugh Jackman (who stars as Eddie) is a Christian, but some people find it hard to reconcile faith with a career in show business. What keeps you grounded and sustained in your own faith?

I don’t know why there should be any disconnect between the two things. If Catholicism suits you and that’s where your heart lies, then I think it just becomes a stabilizing part of who you are. Faith is a personal thing, and you can adopt it and practice it in your own way.

So I don’t see why there would be any disconnect with them, but I’ve never even thought about that personally. You know, you could lose as much interest in good things with film and entertainment as with anything else, and I think my film about Eddie shows that it doesn’t need to happen. There’s no swearing in “Eddie the Eagle.” There are a couple of sexual references, but nothing that’s going to make anyone’s hair curl. It’s a story about a good man who believes and goes the distance.

Do you believe it’s possible to make a good movie about good people?

My last two films have been along those lines. I like the idea that you can make a film that generations of families can sit down and watch together, young and old, and I think people appreciate that at the end of the day. There’s so much out there where things explode and people die—you know, robots appear from outer space and everyone’s swearing at each other—and yet people are equally happy without all of that in a movie. But they don’t even know it, to be quite honest, which is what I find amazing. They watch “Eddie” and then it dawns on them afterwards that there’s no swearing in it at all. Then they say to each other: “Really? Oh yeah, you’re right.”

Who have been your biggest role models in the faith, either living or dead?

I’d say it’s my wife, really. It was her faith and it was very important to her, so it likewise influenced me. I had a very close Catholic friend and I asked him to be my godfather when I became Catholic. Then it turned out that he realized he hadn’t been Christened himself, and so I had to turn around and become his godfather! (laughing) So it’s quite a strange case but nevertheless it worked out well.

The Catholic Church has sometimes had a difficult relationship with Hollywood in the past. If you could say one thing to Pope Francis about moviemaking, what would it be?

I don’t know too much about the difficulties. That may be the case, but I don’t see the problem. There’s room for everybody out there—I’m sure the pope would agree on that!

You worked as an actor for nearly 40 years before first taking the director’s chair in 2011. How has your experience in front of the camera influenced your approach to directing?

I started acting at a very early age and I’ve been lucky enough to work for interesting directors from many different backgrounds and influences. One of the biggest assets I bring is that I understand that actors all have a different process—each one is different from the next—and I really want to see the process and appreciate it. I want to get everyone on the same airplane, as it were, because we’re all heading for the same destination even if we’re coming from different routes. Coming from an acting background, having worked with so many actors and directors, I kind of “get” that everyone’s going to go a different way about it and everyone wants to reach the same place.

So certainly, from the acting side of things, I love actors. I love what they do and how they do it. They do it in completely different ways and I’m fascinated endlessly by it. That’s one thing that comes out of working on my films: The actors always feel supported and secure. And that’s when you get really great performances from people.

I’m very proud of the film; I’m proud of the questions it raises about inspiration and believing in yourself. I think people will go see it and it will make them feel good. It’s not a bad thing to have a film out there that makes you feel good and inspired. And maybe the next day you’ll feel inspired to do something you’ve been putting off for a while because you think “I can’t do it.” Maybe you’ll come out of this film thinking “I can do it” and give something a go. Like he says in the film, it’s about participating more than anything else: Giving it a go.