Is Heaven Open to Animals? 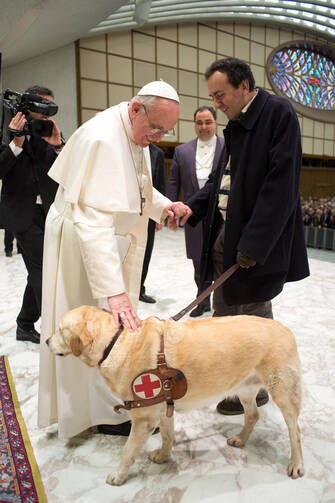 Update: It turns out that Pope Francis did not say that animals are going to heaven.  Paul VI said it.  The illuminating tale of how this supposed quote ended up on the front page of The New York Times is covered by David Gibson here at RNS.  It's an excellent piece of journalistic sleuthing.  The only way that story could get any more complicated is if in a fews Pope Francis actually does say something about animals in heaven.

This morning, with a front-page article in The New York Times, there is a great deal of talk about Pope Francis’s comments about animals being allowed into heaven. Apparently comforting a child whose pet had just died the Pope, at his weekly audience said, according to most news sources, “One day we will see our animals again in eternity of Christ. Paradise is open to all God’s creatures.”

What did the Pope mean? What does it mean for us? And for our pets? And for animals?

First of all, it’s important to note that this was an apparently off-the-cuff remark from the Pope to a child, and, as Charles Camosy, a professor of theology at Fordham University and author of the book For Love of Animals: Christian Ethics, Consistent Action, noted, it was essentially a pastoral response to a child, and needs to be understood as such. It was also notable that, as far as I can tell, the Vatican did not release the Pope’s official remarks.

Overall, there is a question of the authority of an off-the-cuff comment at a papal audience. As most Catholics know, there are different levels of teaching authority and different kinds of church pronouncements, as well as, more basically, a “hierarchy of truths." In the simplest terms, the highest level would be what Jesus says in the Gospels, and from there we would move to the beliefs expressed in the Nicene Creed, and then to the documents from the various ecumenical councils (for example, the Second Vatican Council's Gaudium et Spes) and on to papal encyclicals (like Pope Francis's Evangelii Gaudium) , and then to other papal documents, and on down the line to pronouncements by your local bishop, and then to what your local parish priest says about a particular political issue. So what your local parish priest says about a local political matter is not as essential as believing in, say, the Resurrection. And, in terms of church teaching, not every utterance by a Pope is Gospel.

Interestingly, the Pope's comments actually seemed to go against what Pope Benedict XVI and other recent popes have held. The Times offered a helpful summary of the historical line of Catholic thinking.

The question of whether animals go to heaven has been debated for much of the church’s history. Pope Pius IX, who led the church from 1846 to 1878, longer than any other pope, strongly supported the doctrine that dogs and other animals have no consciousness….Pope John Paul II appeared to reverse Pius in 1990 when he proclaimed that animals do have souls and are “as near to God as men are.”….John Paul’s successor, Benedict, seemed to emphatically reject his view in a 2008 sermon in which he asserted that when an animal dies, it “just means the end of existence on earth.”

Nonetheless, Pope Francis’s comments, though “pastoral” and though off-the-cuff, offer an important insight into the Pope Francis’s mind and also seems to reflect a change in what many Catholics believe—myself included.

What does it mean for us? To my mind, Pope Francis was not only comforting a child, but also reminding us of the holiness of all creation, and all creatures. God, in the Book of Genesis, pronounces creation as "good." God sees all creation as holy, and you could say that Jesus Christ not only becomes human, but becomes enters into creation.  (But not a creature: he is "consubstantial," that is, "one in being" with the Father.  Or not "created.")  Nonetheless, he enters into creation.  This is, after all, the meaning of Christmas: in the Incarnation, the Second Person of the Trinity takes on flesh. You could take that even further, as other theologians have done recently, and say that Christ becomes matter, and so redeems all matter. Thus, you could make the theological argument that Christ—in his life, death and resurrection—redeems not only all humanity, but all of creation. And of course all creation includes all creatures. St. Paul writes in his Letter to the Colossians that through Christ God reconciles “all things (Greek: panta) to himself, whether on earth or in heaven” (Col. 1:20) And in his Letter to the Romans he speaks of “all creation” (Greek: ktisis) groaning and waiting to be set free from bondage (Rom. 8:19).

To my mind, however, what Pope Francis said is clear. He's not trying to obfuscate and he does not say anything to children that he does not believe: The Pope believes, in his own heart, that paradise is open to all creatures.

In general, of course, we have to be exceedingly careful about what we say about heaven. Because though we have centuries of church teaching on the matter, the only person who can speak to us with any authority, with any personal experience, on that topic is Jesus. And in this case, Jesus said nothing about animals and the like. Thus, much of our speculation about heaven falls under the general theological category of “Who knows?” When we speak about the "last things" we have to do so in humility. But many of us have had enough experience with pets that we could say that there was love between the person and an animal. And why would God destroy those kinds of relationships?

About 20 years ago, during my time working with the Jesuit Refugee Service in Kenya, I had two dogs--two small black labs that we got from the Kenyan Society for the Protection and Care of Animals. My fellow Jesuit and I called them Calvin and Hobbes, after the popular comic book characters. And I have to say that I loved both of them. After my two years ended, the day before I left to return to the States, I gave both Calvin and Hobbes a big hug. (I had moved to another Jesuit community by then, where dogs weren't allowed.)

Sometimes, when I’m thinking about my time in Kenya, I wonder if I’ll ever see Calvin and Hobbes again. My answer: I hope so. And I hope the Pope is right.

James Martin, S.J.
@jamesmartinsj
Show Comments (
2
)
Comments are automatically closed two weeks after an article's initial publication. See our comments policy for more.
Bruce Snowden
7 years 9 months ago
Years ago in a class discussion as to whether or not animals such as pets will be in heaven, the teacher responding said, "Whatever is needed to make YOUR heaven perfectly happy,YOU will have." A pretty good answer I'd say. Besides pets, I'd like to share heaven with all scriptural animals significant to Redemption History, like Abraham's Ram, Noah's Dove, the millions of Lambs and other animals offered in Temple Sacrifice, the animals in the Animal Shelter where Jesus was born if any, others, even Eden's serpent if there was one - well, about that serpent I'm not too sure! Maybe our pets, other animals won't be in heaven in the flesh, but all of God's material creation in everlasting and original thought will be there. God is the source of all life and that life he formally shares with all creation. That life returns to God when creatures die and in that sense perhaps our pets, all animals will share everlasting life in heaven with humanity.They will be there in all their glory in the mind of God and in the heart of Jesus. Come to think of it, heaven will be packed with animals - human animals which we are, but glorified!
Tom Helwick
7 years 9 months ago
I'm inclined to agree with Will Rodgers who once remarked, "If there are no dogs in heaven then I want to go where they are." I couldn't agree more!