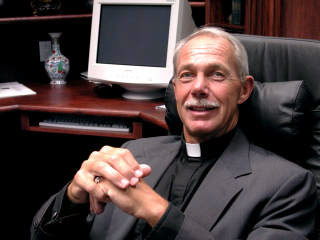 The joining of the publisher’s role with that of the president of America Press is an early outcome of the press’s strategic planning process which will conclude in late February. As president, Father Schlegel succeeds Father Drew Christiansen, S.J., who will remain America’s editor in chief. The publisher’s position has been open since the resignation of Ms. Jan Attridge, the press’s first publisher, in April.

Father Schlegel, a weekly reader of America, expressed enthusiasm at taking on a new ministry. “America,” he said, “is a vital national Jesuit apostolate bringing Catholic opinion to bear on the great public issues of the day. I am grateful for the opportunity to help secure and improve America’s presence in today’s new media environment.” He was buoyed in his decision, Schlegel said, “by the encouragement of brother Jesuits, friends and colleagues that America is the right challenge” for him to take on at this time.

Father Schlegel was ordained a priest in 1973. He holds a doctorate in international relations from Oxford University. In addition to his presidency at Creighton (1999-2011), he also served as president of the University of San Francisco. Under his leadership, Creighton carried out its most successful philanthropic effort ever, raising $400 million in a capital campaign. He oversaw the expansion of the campus from 90 to 130 acres, improving the campus living environment and contributing to the renaissance of downtown Omaha. During his time, the university also received high rankings in both regional and national listings of institutions of higher learning.

Albert C. Pierce, chairman of the America board, in announcing the appointment, said “Father Drew Christiansen has ably guided America through a new phase in its 100-plus year history, and we salute him for his continuing contributions to this wonderful ministry.  I join everyone at America in welcoming Father John Schlegel, who has all the right experience and expertise to lead us into the next phase in America’s history.  These are exciting times for America!”

Father Christiansen, the outgoing president, joined America in the fall of 2002 as a part-time associate editor and became editor in chief and president in 2005. He has seen the communications ministry through a period of major transitions. He hired a talented staff of lay editors, oversaw the change of the press’s legal structure, instituted a mixed lay and Jesuit board of directors, expanded America’s web presence and in 2009 led the centenary celebration of America magazine. This past year the Catholic Press Association awarded first place for excellence to America in the categories of general interest magazines and magazine-sponsored web sites.

Ms. Attridge, the retired publisher, came to America after 30 years in non-profit administration in Catholic healthcare and for religious congregations. During her tenure, she helped implement changes in the legal structure of the press, conducted surveys of current and former readers, developed partnerships with other Catholic groups, labored ardently for the interests of young readers, and strove to enhance America’s digital media. “Her lasting legacy,” Father Christiansen said, “was to make us think of ourselves as a communications ministry, not just a print magazine.”  --America Press release.

I always find the Jesuit Universities to be a "home" of sorts - I love the campuses (with the wonderful sculpture), the free flow of ideas, and the liturgies.

Those Jesuits who bring the "Catholic perspective" to this country are deeply written into our history and identity as Americans.

I continue to be fed by this Jesuit ministry of communications.  Thank you.
Fran Rossi Szpylczyn
11 years 4 months ago
Welcome and many blessings as you begin this new work. I echo Beth's sentiments - and should add that she and I came into community at the America website. Good things happen here and of course in print.