In the Green Tradition 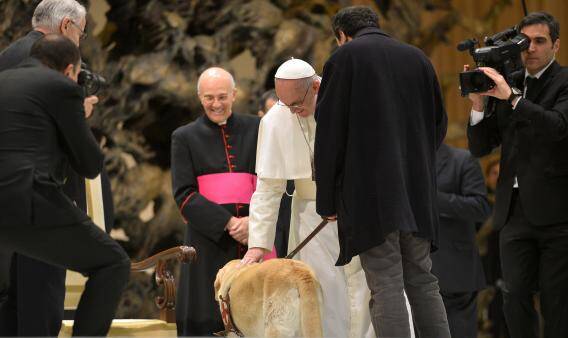 Catholic greens had reason to sound exclamations of joy at today’s inaugural papal Mass. From the announcement of the new pope’s name, Francis, there was speculation about whether Pope Francis would show the same sensitivity for nature that saint who preached to the birds, loved the wild places and tamed the wolf of Gubbio.

Over the weekend, there were hints at the new pope’s meeting with journalists. Asked to explain his choice of name, he said the inspiration came from another Latin American cardinal, who whispered to him as he was elected, “”Don’t forget the poor.” The new pope commented on the attractiveness of the name, Francis: “the man of poverty, the man of peace, the man who loves and protects creation,” the same created world “with which we don’t have such a good relation.” At the end of audience, the pope greeted a blind journalist accompanied by his guide dog, and the pope, as he took the man’s hand, leaned over to pet the dog.

This morning in a pre-inaugural address to the people of Argentina, Pope Francis underscored the theme of creation care. Speaking to the crowd assembled in Buenos Aires Plaza de Mayo, he thanked the people for their prayers and told them: "I have a favor to ask. I want to ask that we all walk together, caring for one another ... caring for life. Care for the family, care for nature, care for children, care for the aged. Let there be no hatred, no fighting, put aside envy and don't gossip about anyone."

In his homily, honoring Saint Joseph, the patron of the universal church, for his care of the Holy Family, the new pope meditated on Joseph’s role as protector, using the Latin word custos, i.e. guardian or warden, the term, incidentally, Franciscans apply to their religious superiors. Four times in the homily he cited protection for creation as one of the virtues expected of today’s church.

“Let us,” he urged, “protect Christ in our lives, so that we can protect others, protect creation.” It means he explained in his simple way, It means protecting all creation, the beauty of the created world, as the Book of Genesis tells us and as Saint Francis of Assisi showed us. It means respecting each of God's creatures and respecting the environment in which we live.”

Pope Francis continued to lay out a Christian ethic of care. “It means protecting people, showing loving concern for each and every person, especially children, the elderly, those in need, who are often the last we think about. It means caring for one another in our families: husbands and wives first protect one another, and then, as parents, they care for their children, and children themselves, in time, protect their parents. It means building sincere friendships in which we protect one another in trust, respect, and goodness. In the end, everything has been entrusted to our protection, and all of us are responsible for it. Be protectors of God's gifts!”

He made a special plea to world leaders to join him in this ethic. “Please, I would like to ask all those with positions of responsibility in economic, political and social life, and all men and women of goodwill: Let us be protectors of God’s creation, protectors of God’s plan inscribed in nature, protectors of one another and of the environment.”

While he warned against “’Herods’ who plot death, wreak havoc and mar” humanity’s “countenance,” his message was a positive one, calling for goodness and tenderness in the treatment of the others and the world. Addressing the hard-heartedness many presume to be necessary for survival in this world, he declared, “We must not be afraid of goodness, nor even of tenderness!”

In concluding his homily, the pope spoke of the role of the Bishop of Rome as a protector. “To protect Jesus with Mary, to protect the whole of creation, to protect each person, especially the poorest, to protect ourselves: this is a service that the Bishop of Rome is called to carry out, yet one to which all of us are called, so that the star of hope will shine brightly. Let us protect with love all that God has given us!”

On this day of the formal inauguration of his Petrine ministry, Pope Francis left no doubt that he believes, like his predecessors, Pope John Paul II and Pope Benedict XVI, that protection of creation is at the heart of the church’s work in the modern world.

Drew Christiansen
Show Comments (
6
)
Comments are automatically closed two weeks after an article's initial publication. See our comments policy for more.
Daniel Misleh
8 years 8 months ago
Thanks, Fr. Drew. Those of us at the Catholic Coalition on Climate Change (catholicclimatecovenant.org) couldn't be more pleased. We are enormously grateful for these early signs that Pope Francis, like Pope Benedict XVI before him, will continue to draw attention to the needs of the poor and urgent environmental issues including climate change.
Rob Sisson
8 years 8 months ago
As a Catholic, Republican, and president of the only organization the US for Republicans who care about environmental protection, I am thrilled by Pope Francis' statements on creation care. I, too, look forward to watching him build upon the work of his predecessor. Not that it helped, but I prayed to St. Kateri and St. Francis for their intercession to guide the Holy Spirit in the conclave. I continue that daily practice, with intention that the Church will become the leading global voice on climate protection. And may God bless Dan Misleh and the Catholic Coalition on Climate Change.
Rick Fueyo
8 years 8 months ago
This was a wonderfully refreshing statement from Pope Francis.
David McDonald
8 years 8 months ago
The fact that these were among the very first words of spiritual direction offered by our new Pope, makes me feel hopeful in a way that I haven't experienced for a very long time.
Richard Savage
8 years 8 months ago
There seems to be a lot of green wishful thinking here. No surprise; the green world is full of wishful thinking. However, I note that Pope Francis has a Master's Degree in Chemistry; bad luck, he might understand the Scientific Method – unlike his predecessors and the like of Mr Misleh. Oh dear. In case you never heard of the Scientific Method, it requires considering all hypotheses to explain a natural phenomenon; then one tries to prove them false. The current gang of “climate scientists” has a single hypothesis of (manmade) climate change: it's all due to carbon dioxide, and they're going to prove it so. Science? No! As I read the Pope's remarks, it's entirely about the poor. One might think he's talking about people whose greatest need is for cheap electricity, so they don't have to cook their food over open fires of wood and dung inside their homes – saving their children from pulmonary disease. Let me remind you – the WHO says 4 million children under age 5 die of that each year. Helping the poor might even be more important than worrying about hypothetical “global warming” (there hasn't been any for 15 years now). Not my opinion; so says the UK Met Office. NOAA and NASA allow only a decade. If the climate can warm or cool every year, and you have ten years of no warming...if you flip a fair coin ten times, what's the chance of ten heads....1/2 x ½ x ½ x ½ x ½ ½ x ½ x ½ x ½ x ½ ...yes, less than 0.001. But the Climate Clowns told us...continue to tell us...it must get warmer...still waiting.... Cheap electricity would allow the poor to have a refrigerator to store fresh food, and to have a radio or TV to have access to news of the world, or even a computer and access to the Internet. Electricity would end their dependence on gathering wood; would pump fresh water; would provide air conditioning. Perhaps Pope Francis meant to address the real concerns of the poor. For example, the elderly pensioners in Britain, undergoing a very harsh Winter. Untimely deaths this Winter (it's still going on) are expected to top 30,000. Perhaps the Pope will ask the USA to stop turning 40% of its corn crop into ethanol and make it available for food. Perhaps the disciple of Francis of Assisi will be distressed by the slaughter of thousands of eagles, hawks, bats, and small birds in the blades of the obscene wind turbines all across the UK and the western USA. I am. Since Francis is not from Europe, the heart of the climate change nonsense, he may look on it with the well-deserved skepticism of the rest of the world. Let's hope so.
Marina DeLuca
8 years 8 months ago
Protecting the environment is a philosophy that no rational thinking person would take issue. If that were the only question at hand on the world political stage, there would not be a debate. The problem, however, is that the far left has hijacked the notion of protecting the environment and turned it into a cause for massive tax and wealth redistribution schemes. But the most venal aspect of this movement is the fact that it embraces the notion that God did not foresee a world in which man would develop machinery and other energy consuming instruments that would utilize the minerals that He provided as reasonable sources of energy. Them as it’s final and most offensive act, this movement has set up and worships a false god, they call Gaia. And you think sound-thinking Catholics, including Pope Francis, is going to follow those satanist down the path to hell? I don’t think so.