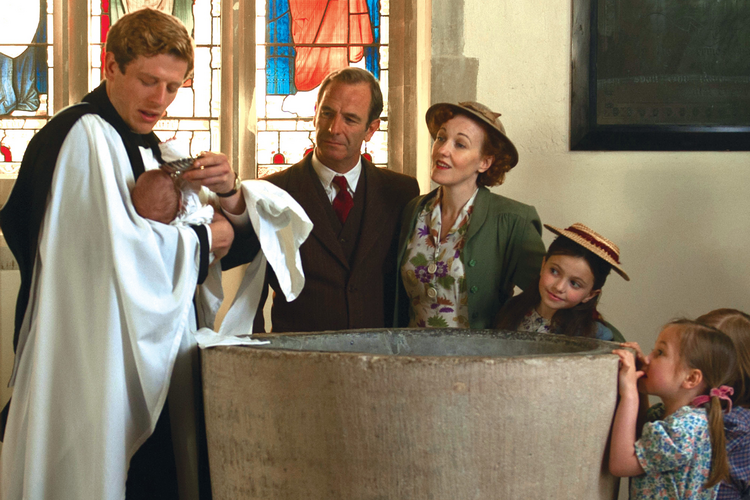 The PBS Masterpiece Mystery series “Grantchester” concluded on Sunday, May 1. “Grantchester” had several things going for it even beyond its attractive protagonist, Sidney Chambers, an Anglican priest who teams up with a local policeman to solve murders in the village for which the TV drama is named. Set in the 1950s, the program offers a nuanced view of the times and the recently ended war, a war that still haunts Sidney.

Like another British series, “Foyle’s War,” it attempts to honestly engage with the period it’s set in. It doesn't preach, but neither does it shrink from showing the prejudices of the era as they affect Sidney and the other characters who appear regularly: Sidney’s dour housekeeper, Mrs. Maguire; his shy, homosexual curate, Leonard; his partner in crime-solving, Inspector Geordie Keating.

Convincing period details, interesting characters, fine acting, missing or murdered bodies—most of the British mysteries that make their way across the Atlantic have all of these. What set “Grantchester” apart was its Christian point of view and the writing. Based on a series of short stories by James Runcie, The Grantchester Mysteries, and written by Daisy Coulam, the series went beyond the usual conventions of the detective drama. Featuring characters whose life stories and struggles the audience comes to know and care about over the course of two seasons, “Grantchester” provided greater depth of characterization and more dramatic heft than the usual episodic detective-mystery.

The central conflict that frames the series, one that operated both as back story and sometimes took center stage as well, is the star-crossed romance between the vicar and Amanda Kendall. The different murders Sidney investigates are incidental to this plot strand but central to the more durable and constant partnership in his life, his friendship with Inspector Geordie. The detective is overworked, hard-bitten and abrupt, but he, like Sidney, needs a friend. The two of them share a passion for justice but not a religious faith, and the divergence between Georgie’s outlook and values and Sidney’s adds an extra layer of texture and tension to the action.

Murders abound in the mysteries that air on television, but usually they happen early or off screen. They rarely have a strong emotional impact on the viewer; entertainment, not heartbreak, is what the genre is about. But “Grantchester” doesn’t steer clear of tragedy. Crimes are solved from week to week on the series, but justice does not always prevail. Unlike most detective dramas, the series isn’t afraid to be dark.

PBS has given us two recent mystery series featuring clerics: “Grantchester” and the “Father Brown.” I enjoyed watching “Father Brown” when I saw it, but I didn’t always see it. I made a point of watching “Grantchester.” Eschewing the formulaic, it embraced ambiguity and complexity. Much as I imagine a good priest might be, it managed to be both Christian and worldly. I mean the latter in the most positive sense of the word: wise to the ways of the world and how people operate in it—realistic. “Grantchester” showed us vulnerable people acting out of a mix of motives and failing themselves and others as people do. With a dishy unmarried man as its hero, it deftly traced the small, slight overtures people make when attracted to another, the conversations and gestures that sometimes lead to enduring relationships but more often than not are sign posts along the road not taken.

At the center of the drama, the cynosure of it, is Sidney: intelligent, handsome, compassionate, utterly and perhaps improbably winning. Omar Sharif once described Dr. Zhivago, probably his most famous role, as “a perfect man.” In “Grantchester,” Sidney, played by James Norton, comes close to being another. It troubled me when in the penultimate and final episodes he was described by his friends in Grantchester as “a saint.” That struck me as undeserved and overstated, fawning on the part of those saying it and on the part of the makers of “Grantchester,” too.

Having said that, Sidney is pretty much everything a priest is supposed to be, and the drama is a paean not so much to what a good priest can do as to what a good priest is. Sidney can’t stop violence from happening, but his presence supports the victims of it and sometimes even the perpetrator. That he himself is vulnerable to misery, doubt, depression and occasionally drink makes him human and in need of the same forgiveness he advocates for others. While some of the events of the last episode seemed inspired by the sex abuse scandal in the Catholic Church, there is nothing revisionist or remotely anti-clerical about “Grantchester.” It depicts a priestly ideal, the priest as everyone would want him to be.

Since watching the finale Sunday night, I’ve read that ITV in Britain is going forward with a Season 3, which PBS hasn’t yet scheduled or bought. Even if it doesn’t, Sunday’s conclusion offered a satisfying resolution of conflicts and several small and not-so-small miracles along the way. The meek curate screwing up his courage to confront the arch-deacon and inform the police that the arch-deacon has been hiding a clerical sex offender; the parents of a murdered teenage girl forming a friendship with the mother of the young man unjustly executed for her murder; the embittered Mrs. Maguire telling Amanda to be happy. In the world of “Grantchester,” these are significant steps forward in courage and charity.

The biggest surprise was a pregnant Amanda choosing to leave her husband. It was a turn of events that viewers couldn’t but find simultaneously welcome and thought provoking. A path is cleared for Amanda and Sidney to be together, but how will he—how will she—explain her decision? What will her presence mean for his job and his ministry? One of the consistent strengths of “Grantchester” is that it makes clear that for Christians, no less than for anyone else, there are no easy, automatic answers to the hard questions in life.

Show Comments (
5
)
Comments are automatically closed two weeks after an article's initial publication. See our comments policy for more.
Joshua DeCuir
4 years 4 months ago
Amen! Fantastic series.
Nancy Walton-House
4 years 4 months ago
I loved the series too for its humanity and realism. I especially appreciated the forgiveness and reconciliation between Sidney and Geordie in the closing episode of Season 2. I am confident PBS will buy Season 3 to be made by ITV1 in 2017. So we have a long wait for it and I am sure the wait will be worthwhile.
Crystal Watson
4 years 4 months ago
I liked it too and it did remind me of Foyle's War. Very different from a past US series about an Episcopal priest, The Book of Daniel, though I liked that one too.
Anne Chapman
4 years 4 months ago
I am also a Grantchester fan. True quality programming with religion that is not cloying. I can't imagine that PBS won't renew, but haven't checked the viewership numbers.
Joshua DeCuir
4 years 4 months ago
Couple interesting tidbits about James Norton, who plays Sidney Chambers. He was educated by the Benedictines at one of the most famous Catholic boarding schools, Ampleforth College, & later studied Theology at Cambridge. Certainly think these experiences lend themselves to the complexity of the character he plays.
Advertisement