A God Real Enough to Be Absent: II

Cambridge, MA. Several weeks back I wrote about medieval Cistercian monk John of Ford’s reading of the last verse of the Song of Songs, “Flee, my beloved, and become like a gazelle or a young stag upon the mountains of spices!” My point — and I am not sure I convinced any of you — was that we miss an opportunity in discussing the presence/absence, existence/non-existence of God if we reduce the matter to arguments about whether God exists or not, or if we think we do our faith a favor by insisting with certainty that God is everywhere, faithful to those who seek God, etc. I summarized John’s view, that the divine lover was in fact once again — as in preceding sections of the Song — leaving his beloved. But the underlying point that fascinated me was that this God was/is indeed one who can be absent as well as present, somewhere else as well as here. Much of the life of faith is, for many of us, about God’s being not here in any way that can be felt, noticed, enjoyed. So there is much to be learned by reading the Song and John of Ford’s comment on its last chapters, much that could help us sort out the life of faith even today.

But as you know, I am also a comparativist, who has studied certain strands of Hinduism for decades. On this topic, like almost any other, I also believe that we can learn about God’s arrival and departure, coming and not-coming, from Hindu texts. To show this here, I return once again to a text I’ve discussed many times in this space, the Tiruvaymoli of Shatakopan, the ninth century Hindu saint. Since I chose the last verse of the Song, I will likewise introduce to you the last of the young woman’s songs in Tiruvaymoli: “Krishna, you have no compassion, you have no compassion / when you touch my full breasts,  / when by that touch there swells a flood of joy beyond even the skies, that never crests,  / encompassing and drowning my mind, but then ending like a dream; / deep deep desire enters inside me but, alas, this is nothing a soul can bear; / separating from you now still worse; your going to herd the cows is murder." (X.3.2)

The scene is a poignant one, the commentators explain. By the secular/religious conventions of this poetry, the man and woman, unmarried but in love, have spent the night together, and now he is leaving. He is a cowherd, off to the fields where, unfortunately, there are not only cows, but natural and demonic dangers and, she fears, other women he might dally with. What is true in the natural scenario of the cowherd village, is here found to be true of the divine Krishna and the human who loves him — he has been intensely present, in a long night of a most intimate union, but she now sees that such moments guarantee nothing: the God who comes by surprise is also the God who can leave just as suddenly.

Unlike the woman in the Song, though, this woman does not urge him on his way; she begs him not to go, not to be so cruel: “Your going to herd the cows is murder, with hot sighs my soul burns,  / there is no one to help me, / I still exist but do not see your ink-dark body in its dance,  / when you go, it is not just a day that passes, my eyes (slender like small fish) never stop filling with tears: / born cowherd girls in the cowherd clan, we are lowly, our loneliness is death.” (X.3.3) Her agony, the commentators say, is all the harder because he has already been present: those who whom God has never meant anything cannot understand how the absence of God is a torment. All night, she has learned him in many ways and in vivid detail: each part of that, once joy, is now a source of pain, as he leaves her. 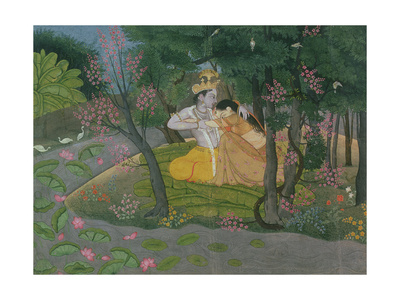 The clearest parallels to this situation are perhaps the most famous instances — e.g., Mother Teresa’s many decades of a dark faith, working without any immediate sense of God’s presence. Yet we do not need famous examples. I suspect that some of my readers — or people you know — have had this same experience: God, once so much a part of my life, has now gone away, and all I am left with is memories. Better not to have loved in the first place, if now that Beloved is leaving me.

The woman in the song does not let up her lament. Verse 9, just before the end, conjures up the possibility of supernatural dangers out amidst the cows (as if cow-herding were a dangerous job), but also offers, it seems, a supreme offering: stay here, even with other women — I give you up, renounce what I as a woman want most, your being with me in particular — just to keep you near by, even if with others and not me: “If you stay here with these good women who please you / and banish entirely our mental anguish, our joy will be wonderful, / now we cannot tolerate our womanhood, my lord, don’t go to herd the cows — / many demons are coming, by whatever forms they choose, by Kamsa’s order —  / if you fall among them there will be calamities with them and you— heed my word — oh!”

The great 20th century Srivaisnava commentator PB Annangarachariar indicates that by tradition this song is one of those in Tiruvaymoli most indicative of the nature of true love for God; in it, this verse is perhaps its most pure, vivid: to keep God nearby, you give up God; what you had of God you leave to others, that God may not leave entirely.

The old commentators — Nanjiyar, Nampillai and others — make much of the fact that this song ends inconclusively. Just as the Song ends with the woman telling her beloved to flee, while we hear no more and do not know whether he does go, so too here. In her passionate, heightened state, the woman is sure that the intense pleasure of the night is about to give way to absence; yet we hear nothing from him — Krishna — and do not actually know that he is going away, or even intending to leave. But perhaps this too is part of the psychology of the absence of God: it may be all in one’s head, but faith is in the head of that particular person who cares most intensely for God, and knows what it means for the beloved to be here, or not.

Thus this second installment, my second effort to convince you that imaging a God real enough to be here or absent, arrived or failing to show up, is in a certain way an advance over the more comfortable views, theistic or atheistic, that God either is or isn’t. I also think that doing what we’ve just done — reading in the Biblical and Hindu traditions — makes things worse and better at the same time. But more on that in Part III, which I promise will come shortly, and be short as well.

Francis X. Clooney, S.J.
Show Comments (
2
)
Comments are automatically closed two weeks after an article's initial publication. See our comments policy for more.
J STANGLE
11 years 8 months ago
Well, I don't see too many comments about this topic, so I'll figure out something to say. To begin with, I think your, "thesis" about the apparent absence -or, coming and going- of God contributing to the discussion with atheists and others has merit. On the other hand, pinning this discussion on the last verse of the Song of Songs and some writings referring to Krishna might require much more work - at the least regarding the exegesis of The Song of Songs. My expertise - if you could barely call it that - is with the Psalms. I think you will find some, "absence of G_d expressions"  there, for sure. Still,  can you convince an atheist -using these texts- that certain yearnings and desires they have are somehow really a search for God, and not just some hormonal pulse? I actually think you might succeed better using the Hindu texts as it might be possible for a person to think that they arise from, "nature" or, "natural" knowledge or from a deep and ancient sense of what is as reflected in maybe a sort of, "unconscious"  intimation of reality and how it comes to be and is. Not that the Old Testament doesn't also do this, but it is perhaps less acceptable, being part of one's culture that one thinks one knows and understands, and so can more easily reject.
Marie Rehbein
11 years 8 months ago
I wonder if it's all in our heads, as is implied in the last paragraph of this article.  The concept of omnipresence may not be the result of putting into words the experience of God, but is more probably a logical conclusion coming from contemplation of the nature of what God must be in order to be God, which may even have prehistorical origins (Zoroastrianism).

In contrast, subjective experience relies on sensing, or not, the presence of God - whatever that means, since we cannot seem to describe it adequately, but seem to know it when we feel it.  The question seems to be which is the objective reality?

My sense of it is that even an omnipresent God has the capacity to become more or less discernable, and that to some extent this is intentional, so that we are able to make overtures that will be rewarded.  I think it is an affirmation of our having been granted free will.

What of the case of someone's overtures apparently being disregarded?  There is only the example of Mother Theresa.  However, I recall that in her case she more or less requested having her devotion tried in a manner which would be consistent with not being able to discern God's presence.

The previous article on this topic focused on the command to "flee", which I personally interpret as an attempt to exert control in a situation where my preferences would be not in accord with what I know will be the course of events.  The course of events, alas, are that I will be distracted by the day to day.

Comment by FXC: Marie - thanks very much for your comments, which nicely tease out some other possible ways of understanding the divine absence, or what seems to be such. My focus is on the 'dramatic' scenario, which stresses the freedom of God to come and go, but your readings are rooted in tradition as well.