A Global Catholic Climate Movement, None Too Soon 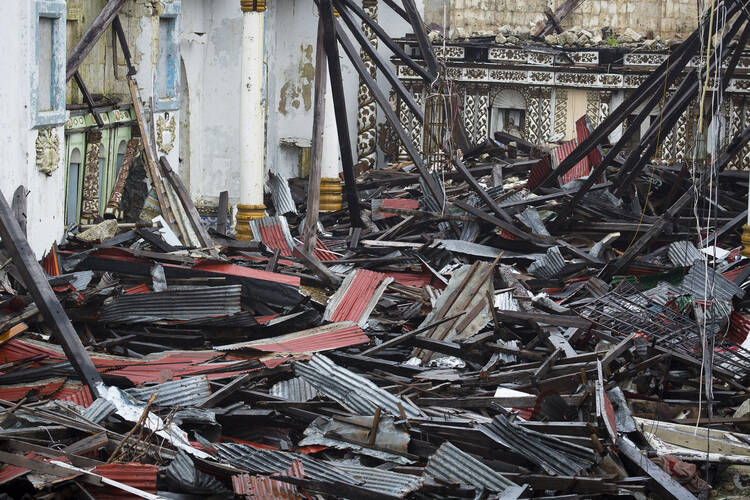 The ice is melting. Species are dying out at catastrophic rates. Storms are devastating vulnerable communities, as is the boom-and-bust of oil and gas extraction. Meanwhile, carbon fuels are cheaper than they have been in years, and politicians have been slow to summon the will to steer our economies toward better sources of energy, or to less energy consumption altogether. The science is plenty clear. This is not what stewardship looks like.

My fellow Catholics, goodness gracious. Usually when I post about climate here, I get denialist comments—comments that not only deny the scientific consensus that climate change is happening and is being caused by human industry, but that attempt to deflect the moral responsibility for doing otherwise. Even as Pope Francis puts the finishing touches on an environmental encyclical, the most prominent Catholic intellectuals, bishops and business leaders register barely a peep on the matter.

That silence, thank God, is getting harder to maintain.

Today marks the beginning of the Global Catholic Climate Movement, a coalition of Catholic organizations determined to work together to confront the climate crisis. It includes groups like the Franciscan Action Network, the USCCB’s Catholic Climate Covenant, the U.S. branch of Catholic Charities, and the Jesuit European Social Center. On the occasion of Pope Francis’s visit to the Philippines, the group will be presenting a statement today to Cardinal Tagle of Manila.

It’s fitting that the GCCM has chosen the Philippines as its starting point, rather than heading to the United Nations in New York, for instance. The climate crisis, after all, is being felt first in some of the poorest communities in the world, such as those devastated by Typhoon Haiyan. Here in the United States, it is Catholics with ties to family members in Latin America who are most concerned about climate.

The time is right for us, the church, to hear the call and step it up. The science is in. But fear gets in the way—of the precarious economy being disturbed, of having to change our ways of life, of opposing some of the richest corporations on the planet. And where there is fear we can bring faith. The GCCM document says:

[W]e recognize that conversations about the climate crisis have historically been more about intellectual arguments than about the profound spiritual and moral implications of our failure to care for God’s creation. Catholic leaders are thus called to speak with a prophetic voice and in a spiritual dialogue with all people, especially those political and business leaders and consumers who engage in climatically destructive policies and practices. And we recognize our own need for ongoing conversion to live more in keeping with the Creator’s intentions for life in abundance for all people. Until the moral implications of anthropogenic climate change are clearly established and accepted, it is unlikely that societies can or will transition in an appropriate timeframe to sustainable technologies, economies, and lifestyles.

I’m usually a bit unnerved when an organization describes itself as a “movement.” That’s a tricky word, a force of spirit and grace and collective energy that can’t simply be willed or named into existence. But in this case, we should hope that the name is a prophecy soon to come true.

Nathan Schneider
@ntnsndr
Show Comments (
3
)
Comments are automatically closed two weeks after an article's initial publication. See our comments policy for more.
Joshua DeCuir
7 years ago
I do not consider myself a climate change denialist, nor do I wish to "deflect" any moral responsibility; but I am skeptical of the kinds of solutions being advanced by this "movement." Ross Douthat had several very good blog posts on this topic this past summer. He discussed various alternative solutions. I hope America will honor its commitment to fair & open debate by giving voice to those who do not agree either with Mr. Schneider or this movement's proposed solutions to climate change. I thought this paragraph summed up my thoughts very well: "But I think reasonable people can differ with this kind of “something must be done, this is at least something, therefore we must do it” take. Do the climate policy options on the table pass a searching cost-benefit analysis? Not so far as I can tell, no. Are we flush at the moment, with plenty of fiscal and economic room to make bad policy bets? No, I do not think we are. Is there a case for focusing first on areas where the problems in our common life are more immediate, and the benefits from wise policy to our household/nation are much clearer — focusing on finding and creating, as it were, more “room to grow” — before we lock ourselves into anti-growth measures with highly uncertain returns? Yes, I think there is. Is there reason to hope that this broadly-shared-prosperity-first approach might actually yield better returns, a better hedge against risk, than a regulation-first strategy? On the evidence of recent history, I’d say yes again."
Dale Lature
7 years ago
thing is , Joshua, you seem to leave out the earth and the ecosystem in your "cost-benefit analysis". The obvious answer would seem to be that the ecosystem is the key value, not the economy, for without the ecosystem, economics has nothing to provide in the way of managing the commons. "Plenty of fiscal room"? Economic problems pale in the face of ecological upheaval. The science on this is MUCH MUCH clearer than any economic theories of "what WOULD happen".....no economic theories of such come anywhere close to the level of certainty of what we are doing to the ecosystem. "Broadly-shared prosperity", as you are describing it , again, simply puts the economic concerns first. This is the KEY mistake. Indeed, to be truly "broadly-shared" and "prosperous", the ecosystem must host that prosperity and not suffer at the hands of it.
Dale Lature
7 years ago
"Economic problems" would also be FAR FAR worse in the ecological crisis as it deepens. This is what putting the economy at the top level of concern totally misses. And the "economic repercussions" of earnest and committed eco-centered changes are reaping economic BENEFITS in places where they are implemented, and so that oft-ignored or denied bit of information would seem to call into question the "economic apocalypse" that conservatives are holding up as reasons to NOT ACT decisively (and neo-liberals as well)