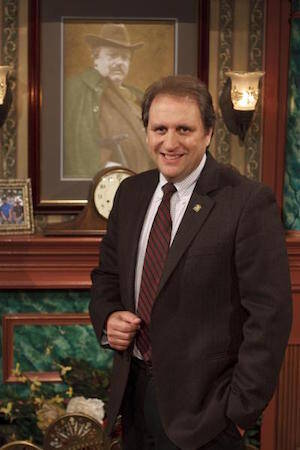 Dale Ahlquist is a Minnesota-based Catholic lay apologist who serves as president of the American Chesterton Society and publisher of Gilbert Magazine. He holds a B.A. from Carleton College and an M.A. from Hamline University.

A leading authority on the British Catholic writer Gilbert Keith Chesterton (1874-1936) and his thought, Mr. Ahlquist has been author, contributor or editor on more than 15 books about this 20th-century giant of Catholic thought. He is the creator and host of The Apostle of Common Sense, an EWTN television series on Chesterton’s works, and co-founder of Chesterton Academy in Minneapolis. He is also a frequent writer and media commentator on Chestertonian subjects.

Mr. Ahlquist’s newest book, The Way of Wonder: Classic Wisdom from G. K. Chesterton, was published April 1 by Pauline Media. On March 7, I interviewed him by email about it.

Chesterton produced a sizeable output in his lifetime, writing everything from plays and poetry to books on economics and history. Other than the BBC’s slick new “Father Brown” television series, based loosely on his priest-detective fiction, why should Catholics care about Chesterton today?

I'm glad you said “based loosely” on Father Brown. The BBC series, I would say, is based on a character with the same name as Father Brown. But the fact that they went to this character shows a respect for Chesterton among the detective fiction community. And in this case, Catholics should be happy that a priest is at least being portrayed in a very positive, even heroic light. On a larger scale, Catholics should rejoice that Chesterton is being rediscovered. He is a timeless writer, in many ways more relevant today than when he first wrote a century ago. He has a lot to teach us.

You’ve already edited many editions of Chesterton’s works, contributed to various works on him and written several books on him. What inspired this one?

To be frank, I was approached by a Pauline sister who also happens to be a member of the American Chesterton Society. She told me about the “classic wisdom” series from Pauline media and said a book on Chesterton was required! When a nun tells you to do something, it's best to do it.

Everybody. This is an entirely accessible book.

What is “the way of wonder” referenced in your title?

Christ said that unless we become like little children we cannot enter the Kingdom of Heaven. One of the most childlike qualities is wonder. Chesterton re-introduces astonishment at creation, at the gift of life. “The best kind of giving,” he says, “is thanksgiving.”

What sort of “classic wisdom” will readers find in this book?

Chesterton is a “classic” by virtue of having stood the test of time, by being read across several generations. But “classic” also means being fresh even when its old, by always being true. Chesterton points to the truth through every available means. He tries to get us to see things for the first time, even though we may think we are already familiar with them.

For an extremely large man, Chesterton displayed a remarkably light touch in his writings, and some admirers have accordingly dubbed him “the prince of paradox.” What is paradox and why is it important for reading Chesterton?

Chesterton makes great use of paradox, the surprising truth, the unexpected truth, the truth that even has a contradictory element in it, because that is the nature of truth itself. It is paradoxical that God should come to us a baby, born of a virgin, that God should suffer and die, that he should rise from the dead, that he should build his church on such a fumbling and comical character as Peter. Chesterton makes us see how strange the truth really is, which means occasionally giving us a jolt. It is one reason why he is so delightful.

Like Chesterton, you are a convert to Catholicism. What inspired your interest in him?

As an Evangelical, I was a big fan of C. S. Lewis. Lewis led me to read Chesterton. And after I started reading Chesterton, I left Lewis behind.

What is the goal of your work on Chesterton?

When I started the American Chesterton Society, the goal was simply to get as many people as possible to read Chesterton and become friends with him. That hasn't changed much in the last 20 years.

How has Chesterton influenced your faith and writing?

What’s your favorite work by Chesterton and why?

What an awful question! Even though I consider Orthodoxy essential and his book on Charles Dickens exquisite, I love his essays best, I think. I start each day with a Chesterton essay. There are over five thousand of them. Whatever he happens to talking about that day is something that I happen to need.

Today we’re increasingly aware of injustices in our global economic system. Noting these same problems in the early 20th century, Chesterton and Hilaire Belloc (known collectively as “Chesterbelloc”) argued that capitalism and socialism are two sides of the same coin, insofar as they both concentrate ownership of the means of production in the hands of a few (i.e., corporations vs. governments) at the expense of the many.

As an alternative to these doomed systems, they advocated distributism, a dispersal of ownership after the fashion of the medieval European guild system. What do you think about the feasibility of their suggestions for our world today?

I suppose the best response is that capitalism and socialism have not turned out to be feasible either. The present state of the world is a monument to the failures of capitalism and socialism. Chesterton and Belloc's ideas are based on the Catholic social teaching of Pope Leo XIII. This teaching would be feasible if all or even most Catholics embraced it. We could change the world. It is the idea that an economy should be based more on the family's interest rather than the individual's or the state's interests.

If more people were self-sufficient and independent, we would have a more stable economy. Widespread wage slavery makes people dependent and also passive. It leads to an entitlement mentality and the inability for us to do things for ourselves and take control of our lives. The good news for distributism is that more and more people are dissatisfied with things as they are: That is why there is a renewed interest in Chesterton's ideas about this.

If you could say one thing to Pope Francis about G. K. Chesterton, what would it be?

Chesterton tried to bring sanity to an insane world. Using him as an inspiration, I have tried to do the same thing. I hope when my days are done, I will have succeeded somewhat. The revival of common sense.

Almost a worse question than what is my favorite Chesterton book! But I have a particular affection for Jeremiah 6:16: “Stand by the roads and look, and ask for the ancient path, and walk in it, and you will find rest for your souls.”

It is the corollary of Chesterton's line, “A dead thing goes with the stream. Only a living thing can go against it.” The old way, revealed to us long ago, is still the good way, the thing we have to recover. It is the opposite of the way of the world. And it is the only thing that will bring peace.

For some reason a Chesterton quote comes to mind: “The one glorious thing on God's green earth is to fight a losing battle…and not lose it!”