What does Georgetown University owe to the descendants of Jesuit-owned slaves? 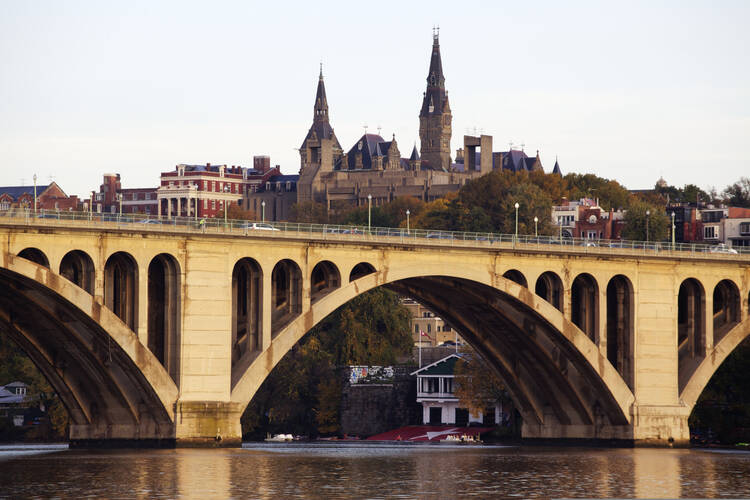 What do institutions that benefited from the sale and exploitation black bodies owe the descendants of slaves? How should individuals tainted by their complicity in the United States' "peculiar institution" be remembered or memorialized?

These are questions all Americans must grapple with; but today at Georgetown University they are no longer simply being considered in the abstract.

The Georgetown Memory Project is an independent nonprofit organization founded by friends and alumni of the university to confront a dark chapter of the Jesuit institution's history: In 1838, Georgetown sold 272 slaves from Jesuit plantations in Maryland—men, women and children—to plantations in Louisiana, often breaking up families in the process.

The stated mission of the G.M.P. is fourfold:

In April, The New York Times reported on the project and asked readers to make contact if they thought their ancestors were among the 272 slaves. Scores responded. Today in The Times, we read the stories of four of these descendants.

Charles Hill, 74, says his father told him that their family came from Maryland, but never mentioned the Jesuits. “He didn’t want to disturb our Catholic faith. He didn’t want to lose us.” And he didn't. Today, Mr. Hill is still a Catholic, “Knights of Columbus, fourth degree,” he says.

Sandra Green Thomas, 54, says she is still processing the new information. Her great great-grandmother, Betsy Ware Harris, was likely pregnant or a new mother when she was sold. “When I realized that, my heart just broke for her.”

Orlando Ward, 55, wants to look forward: “Let’s jump ahead and talk about reparations. How do you really value the damage that was done in a way that’s straightforward and fair?” Scholarships for descendants are part of the answer but so too is a reckoning for those responsible for the sale. “I think it’s important for both sides to be pointed out and memorialized, not villainized,” says Mr. Ward, “to begin to build a model for healthy dialogue.”

Rochell Sanders Prater, 55, sees the hand of God in the revelations about her ancestry: “I trust that this is a divine intervention. It’s a gift from God that can help heal this nation.” Which is not to say the rest of us are off the hook. When it comes to bridging the racial divide, Ms. Prater says: “I don’t want to have a dialogue about it. I want us to do something.”

These are just four stories. There are thousands of descendants alive today. Their voices are indispensable if this country is to “do something” about slavery’s ugly legacy: persistent and rising segregation in our schools; the mass incarceration of African-Americans; an unemployment in the black community more than double that of whites.

Georgetown has already taken one concrete step: Buildings named for William McSherry and Thomas Mulledy, the Jesuits primarily responsible for the sale of the 272 slaves, have been temporarily renamed Freedom Hall and Remembrance Hall. It is a small but significant first step. And, as Margot Patterson writes in her latest column, “[by] contending with their slave-owning history” Georgetown and other universities “are blazing a trail for American society to follow.”

Check out America’s coverage of the Jesuits and slavery:

Acts of Penance, Margot Patterson
Bringing scrutiny to bear on the slave labor that sustained it, Georgetown has been claiming its own sinful history. A wealth of information in its archives has drawn wide attention, but it’s the willingness to acknowledge wrong and deeply engage with history in pursuit of truth and reconciliation that seems so promising.
Saved by Grace, Cora Marie Billings, R.S.M.
Often I am asked how I can remain a Roman Catholic when the church I now serve in had ownership of a member of my family. Although this part of our Catholic history might make some people turn away from the church, this knowledge makes me more determined to stay and to work for greater equality for people in the church and the world today.
Reconciliation at Georgetown, The Editors
Georgetown’s Working Group on Slavery, Memory and Reconciliation has plans for an ongoing set of events to help the community discuss how “to foster a creative response to this shameful part of our history.” As the broader conversation about race in U.S. society continues to unfold, this example reminds us that we ought to hope not just for the success of protests, or an end to them, but for energy for the ongoing work of reconciliation.