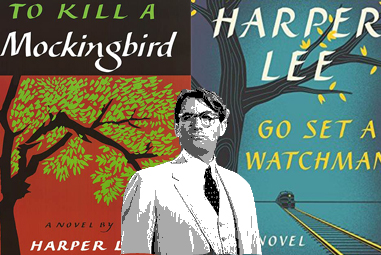 "Look, I’m very aware of the fact that no reviewer is going to be able to stop the Watchman juggernaut" Entertainment Weekly Senior Editor, Tina Jordan, opined last week. "I just want people to understand two things: First, this is all about the money. And second, reading Watchman will forever tarnish your memories of one of the most beloved books in American literature."

Jordan's review struck me because it perfectly encapsulates the very odd mixture of cynicism and naivete that has characterized so much of the coverage in general of Harper Lee's 'newly discovered' novel. Full disclosure here: I have not yet read Watchman, but I am one of the countless people—I think the technical term is "gazillions"—who have read and loved To Kill a Mockingbird and seen the film. Thus I am eminently qualified to make the following pronouncements. ;o)

In all seriousness, though, I'm less concerned about whether Watchman stands or falls on its own merits (by nearly all accounts, it falls); instead I'm fascinated by the strange sense I'm getting from the coverage that Mockingbird is somehow tainted by the publication of Watchman. Atticus, Scout et al are as beloved as any characters in American fiction over the past century, so there is an understandable sense of ownership that we all have. At the same time there seems to be an undercurrent to some of the criticism that suggests that we may have been duped, that somehow Harper Lee has committed a crime of the imagination in creating an alternate story in which Atticus is not the saintly crusader for racial equality in Mockingbird but instead an aging father who is troubled by the changes brought on by the civil rights movement.

Is this Harper Lee's The Education of Little Tree moment, in which we are scandalized to discover that the author of a beloved childhood story is not who we presumed?

Hardly. Yet, while it's touching that readers are so devoted to the characters set forth in Mockingbird, it's slightly disconcerting that anyone would allow their love of such a beautifully rendered story to be diminished by an author’s different imagining of it. Bob Dylan’s version of “Like a Rolling Stone” in waltz time—released decades after the original—is an interesting window into the alley ways he traveled before settling on the final record as we know it but it doesn’t alter the original’s epic greatness in the least.

Granted, given the new book's murky origins, Tina Jordan’s first caveat, “This is all about the money,” could be true. And it would be sad to think that the notoriously publicity-averse Lee, now 89 and reportedly less lucid, had been taken advantage of. The truth is we probably would’ve seen Go Set a Watchman at some point in the not-too-distant future anyway.

My only fear at this point is that with the upcoming release of JD Salinger's unpublished work, we don't discover a long-lost novel in which Holden Caulfield grows up to be "Mad Men's" Roger Sterling.

Show Comments (
4
)
Comments are automatically closed two weeks after an article's initial publication. See our comments policy for more.
Beth Cioffoletti
4 years 6 months ago
I am reading WATCHMAN now, almost finished. Though it is not as brilliantly written as MOCKINGBIRD, I think that it is an important book. Clearly the book needed some editing and rewriting, but what Harper Lee is saying (or trying to say) is important. It's not so much a defense of Southern culture as an attempt at a clear and honest looking at it. Who else is doing this now in a non-partisan way? Isn't it about time? I grew up in the South and I resonate with the conflicts of the Watchman book. The insights are helpful in understanding why and how the South is the way it is today. The power of WATCHMAN comes from Ms. Lee’s willingness to show how meaningless the veneer of respectability and education were, and are, in the white South. After reading Ta-nehisi Coates' recent BETWEEN THE WORLD & ME, which exposes the myth of white supremacy, these books which glorify Southern "heritage" without honesty and insight are embarrassing. WATCHMAN, though not a great literary work, at least tried to break this spell.
Bill McGarvey
4 years 6 months ago

Thanks Beth. That's an interesting insight into a Southern reality that people like me from the North wouldn't necessarily get.

Beth Cioffoletti
4 years 6 months ago
I'm not sure that the underlying deceit is exclusively a Southern reality, but it certainly has its own unique tone in the South.
Ric Rose
4 years 1 month ago
Go Set a Watchman - another take I just finished Harper Lee's novel, "Go Set a Watchman," the sequel to her instant literary classic, "To Kill a Mockingbird." Both books were written in the 1950s. The story follows Scout's return to her hometown in Alabama 20 years after her attorney father, Atticus Fitch, successfully defended an innocent black man accused of raping a white girl. Atticus, played by Gregory Peck in the movie, was her hero. The character has served as an inspiration to generations of Americans to pursue the law as a career, to serve justice, and to be a voice for those without one. The twist upon Scout's return, however, is the discovery that her father is not color blind and, moreover, that he is actively defending the community's status quo against racial policy changes being forced upon the South by the Federal Government. He abhors the Supreme Court's heavy handed 1954 decision, Brown vs, Board of Education, in which the Court declared, unanimously, that there is no such thing as separate but equal under the Constitution, and that integration of public schools must occur "with all deliberate speed." This landmark decision laid the precedent for the dismantling of segregation in America, at least theoretically. The re-emergence of the confederate flag in the South during the fifties and sixties, I think, symbolizes Atticus' and the South's resistance to this forced change and it's ongoing championing of state's rights. Much of the book evolves around the now 27 year old Jean Louise's attempt to reconcile the apparent contradiction in the character of her father. How could a man stand up against all odds and defend a black man against racism and then be a racist himself? Most of Atticus' argument in the book centers on protecting his and his fellow white man's livelihood, that is threatened by government force, in a region where blacks outnumber whites; that, and his perception that blacks in the 1950's were not ready yet to assume the responsibilities that full citizenship entails. This perceived contradiction in character reminds me of Thomas Jefferson, he who wrote "All men are created equal", and yet owned slaves as he wrote these very words. He who advocated for separation of church and state, yet had clergy on the federal payroll in an effort to christianize or civilize the Native Americans whose land he prized. Go figure. Perhaps, both Atticus Fitch's and Thomas Jefferson's contradictions can best be explained by that quintessential American quality known as pragmatism. We do what we think works, coherence of thought or not. Of course, here, it is all a matter of perspective, whose perspective. Jean Louise astutely points out that Atticus goes to his Methodist church every Sunday. Isn't he listening? He taught her to read the Bible. She knows the lawyer can read. What is up with that? His response, which she rejects, is that it is not that simple. Indeed not. My sympathies lie with Atticus's daughter, but I can understand the economic and political complexities that Atticus and Thomas Jefferson struggled with in the day to day reality that that these responsible men found themselves in. Were they just trying their best to strike a balance between the way things are and the way things should or could be? Having said that, at least for me, the central teachings of Jesus, which are at the root of Western Civilization's notions of human dignity, justice, equality and freedom, cannot be ignored or so easily dismissed, particularly if one considers themselves a Christian. Jesus, like Scout, returned to his home town in Nazareth where he had been brought up. At the local synagogue, he read from the prophet Isaiah the words central to his mission, words that also upset the status quo of the powers that be of his day, to the point of his own death and resurrection, "The spirit of the Lord is upon me, because he anointed me to preach the Good News to the poor. He has sent me to proclaim release to the captives, to bind up the brokenhearted, and recovery of sight to the blind, to set free those who are oppressed and to proclaim the year of the Lord's favor." Luke 4: 16-19. Scout grew up and Jean Louise lost her innocence, especially in regards to how deep seated prejudice is in the world. She learned nobody is perfect, including her father. That disillusionment was a hard pill to swallow. As a result, she was forced to find a new anchor. Her father could no longer serve as her watchman, and she had to learn one of life's toughest lessons: "every man's watchman is his conscience."
Advertisement