Cambridge, MA. Today is the birthday of Mohandas K. Gandhi. It is true that his particular programs and positions have faded with age — Indians do not live in the past, and have moved on, for better or worse; and it is true that now as in the past, there are thoughtful Indians, of Hindu and other communities, who dispute his politics, his compromises, and his personal eccentricities. All this is true. So why remember him on the day he would have turned 141? I suggest three reasons (which certainly do not form the exhaustive list.)

First, Gandhi is still, after all this time, a very interesting thinker who wrote very well (and not just voluminously). Everyone knows about him, but few read him. And if you read him, you will like him less, then you will like him more. Of course, his Autobiography remains a spiritual classic and vividly recounts key personal moments in which he worked out his basic principles of nonviolence and truth seeking (in nonviolence as satyagraha). But there is also his Satyagraha in South Africa, in which he recounts in more thorough detail his efforts to defend the Indian community in South African against biased and oppressive laws, and how his realization of nonviolence and self-purification — by suffering — became such a potent liberative force in India and throughout the world. His commentary on the Bhagavad Gita, while not a scholarly work, is a vivid and lively exposition of detached action, that spiritual indifference which, as in the spirituality of Ignatius Loyola, opens the way for free and liberative action in the world. And there is the less well known but still powerful 1910 treatise, Hind Swaraj, his “manifesto” setting forth the principles that he thought had to underlie a truthful and effective Indian independence movement; real history, he says there, is primarily as a story of nonviolent resistance living, but unfortunately the history books mistakenly count as history the wars of rulers, their weaponry and violence. If we change our perspective, we can see that nonviolence works most of the time for most people — and can change the world if we start thinking for ourselves, take our lives into our own hands, and resist the thoughtless flow of ordinary, somewhat violent life. 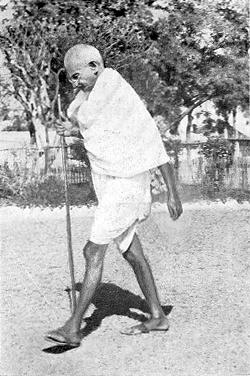 Second, core issues that occupied him so powerfully have not gone away. Examples abound, where Gandhi might well matter. Jonathan Chait of The New Republic just posted a provocative piece, “Why Don't Palestinians Adopt Nonviolence?” which, in light of today’s remembrance of Gandhi’s birthday, seems a useful prompt — despite skepticism — to ask again if Gandhi (not mentioned by Chait) was in fact offering, the better part of a century ago, a more practical path of nonviolence — one that fails today not because it is impractical in politics, but because communities have not found ways to inculcate among their members the necessary detachment and spiritual discipline. Or: just the other day, the Allahabad High Court issued its decision on the hotly contested issue of the Babri Masjid (mosque) in Ayodhya in north India — where, in 1992, by an act that led to terrible communal violence, a Hindu group tore down the mosque claimed to have been built on the site of an ancient temple marking the place of Lord Rama’s birth. The Court decided to divide the site in three ways, among Muslims and two Hindu communities. For the moment, as the decision is appealed, further unrest seems to have been avoided. But while this may be a wise and thoughtful solution to a very difficult situation, it seems to me that Gandhi would have imagined a different dynamic: not several communities contesting the site, so as to demand it for their own, but rather each community — Hindu or Muslim — insisting that the other take the entire site. Neither community needs the site, and both would be better off with a bit more detachment in the matter. Gandhi himself did not cling tightly to Hindu identity, even as he refused conversion to Christianity or other religions; rather, he sought a spiritual/moral ground that would make communication possible even as established communities protected their vested interests.

Or, closer to home: the push and pull over an Islamic Center in lower Manhattan is surely vexed and depressing enough that it at least calls for the consideration of a Gandhian solution — some public act of solidarity with Muslims by Christians and Jews in the area — perhaps for instance a Jewish-Christian declaration that unless the Center can be opened, the nearby churches and synagogues will close in solidarity until minds are changed. (Would Gandhi have suggested this? I invite expert Gandhians to add their views.)

Third, he is a saint, and we should honor the saints. Our Catholic observance of saints’ birth and death anniversaries need not be entirely limited to Catholic saints. Without undue harm to anyone's theological sensitivities, we might very well join other Christian communities in adding figures like Gandhi to our calendar, mentioning him at Mass, and praying in his memory for peace and nonviolence. We can do this because, from a moderative Catholic perspective, he is obviously a figure radiant with the grace of God, grace that loses nothing of its splendor because it radiates in the life, work, personality of this man who deeply respected Jesus yet chose not to become a Christian. Recall what Dorothy Day wrote in The Catholic Worker when Gandhi was assassinated by a Hindu extremist in January, 1948:

“'Greater love than this no man hath — that a man lay down his life for his friends.' There is no public figure who has more conformed his life to the life of Jesus Christ than Gandhi, there is no man who has carried about him more consistently the aura of divinized humanity, who has added his sacrifice to the sacrifice of Christ, whose life has had a more fitting end than that of Gandhi. 'A prophet is not without honor save in his own country ... he came into his own and his own did not receive him.'

“It was because he went the full way, because he adhered to an Absolute, because he insisted that there be no hatred, that Hindu and Moslem live together in peace — it was for these things he was murdered. It was because he believed in a Revolution that went beyond the social and ended in personal regeneration, because it was pacifist that he has now attained to that failure that leads to ultimate glory.

“Truly he is one of those who has added his own sufferings to those of Christ, whose sacrifice and martyrdom will forever be offered to the Eternal Father as compensating for those things lacking in the Passion of Christ. In him we have a new intercessor with Christ; a modern Francis, a pacifist martyr.”

Think too of these words when we mark Francis of Assisi’s feast Monday, October 4.

Francis X. Clooney, S.J.
Show Comments (
2
)
Comments are automatically closed two weeks after an article's initial publication. See our comments policy for more.
Beth Cioffoletti
12 years 3 months ago
Thanks for this, Fr. Clooney.  I have a little book, Gandhi's Nonviolence, that I've been reading for years.  His insights into Christianity surely puts him among the Christian saints.  There is still so much misunderstanding of "nonviolence", most people thinking that it is cowardice rather than courage, or thinking that it can be used for political purposes rather than being a deep personal and spiritual conversion.

I did not know about Hind Swarij, where he says that real history is primarily the story of nonviolent resistance living.  That reminds me of Howard Zinn's book, A People's History of the United States, where the story of American life is presented through the eyes of the common people rather than the rulers.  I've heard that the Bible is the story of the slaves -  like those who spent their whole lives building pyramids for the Pharoahs.

And I agree, a Gandhian solution to the ground zero Mosque would surely change the dynamic.

That President Obama said that he would like to know Gandhi better is a good sign, I think.
Molly Roach
12 years 3 months ago
I love Gandhi and have long been consoled by his commitment unto death for truth, for non-violence and for justice.  I'm definitely with Dorothy Day on this one-the person who lives what Gandhi lived will attract enemies as well as followers  and will be an obstacle to the enemies.  But I am grateful for his magnificent witness.
One of his sayings is a primary navigating device for me: Lies are the mother of violence.