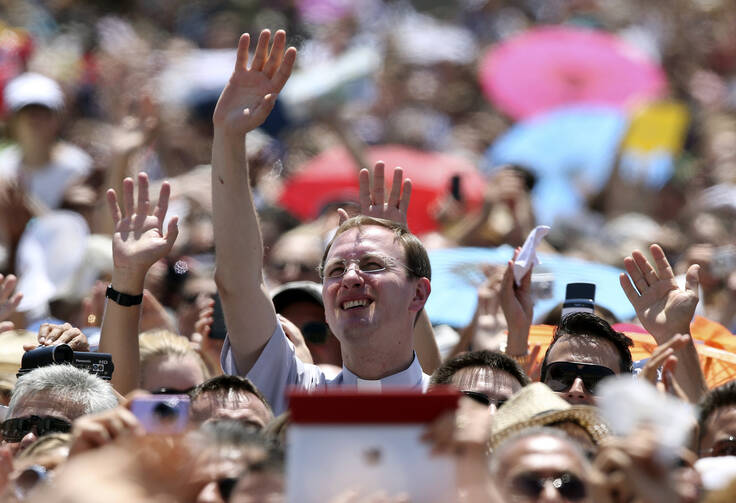 Philosophers keep exploring the empty space left by the eclipse of religion in the West, at least in the academic company they keep. In his Religon for Atheists (2012) Alain de Boton perceptively described the consolations of religion and going further he suggested how atheists might “despoil the Egyptians” by proposing alternative institutions to provide unbelievers the consolations of religion, like his School for Life.

InSecular Philosophy and the Religious Temperament (2012), Thomas Nagel tried to legitimate to other unbelieving philosophers the ineradicable desire for something more that is the religious impulse. While de Boton wants to preserve what appear to be the accidents of religion—music, art, collective experience, the outward sacramentals as Catholics might say—Nagel argues that only a cosmic faith that unites the believer with the whole cosmos can satisfy humanity’s religious yearning.

But just as philosophers are finding ways to fill up the emptiness within by embracing religion without God, sociologists are arguing that the conflicting currents of contemporary culture have left many people without the capacity for any faith at all, not even false ones.  In “The Gospel According to ‘Me’” in the New York Times Sunday Review (6/30/13) and The Stone, a Times philosophy blog, sociologists Simon Critchley and Jamieson Webster argue that a variety of cultural trends have hollowed out the souls of modern Americans so belief has been made impossible and cynicism is rampant. This state of soul they call, with a bow to Nietzsche, “passive nihilism.”

Authenticity is [“passive nihilism’s’] dominant contemporary expression. In a seemingly meaningless, inauthentic world awash in nonstop news reports of war, violence and inequality, we close our eyes and turn to ourselves as islands.... Authenticity, needing no reference to anything outside itself, is an evacuation of history. The power of now.

In a devolution from the Puritan ethic of capitalism, financial and business success have become, the authors claim, the sole remaining signs of authentic existence. In such a culture, failure, unemployment and lack of upward mobility deprive people of their cultural faith in material progress and lead them into a morass of alienation.

Because the cultural ethic has become so self-referential, it is anti-social. “At the heart of the ethic of authenticity,” the authors argue, “is a profound selfishness and callous disregard of others.” Whereas a worker alienation in the 19th and 20th centuries resulted in union and movement solidarity, 21st century alienation results in dispirited monads listening to their iPods and flicking through their iPhones.

“Is the prosperous self,” the authors ask, “the only God in which we believe in a radically inauthentic world?” Evidently they would prefer not. They would like, it seems, for charity and the family of Christian values to gain a renewed hold on American consciousness. They hope to shatter the incoherent “moral complacency” that rests like a carapace on American society, but with layered appeals to Moby Dick and "Hamlet" they can only hint obscurely at how that might happen..

De Boton and Nagel succeed better than Crichtley and Webster in showing a way forward for the literate elite and secular academics. What the sociologists do better is to describe what ails the American soul, and especially average American young people. Their diagnosis is one we Catholics need to take seriously as we address the New Evangelization.

Can We Evangelize Unbelieving Absurdists

Critchley and Webster put their finger on “the radical dissatisfaction” identified by Pope John Paul II at the heart of “superdevelopment.” But the disease they identify is far more complex than the sated soul who simply finds material satisfaction unsatisfying. They aptly name it “passive nihilism” for it compounds dissatisfaction by failing to recognize any possible standard for well-being other than material success and by cynical disillusionment with any other way of life; and that cynicism further corrodes the spirit because of the deepening frustration of expectation by the market system.

Unbelievers like de Boton and Nagel offer fertile ground for evangelization, it would seem, compared to those who have bought into the downward spiral of “The Gospel of Me,” and that would include, in addition to the young, many people of all ages who have fallen off the ladder of success. Twenty-five years ago when John Paul pointed to the radical dissatisfaction at the heart of capitalist culture, one could still appeal to “the surplus of desire” underlaying that dissatisfaction to build an apologetic and bring people to the door of faith. The deepened cynicism and nihilism at work in contemporary culture, if the sociologists are right, make that kind of appeal all the more difficult. It appears as a kind of bad faith. An absurdist views of life has become natural. Typical is the young athlete, in a promotional ad—is it for tennis?--telling the world that he is here on earth to have as much fun as he can before it all comes to an end when he dies. How do we evangelize such people?

It may be that the only way to break through the hide of self-protection that is their cynicism is to help them confront the radicalness of the gospel radically lived. Only the joy of Christians, their simplicity, love and service of the poor lived openly, as Pope Francis has tried to do, can shatter such an absurdist view of life. While we, the church, must not become a sect, we must offer vivid alternatives to the strangled life offered by the spiritual decay of high material civilization.

Pope Francis has done that, and he draws the largest crowds yet seen at St. Peter’s Square, so large, I am told, that Roman authorities have been forced to close off the circulation of auto traffic around the square. Similar witness needs to be given in New York and Los Angeles, Chicago and Boston, Phoenix and Miami. The New Evangelization will come in living the gospel life, just as it did eight centuries ago with Saint Francis and his little brothers. For this to happen, there has to be a widescale renewal in lifestyle and commitments across the church, in the clergy, among religious, in lay movements. Only the embodied gospel will rescue today’s lost souls.

Drew Christiansen, S. J., a former America editor in chief, is a visiting scholar this year at Boston College.

Drew Christiansen
Show Comments (
2
)
Comments are automatically closed two weeks after an article's initial publication. See our comments policy for more.
Thomas Farrell
9 years 7 months ago
Like a skilled juggler, Fr. Drew Christiansen, S.J., throws out a few different references and then proceeds to juggle them around a bit. As he notes, Simon Critchley and Jamieson Webster advert explicitly to Nietzsche when they offer their characterization about passive nihilism. However, Critchley and Webster do not happen to advert explicitly to William James's book THE VARIETIES OF RELIGIOUS EXPERIENCE. But they have it in mind. In effect, they describe contemporary authenticity as emerging out of the historical matrix of religious experience that James discusses.
ed gleason
9 years 7 months ago
'Only the embodied gospel will rescue today’s lost souls' Your Synodality post lets us recall that a way forward in evangelization might be what a synod not Rome gave us...the .preferential option for the poor. This Gospel action, promulgated and accepted as a Christian lifestyle could be widely accepted. It also has wide youth appeal built in.