Francis: Synod Fathers Must 'Listen'; Do 'Whatever' Jesus Tells Them 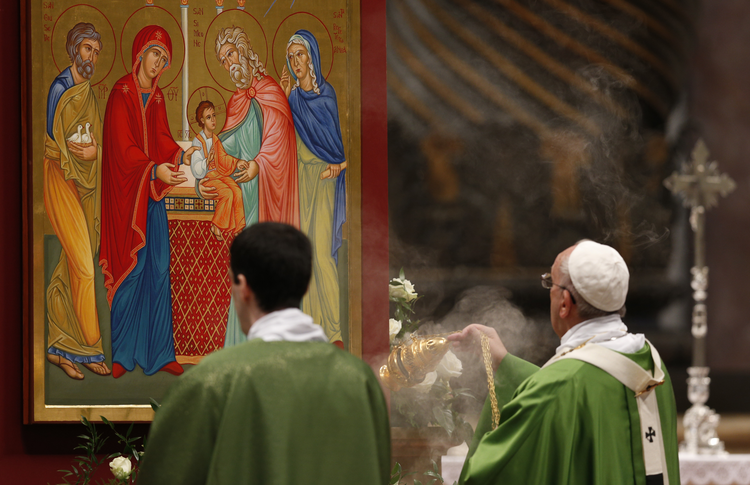 Speaking at a candlelight prayer vigil in St Peter’s Square on the eve of the opening of the synod of bishops on the family, Pope Francis made clear that he wants ‘the synod fathers’ to listen attentively to God and to the cry of the people, and to keep their sights fixed firmly on Jesus and do “whatever” he tells them.

He described the coming together of the 191 synod fathers with the Bishop of Rome as “an event of grace, in which episcopal collegiality is manifested in a journey of spiritual and pastoral discernment.”

He urged the synod fathers who were present at the vigil and the 80,000 faithful who had gathered in the square to pray with him for the successful outcome of this extraordinary assembly which, many analysts think, could prove to be a watershed in his pontificate and indeed in the life of the Catholic Church.

Pope Francis told the synod fathers that they have come together for two weeks (October 5-19) “to find out what the Lord wants of his Church today”.  To discover this, he said, they “must listen to the heartbeat of this time (in history) and sense ‘the smell’ of the people today, so as to be impregnated by their joys and hopes, their sadness and anxieties”.  He assured them that if they do this then “we will be able to propose the good news about the family with credibility.”

He asked the Holy Spirit to give them three things.  First of all “the gift of listening: to listen to God so as hear with him the cry of the people; and to listen to the people, to the point of inhaling the will to which God is calling us”.

In addition to this, he prayed that the synod fathers “be willing to have a sincere, open and fraternal confrontation that will lead us to take pastoral responsibility for the questions that this change of epoch brings with it.”

His third request is that the synod fathers “fix their gaze on Jesus Christ”, because if they assume his way of thinking, living and relating then they will not have to struggle to translate the synod’s work into pastoral directions and guidelines, but will “do whatever he tells them”.

With those three attitudes, he said, their discussion on the family at the synod will become “a providential occasion” for “the renewal of the Church and society”.

Pope Francis concluded by praying that “the wind of Pentecost” may blow on the work of the synod, on the Church and on humanity and “undo the knots that prevent people from encountering each other, heal the wounds that are bleeding, rekindle hope, because so many are without hope” and “grant us creative charity so that we may love as Jesus loves”.

With his homily this evening at the prayer vigil, and his homilies at morning mass in recent weeks, Pope Francis has been sending signals to the synod fathers about the open and merciful attitude they should adopt in facing the big questions of the day.

Cardinal Lorenzo Baldisseri, Secretary General of the synod,  speaking to the press on October 3 recalled that Pope Francis has convened this synod “because the family today is different to what it was 33 years ago when John Paul II published his apostolic exhortation ‘On the role of the Christian family in the modern world’ (‘Familiaris Consortio’).”

Furthermore, he said, “the Christian religion is a history, not an ideology. We can speak about the family from the doctrinal point of view or from the pastoral perspective.  And there is theological development, all theologians say this.  All is not static, we walk in history. There is a door that has been closed up to now, but Pope Francis wants to open it.”

Gerard O’Connell
@gerryorome
Show Comments (
4
)
Comments are automatically closed two weeks after an article's initial publication. See our comments policy for more.
Bruce Snowden
6 years 10 months ago
Holy Father Francis tells the Fathers at the Synod on Family, to "do whatever Jesus tell them." I don't understand that. At the Synod will Jesus tell one Father one thing, to another Father something other, to another Father something different, on an on, each getting a different message, which would cause confusion, or will Jesus' message be the same to all? I suspect it will be a single message from Jesus, but will all the Fathers be attuned to the Holy Spirit, or attuned instead to their own personal "spirit?" Relative to their souls all the Fathers should do what Judge Judy likes to say to people on trial in her Court, "Put on your listening ears!" Let's pray that the Fathers attentive to the voice of the Holy Spirit and not to the voice of their own agendas, will hear a single message - the one heard, understood and accepted by Pope Francis!
Michael Barberi
6 years 10 months ago
Bruce, I think you have to read between the lines. Pope Francis wants all bishops to approach this Synod and the issues of the family with an open mind, not a mind strangled by a rigid ideology or exaggerated fears of change, but to the mercy and grace of God manifest in the workings of the Holy Spirit. The Synod fathers will need to look to the creative good, to the cries of God's people many who suffer from disenfranchisement, disrespect, lack of compassion, profound burdens, anxiety and moral dilemma. Let's pray for Pope Francis and the Synod fathers so that they will be able to move the RCC down the path of righteousness, inclusiveness, love and charity to the glory of God.
Bruce Snowden
6 years 10 months ago
Mike, thanks for your insightful comment. It does take a lot of wriggling to read between the lines. Not easy to do, but I will do my best.
Beth Cioffoletti
6 years 10 months ago
Yes, we believe in the sacredness and sacramentality of marriage. That our vows are made in heaven and that our love will last forever. The very idea captivates us and we are sure that we will make whatever sacrifices it takes to make it “work”. The problem is that we are human. Less than perfect. Some of us are damaged from way back. Things start not working out. We hurt each other, deeply. Things fall apart. Sometimes it is beyond our control: addictions, depressions. No matter how many “sorries” we say, we cannot put things back together again. So here we are, 25 years old and already failures. There might be a child or two. Despite our hard won insights into ourselves, we are not allowed to try again. We cannot eat at the family table anymore, so that the idea of a get-it-right-the-first-time sacramental marriage can be preserved. No 2nd chances in this Church. What would Jesus say to us?