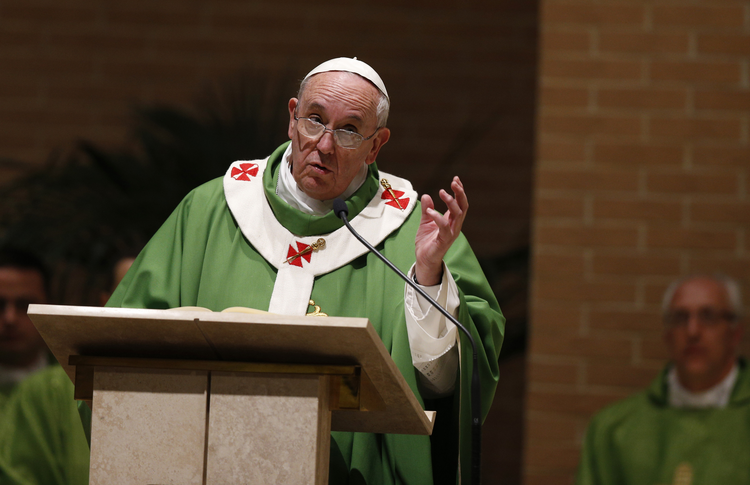 This is the second installment in a series of posts on Pope Francis as we look forward to the first anniversary of his election on March 13. The first entry "Francis: Far More than Show," looks at how Francis is dramatically reshaping the papacy through his 1) his choice of advisers and 2) institutional reform and renewal.  In this post I will look at 3) Francis' decisiveness in governing and the priority given to the Gospel over culture wars.

It must be disarming to meet Pope Francis in the confessional, as his insights into the sins and foibles of the people of our times are so penetrating. He cuts right to the quick without evasion, and he names often subtle ways in which we abuse the grace God gives us. The section of the apostolic exhortation “Evangelii Gaudium” on temptations of pastoral workers (Nos. 76-109) unflinchingly identifies numerous defects of the church’s ministers. As an examination of conscience, there’s been nothing like it since C.S. Lewis’s Screwtape Letters.

If true reform must grow out of conversion, then Pope Francis truly has the gift of discernment to set the church on the path of conversion. He identifies the most subtle ways in which pastoral ministers undermine their own effectiveness and the church’s mission. The list is long and in this Lenten season deserving of reflection by all Catholics. But the paragraphs on “spiritual worldliness” are particularly worthy of attention.

By spiritual worldliness Francis means outward piety concealing worldly ambitions and dispositions. Here are some of its manifestations:

This is a fearsome bill of indictment for church people; and it is immediately recognizable as the symptomology of the ailing church we have endured these past decades.

It describes the church of the culture wars and of a corrupting clericalism: classifying others, preoccupied with outward conformity, doing business in the place of ministry, discrediting questioners, being at ease with enmity to the point of persecution and even witch hunts, discouraging lay participation (and reciprocally, one might add, fostering a new clericalism).

Pope Francis won’t put an end to the culture wars. Perhaps the most he can do is put a lid on them. For there will always be those who prefer controversy to leading a life in truth. Driven by their own anxieties, these warriors are ever eager to impose their truth on others. A few U.S. bishops have already spoken out in defense of their option for moral crusades over the evangelization that the Synod and pope have called for. Nonetheless, Pope Francis has begun a process of purification. The rest of us can advance it with careful self-examination, with mutual accountability and with steady trust in the Holy Spirit.

Only the rare saint will escape falling to the temptations Pope Francis lays bare. The church’s renewal, however, depends on confessing our faults, trusting in God’s forgiveness, and getting up to proclaim the Gospel again. Despite his keen eye for our subtle sins, Francis ceaselessly communicates confidence that the grace is there to get up again, to proclaim the Gospel and do great things for Christ.

Next time, spiritual resilience and trust in the Spirit.

Drew Christiansen
Show Comments (
1
)
Comments are automatically closed two weeks after an article's initial publication. See our comments policy for more.
Bill Mazzella
7 years 4 months ago
During and after Vatican II, many Catholics took interest in the church. There were discussion groups, bible groups, liturgical groups galore. But the clerics could not handle it. Eventually people got discouraged as "Father knows bests" took hold again while the parishes went lukewarm again Francis wants to restore this life in the church. Will he end clericalism. That will be a big question.