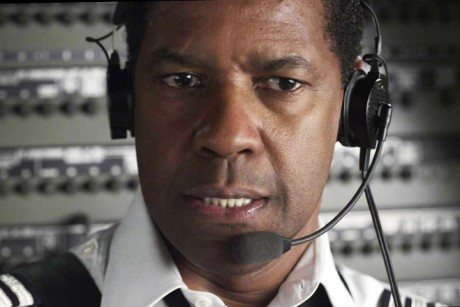 Before seeing the movie "Flight," the last time I saw Fordham grad and benefactor Denzel Washington was in the movie "Elie." He had just relinquished his license to kill and, at death’s door, had a religious experience worthy of any of the saints. So it was jarring to see him at the beginning of Flight—decadent and despondent—as he fueled himself with alcohol and cocaine prior to and during the airplane's ascent.

Before the film's signature scene of the inverted plane, the corruption of Washington’s character is vivid. This is an R-movie, one to keep away from the teens when it comes out on DVD. Many may first wonder, as I did, if this was a movie that hinged on the seediness of characters in various states of undress or raw sexual hunger. But these are a means to a greater good.

A movie for Christmas? As the advent readings at Mass and in the Liturgy of the Hours proclaim, the world is in sin and is in need of redemption. Likewise for Denzel Washington in this movie—he will be transformed and redeemed by the intervention of a higher power. This is definitely a movie with a Christian message.

For several years I worked in an alcohol and drug treatment unit at a hospital. Washington’s character brought me back to the life stories of many people in that unit who had finally hit bottom before their transformation and metanoia through involvement with Alcoholics Anonymous. Perhaps the plane racing toward the ground at nearly vertical angle is a metaphor for Washington’s descent into debilitating chemical dependency and despair.

The movie makers have brilliantly placed hints of this higher power in scenes of Washington's disintegration. In one scene, as he sneaks into a stairwell to have a cigarette, there is a background logo reminding us that this is “Saint Francis Hospital.” Or later, when the camera zeroes in on the battered and wounded co-pilot, a large crucifix is a focal point on the wall.

After the adrenaline-boosting scene of the upside down plane, the movie slows down. Some will say that this detracts from the film. Others will realize that “things take time.” There is no cheap grace here.

No spoilers here—but the end of the movie introduces us to a serene and redeemed Denzel Washington. He has found peace on earth, and his journey and transformation reminds us of the true meaning of Christmas. As Martin Luther King would say, he is “free at last.”

Screenwriter John Gatins has provided Washington with the tools to show his range of acting ability. In the tradition of Mark Twain, the words spoken by the characters bring out different dialects, giving the film a ring of authenticity that most movies lack. The clipped words of pilot and co-pilot are chillingly accurate. We hear the excuses, glossing over problems, and outright denial in the speech of alcoholics. Much of the movie takes place in Atlanta (where I once spent a great deal of time), and even the small but important details of Southern speech (such as children calling their elders “Mr.” or “Miss” along with the adult’s first name) are accurate. If there are to be Academy Awards given to this movie, John Gatins is eminently deserving for Best Screenwriter.

After I left the movie I wandered through the mall, at one point becoming aware of "Silent Night" being sung; that phrase of great hopefulness, “with the dawn of redeeming grace,” echoed through the shopping aisles. Denzel Williams has been transformed by grace, and we are reminded of the words of Therese of Lisieux: “Grace is everywhere.”

What better thought to meditate on as December 25th approaches?