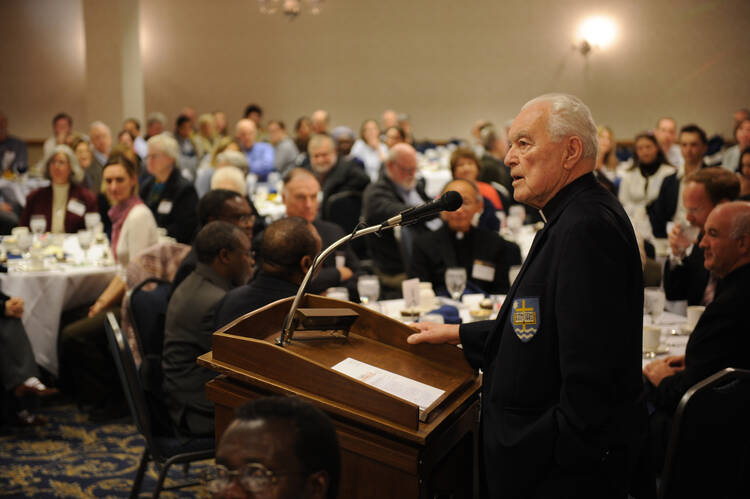 “Drew, wait up, how are you?” The voice shouted to me as I was leaving a burial at Notre Dame’s Holy Cross cemetery. The burial was for Fr. Bill Lewers, C.S.C., a former provincial of the Congregation of Holy Cross and my predecessor once-removed as director of the bishops’ conference’s Office of International Justice and Peace. I turned around to see who was hailing me. It was Notre Dame’s emeritus president, Fr. Ted Hesburgh.

I couldn’t have been more surprised to see it was Ted. The cemetery was crowded with dozens, if not hundreds, of people he knew far better than me. But he had sighted me, called me to hold up. My astonishment was all the greater because between us there lay maybe 50 feet and Ted, it was said, was already blind. Right away he asked, “How are things in Washington?” “Gee,” I thought, “after several years, he has still kept track of me.”

That was Father Hesburgh. He had not just a personal touch. He was personally interested in people. Faculty members told me that the most memorable thing about him was his interest in them, their spouses and family. He wasn’t a remote president under the Golden Dome or, in his case, the top floor of the library, the tall building with the mural of “Touchdown Jesus” facing the stadium. Fr. Ted kept track of their health, their passage, their sorrows and their awards.

Fr. Ted’s concern for faculty and staff was enacted frequently giving the lie to the student legend of the jet-setting priest. On the front lawn of the library was another statue of Jesus pointing heavenward. The campus joke was that Jesus was pointing to Hesburgh in flight. “There goes Fr. Ted,” the joke ran.

There is no doubt that Father Hesburgh liked to fly. At the end of his service on the U.S. Civil Rights Commission, President Jimmy Carter asked whether there was something he hadn’t done in his service to the U.S. government that he would still want to do. Hesburgh gave it only a moment’s thought. “I would like to ride in the SR71,” he replied. And he was fitted in space suit and was flown back and forth across country at the spy plane’s record-fast speeds.

Two things brought me together with Fr. Hesburgh. The first was the Kroc Institute for International Peace Studies and the second was the Jesuit presence at Notre Dame.

The Peace Institute was a favored child of Hesburgh’s last years as president. He brought me back from Berkeley, where I had returned after a year as a visitor at ND, to serve with the late, former Ohio governor, Jack Gilligan and Professors Bob Johansen and George Lopez to form the first staff fellows of the Institute. We joined Notre Dame veterans like John Howard Yoder, Peter Walsh and Kathleen Weigert, who had helped Hesburgh hatch the idea for the institute.

In those days, its signature program was the Hesburgh Fellows. The Hesburgh program accepted graduate (MA-level) students from around the world, who had hopes of working in peace-related fields when they returned home. The program had Hesburgh’s distinctive blend of the personal and the global. The fellows shared a house on campus together, where Ted was a regular guest, and their capstone project was to be a joint paper on their own vision of world order.

We Jesuits were also part of Hesburgh’s vision. For three years, though the youngest, I was the Jesuits’ religious superior there. With so many senior faculty and staff in their number, my role was very much akin to herding cats. As usual, Fr. Ted was solicitous to make us welcome, offering to build us our own residence at the university’s expense. He explained his reasoning in terms unlikely to be heard, for obvious reasons, from other Holy Cross priests, “To be a first class Catholic university, we need to have Jesuits here.”

A graduate of the Jesuit Gregorian University in Rome, Fr. Ted presided over university convocations in the Greg’s plain renaissance doctoral robes, a four-pointed biretta crowned with a red pompon atop his head. His attachment to the Society of Jesus was very real, and an affection he shared with confreres like the late John Gerber and David Burrell.

Ted was a great-souled man, a model priest president, and he well deserves his new place among the saints. I can see him now stretching out his hand to the crowd, hailing old friends, and, like Socrates, conversing with them on the eternal verities. R.I.P.

Drew Christiansen S.J. is a distinguished professor at Georgetown University and a former editor of America. He taught at the University of Notre Dame in the 1980s.