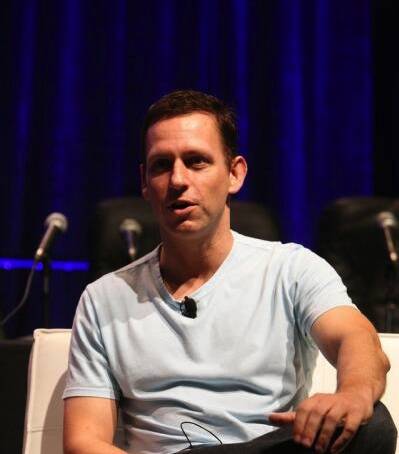 Peter Thiel, a member of the Forbes 400 list with a net worth estimated at $2.2 billion in 2014, is a venture capitalist and entrepreneur. Co-founder of PayPal and an early investor in Facebook, Mr. Thiel has been involved with some of the biggest companies in Silicon Valley during the past two decades. After selling PayPal to eBay in 2002, he founded Clarium Capital Management, a global macro hedge fund. He holds a BA in Philosophy from Stanford University and a JD from Stanford Law School.

Mr. Thiel is involved with a variety of philanthropic, academic and cultural projects. He is a primary supporter of the Committee to Protect Journalists, a group that promotes freedom of the press; of the Singularity Institute for Artificial Intelligence, which seeks to foster the responsible development of advanced computing technologies; and of the SENS Foundation, a medical charity dedicated to extending healthy human lifespans. He remains active at Stanford, where he has taught in the Law School, and serves on the Board of Overseers for the Hoover Institution there.

A self-described Christian and promoter of the Christian anthropology of Rene Girard, Mr. Thiel participated in a May 6 panel discussion on “the hope of humanity” with Anglican scripture scholar Bishop N.T. Wright and Catholic political columnist Ross Douthat, organized by the Christian non-profit Veritas Forum. His newest book, "Zero to One: Notes on Startup, or How to Build the Future," is now available. On July 14, I conducted this interview with Mr. Thiel by email.

In your recent discussion with Ross Douthat and N.T. Wright, you suggested that the hope of humanity is technological innovation. What role do you see for Christians in making this progress happen?

Christianity has always had a universal outlook, and technology is something that can benefit everybody. Of course, new technology doesn't reach everybody at the same time, but that's not a reason not to work on it, just as helping people face to face isn't pointless just because you do it person by person rather than all at once. I don’t think that the project of creating new technology entails a special role for Christians per se, but insofar as Christians don't just hope for a better world but also hear a call to be active partners in the fulfillment of that hope, I think building new and better tools is one way to do that. So maybe there's not a special role for Christians, but technology can be an appropriate specialty for Christians.

Christians have pioneered many technologies in the past, and for specifically Christian purposes: early modern churches developed telescopes and astronomy in order to better calculate the liturgical calendar, for example, and centuries before that Christians revolutionized communications by inventing the book (written texts had long existed, but while the pre-Christian classical world used scrolls to record them, Christians popularized the bound codex as a much more efficient way to transport and disseminate their ideas). I think the world is now so interconnected that probably no particular technology is likely to be invented by Christians alone, but I think Christians can and will both help to create new things and then also pioneer distinctively charitable ways to use them.

What positive ways, if any, might Christianity influence the future of technological innovation?

One can speculate that Christianity has already had a positive influence on the history of technology because it gave people a forward-looking view of the future, breaking us free from the ancients' conception of history as an endless cycle of good and bad fortune. Since this forward-looking story is far from over, that fundamental orientation toward a future in which our actions matter (rather than a chaotic world in which our actions are eroded away by meaningless chance) is one way in which Christianity can continue to have a deep and positive influence.

What can institutional Christianity do to better engage with technological innovation?

I don't know; I wouldn't say that the Vatican should be blogging more often, or that it needs to develop its own software to optimize the work of parish priests. That’s not because there aren’t likely to be a whole lot of ways in which computers can help churches to accomplish their work, but rather because technology is about much more than computers -- it's about any new and better way of doing things. The most important kind of engagement with technology is not the deployment of any particular technique, but rather a general openness to change. Churches have their own goals, and they should engage with technology the same way that anyone else would: they should be thinking about ways to do what they do better, rather than just doing it the way it was done yesterday.

You are sometimes described in media accounts as a futurist. What does that mean?

The word "futurist" probably sounds more exotic than it should. In the Victorian age, the whole world was full of futurists: since everyone could see the rapid changes taking place around them, everyone thought about how coming years would look very different from the present moment. Only now that change has slowed down and so many parts of our economy seem to be stuck does thinking about a better future come to seem unusual. Even so, I think you might say that everyone is a futurist at the individual level, if only unconsciously, since everyone doing meaningful work is working in order to bring about a future that would not happen if he just sat still. A big-scale social vision of a better future is important partly because it leads individuals to plan their own futures more ambitiously and more consciously than they otherwise would. The huge danger for a society that stops thinking about the future comes when people ratchet down their individual ambitions and thereby bring about the underwhelming results that they expected in the first place.

Any other thoughts about the intersection of faith and technological progress?

I think that faith and technological progress are related, or can be related, but they are not substitutes, and the temptation to see them as substitutes is harmful. This goes both ways: some people of faith find it sacrilegious to believe in technological progress, and some enthusiasts of technology see it as the answer to everything. But it doesn't have to be all or nothing. To say that we need to renew our faith in the technological future does not mean that all problems are technological; it means that we should work toward material improvement instead of giving up. For Christians it means understanding technology as an essential part of a more charitable and humane future, and not as a competitor or substitute for religion.