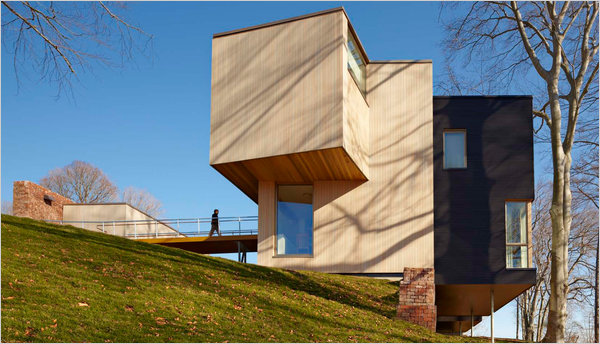 I'm completely and utterly biased (favorably, that is), about this article, since I'm a New England Jesuit and know well all the Jesuits quoted (and pictured) in reference to Fairfield University's beautiful new (and environmentally friendly) Jesuit residence.  The old residence was, however, near and dear to my heart: it was the place where I met my very first Jesuit.  Anyway, it's an amazing work of art and a real statement of a strong Jesuit "presence" on campus.  (But there's some of the old in the new: the white marble statue of St. Ignatius that stood in front of the old residence was recently placed a few feet from the doorway of the new one.)  Here's the New York Times's thoughtful piece on how a building can be a symbol as well as a residence.  Love the title, too: "Teach, Pray, Live."

Once there were nearly 100 Jesuits — members of an order founded by St. Ignatius Loyola in the 16th century — at Fairfield. Today, there are 22. Only six are professors; the others are administrators, or retired. That means some of the university’s 3,200 undergraduates will make it through four years without having a single Jesuit professor.

The graying of the Jesuit population is felt at each of the 28 Jesuit-run institutions of higher learning in the United States, from Georgetown University in Washington, founded in 1789, to Wheeling Jesuit University in West Virginia, established in 1954. Nationwide, the number of Jesuits has declined, to under 3,000 from about 10,000 in 1965. More than half are over age 60. That they aren’t being replaced by younger Jesuits is the result of social and economic circumstances, including increased opportunity for poor Catholics and the stringent requirements of the priesthood. (“In my experience, mandatory celibacy is far and away the biggest deal breaker,” says Father Scalese.)

But the declining numbers “don’t mean we’re all sulking off into the sunset,” says the Rev. Dr. Charles L. Currie, president of the Association of Jesuit Colleges and Universities.

Fairfield’s new Jesuit home, a 22,000-square-foot eco-friendly building, is part of an effort to reach out to students and non-Jesuit faculty. Unlike their previous house, in an isolated spot on the periphery of campus, the new structure commands a prominent hillside overlooking a main thoroughfare.

James Martin, S.J.
@jamesmartinsj
Show Comments (
5
)
Comments are automatically closed two weeks after an article's initial publication. See our comments policy for more.
Arnold Jessup
11 years 9 months ago
I would enjoy the experience of being in and around that structure.

They should commission the architects for a bridge like this:

http://grayorganschi.com/index.php/projects/details/footbridge#d22_2
11 years 9 months ago
Rather interesting structure.  Airy and sunny looking!  Great for living and praying, and teaching too for those outside looking in watching the sons of St Ignatius living and praying inside.   Take heart, Fr. Martin,  future sons are just being conceived now.  Before we know it they'll be taking your place!
Anne Chapman
11 years 9 months ago
Another opinion, perhaps a minority one - the purpose of the new building is laudable, the choice of location on campus is well-thought out, and the uses to which it will be put are also. It is designed for accessibility, especially for the aging Jesuits, who, hopefully will be able to age in place and alse be accessible to the youth on campus who value the wisdom of their elders who will have a better chance to get to know all the Jesuits at Fairfield.

But, for those who do not especially admire hard-edged, cold, uninviting modern architecture, it seems that this building's exterior (and some interior elements) misses the point.  The building is first and foremost to be a residence - a home.  It's exterior looks more like an industrial building in an office park than a home. It seems to be in a beautiful natural setting, and thus the exterior is even more jarring than if it was in an urban setting, surrounded by similarly cold, utilitarian industrial buildings.  There is nothing homelike or homey or inviting in this building - it is cold, hard, and most definitely not welcoming or ''cozy'' (for lack of a better word).  It does not invite one in to relax, perhaps in a book-lined library with old, polished hardwood floors, soft lighting, and comfortable furniture - a warm, comfortable place that encourages conversation, perhaps over coffee.  It seems little different from most modern university classroom buildings, including their ''lounges''.  There is such a thing as simple elegance, but this is simply cold and offputting, given its stated purpose. There is nothing inviting about hard, cold concrete floors, or flat, dark, harsh, and featureless facades.  The windows that permit a lot of natural light and frame beautiful views are good features, though, especially in a northern state with short winter days.  Natural light is always inviting. But couldn't they have introduced a bit of warmth to this building - both inside and outside?  It is not a place where I would choose to live out the rest of my life, nor even spend much time visiting.
david power
11 years 9 months ago
An ABBA tune popped into my head when I saw this.
Then I began a freudian quest to find out why.
The design says IKEA to me and IKEA is Swedish as are Abba.The idea of older jesuits I often associate with a love for the "new"  ideas of the 70's.
Also the grass and trees also remind me of a few Abba videos. Stylewise Abba are garish and even if some of the songs are good most people would have a beinign smile when thinking of the fashion. Then it reminded me of a prefab that I was taught in at school.Eventually some benefactor came in and in his speech at the opening of the new parts of the school he said "We could not expect people to think great thoughts in those prefabs".
That was locked away in my mind until I saw this foto.God only knows what else is locked away just awaiting bad architecture to be liberated ....
Gilbert Sunghera
11 years 9 months ago
If you are interested in seeing more images of this project you can go to this website: http://web.me.com/gsunghera/UDM_LSC_Service/Welcome.html, under examples of projects.  The aesthetics of this project is not what many would expect for a house of religious men, but it begs the question if you can find beauty in a pallet of rather simple materials.   I do apologize for the quality of some of the images, since they were taken just prior to the Jesuits moving in, so rooms are still bare.