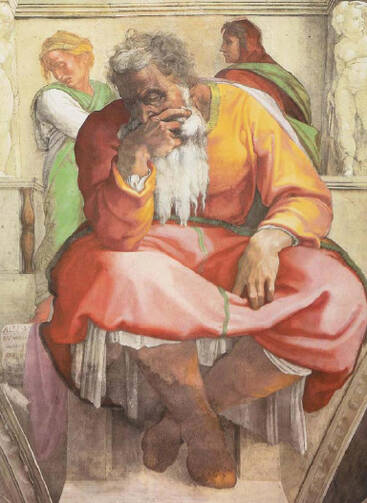 In an analysis for Religion News Service David Gibson reports that America’s Christian conservatives are pondering a ‘Babylonian exile.’ Gibson discusses three forms of exile: a return to a pre-Moral Majority separation of church and politics, a Benedictine model and the Jeremiah option.

I would like to propose a fourth. Though some may consider it a variation on the Jeremiah model, I believe it opens the possibilities for still greater religious transformation, just as the Babylonian exile opened the way to post-exilic Judaism.

A retreat from politics of the same sort as the post-Scopes Trial, post-Prohibition withdrawal of Evangelicals from American political life would mean disinvesting in the pursuit of political power and particularly an alliance with the Republican Party. The motto here would be “Do not put your trust in princes.”

The Benedictine model, proposed by philosopher Alasdair MacIntyre, envisages the perpetuation of Christian civilization “in small, intentional communities of faith removed from the surrounding culture.”

I sometimes think of it as the Liebowitz model based on the post-apocalyptic fable Canticle for Liebowitz, which envisaged similar literary-philosophical communities as the seeds of a renewed Western civilization. The Benedictine model, however, weds faith and learning, a key dynamic in the conservative drive for religious purity.

The Jeremiah model envisages, according to Samuel Goldman, writing in The American Conservative, “engagement without assimilation.” It encourages the exiles to “‘live in partnership with Babylon,’” reports Gibson, “while maintaining their Jewishness and seeking holiness.” Goldman gets much right with his interpretation, and conservatives would do well to heed him.

I take my own model, the conversion model, from my late colleague and friend Bill Spohn, a former Jesuit, who taught with me at the Jesuit School of Theology at Berkeley. At the time of the 1983 debate over the bishops’ peace pastoral, Bill argued that the exile provided a key theological event for reflection on nuclear disarmament.

In exile, he argued, Israel was asked to relate to God without the Land of Promise. He asked, could the U.S. live—in God’s sight—without nuclear weapons? According to this model, the key question for American religious conservatives is, can they live for God without political power? Can they participate in the city without compromising their holiness?

Some contemporary Mennonites approach their participation in civil society this way. Drawing from Jeremiah 29:7, they call it ‘the peace of the city.” As Goldman explains of the ancient Jews, this model involves sharing in the life of the surrounding political community without losing communal identity, all the while pursuing holiness in the midst of the surrounding society.

There are, however, more profound lessons from Exilic Judaism, Bill Spohn would say, for conservatives seeking flight from contemporary American society to learn. Post-exilic Judaism was transformed by the time in exile. The Temple was eventually restored, but an alternative route to holiness was found in close observance of the Torah in the Pharasaic movement of Jesus’ day and in anticipation of Rabbinic Judaism.

Secondly, the pre-exilic ethno-centrism was replaced with a universalistic theology of redemption. Jerusalem and Mt. Zion were envisaged as places where God would bring all the people of the earth to final fulfillment. The prophets re-imagined the promise as one for all peoples.

Can today’s American religious conservatives contemplate God using exile to change them, to re-shape their religious life, and reform their feelings for other peoples? Any real exile will certainly change the exiles, and an exile undertaken in conversation with God will inevitably lead to conversion.

If Bill Spohn were alive today, he would ask, “If Israel was asked to surrender Temple worship and the singularity of the promise, can today’s American Christians surrender the idol of political dominance and the fear of contamination from others?”

The persistence of the nuclear idol at the center of U.S. superpower status suggests conversion from our American idols comes hard, if at all.