An Encyclical Alone Won’t Save the Planet 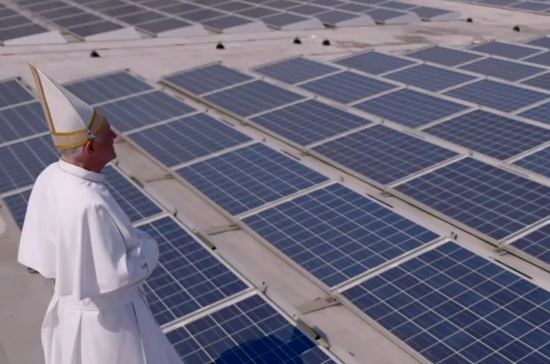 As the world holds its breath for the papal encyclical on the environment—and those at other publications pour over the leaked draft—I wonder whether some of those anticipating it most are in for disappointment. Perhaps they’re expecting the pope to mention their particular pet ideology or policy proposal. Perhaps they hope it will denouce the big, bad oil executives outside of whose offices they’ve protested. It probably won’t do either. It also won’t single-handedly turn the tide of our losing battle against our own appetite for carbon.

If this encyclical is successful, it will be because it inspires creative, diverse responses to the challenges it poses, rather than merely solidifying the existing political battle-lines. I’m less interested in the encyclical itself, really, than in what we the church—together with all people of good will—can do with it.

We need all the ideas we can get.

The Maryknoll Office for Global Concerns, an arm of the Maryknoll mission organizations, has for the past year been publishing a series of of primers called Encounters: A Newsletter on Faith, Economy, and Society. They’re an excellent collection of prospects for a healthier economy and a healthier planet, presented in light of Catholic social teaching.

These are slow, long-term proposals, and they’re no substitute for the strong international agreements that we so urgently need this December in Paris. But they help to remind us that real stewardship is not the result of a stopgap, or one faction winning out over another, or the arrival of a papal superhero. It begins with how we treat each other, and what we choose to value.

Nathan Schneider
@ntnsndr
Show Comments (
5
)
Comments are automatically closed two weeks after an article's initial publication. See our comments policy for more.
John Walton
6 years 1 month ago
"Let information be free" -- is Mr. Schneider a Libertarian? Intellectual property is property. The lack of rigorous intellectual property protection law in pharma does more to restrain India's growth in the high end pharmaceutical industry than any other factor. On the other hand, India does quite well in information tech where IP rights are safeguarded.
Nathan Schneider
6 years 1 month ago

Good point of clarification. If you look at the discussion of this topic in the Maryknoll documents, they're not proposing the elimination of intellectual property protection; rather, they're talking about efforts like Ecuador's FLOK Society project (which I attended last year) that aim to bring more diverse open licenses, into a wider range of fields. If you look at Creative Commons licenses, for instance, they allow more openness of information while retaining an appropriate legal framework for doing so.

The goal is not to encourage piracy, but we do need appropriate intellectual property regimes. At the moment, fair use and the public domain are being radically eroded by rent-seeking corporations, which often rely on publicly funded research for their patents. We can do better.

Regarding the photograph accompanying the blog post: though I have not seen this video (or heard of it), I can only say that this is no actor "playing" Pope Francis here. It seems to me that somehow somebody "photoshopped" a photograph of John Paul II alongside the solar panels and took a rather bland-looking mitre and put it on his head, and placed it at a rakish angle, to boot. The way the mitre is placed, it gives off an overall clownish effect (it looks like a dunce cap!), which I guess was the intention of the "satire."  If I am mistaken, the physical stance of the "pope" as seen here is eerily reminiscent of John Paul II.

To see the video, just click either the first or last link in the article. Enjoy!

I just saw the video. This "ninja-pope" can pack a lot of action in less than two minutes! So, I'll revise my opinion of who this actor-cum-pope reminds me of: he looks like E. G. Marshall! At least, a little bit...