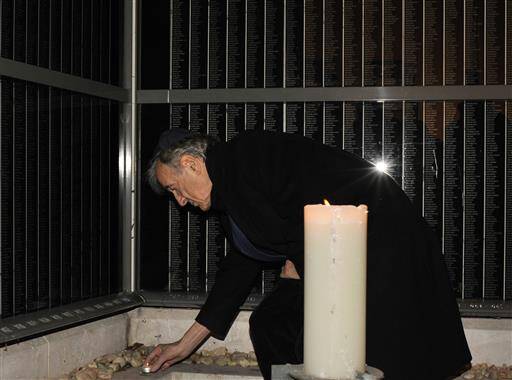 My first encounter with Elie Wiesel came with reading Gates of the Forest, for Wiesel, an almost hopeful and, therefore, unrepresentative novel in his mournful body of work. In the preface he tells the story of the revered Hasidic Rabbi Baal Shem Tov.

The story goes, “When the great Rabbi Israel Baal Shem-Tov saw misfortune threatening the Jews, it was his custom to go into a certain part of the forest to meditate. There he would light a fire, say a special prayer, and the miracle would be accomplished and the misfortune averted.”

In succeeding generations, when their people were threatened, rabbis would return to the forest seeking salvation for them. But in the next generation, a rabbi had forgotten how to light the fire. In another, the rabbi forgot the prayer. In the third generation, the rabbi does not even know the place.

This last rabbi prays to God, ‘‘I am unable to light the fire and I do not know the prayer; I cannot even find the place in the forest. All I can do is ask You to redeem us, and this must be sufficient.’’

The narrator reports, “And it was sufficient.” The rabbis’ story is a classic parable of faith in God’s unfailing love to the Jewish people. In its way, Gates of the Forest is an expression of post-Holocaust Judaism, holding on to faith even when experience gives every reason to believe God is dead.

The novel itself tells the story of young man, Gregor, who like Wiesel, escapes from the Holocaust, only to be betrayed by his Christian neighbors among whom he has been hiding. By the end of the war, he escapes to Paris, where he is married, and then migrates to New York.

Profoundly depressed by the weight of his people’s suffering, Gregor attends a Hasidic service where his alienation grows deeper still as he encounters the congregation’s joyful faith in its communal dancing. Then a young boy grabs Gregor by the hand to lead him to join the dance and—perhaps—to cross over to hope.

To the end of his life, the weight of suffering pressed down on Wiesel. Once at a White House Millennium Evening in 1999, where he was the featured speaker, I asked the Nobel prize winner, “What gives you hope?” He responded tartly, “My despair.”

The United States was then two weeks into the NATO bombing campaign in Kosovo; the war in the Balkans was nearly a decade old. The carnage throughout the former Yugoslavia, and especially the ethnic cleansing, I suspect, raised fearful specters for Wiesel and many other Holocaust survivors. But Wiesel spoke honestly. Despair clung to him, and he to it.

If anyone had a right to despair, I suppose, Wiesel did.  That despair never left him. Like Jeremiah, he became a prophet whose message soured within him, so that he ceased to see any light.

There were times in his early career when he drew broader messages for humanity and for the Jewish people. Dawn, the sequel to his better known Holocaust novel, Night, not only showed sympathy for a Gentile British officer, but offered a prophetic critique of the Sabra ideal of securing Israeli statehood through unrestrained force.

Elisha, a Holocaust survivor, who bears the name of the young farmer Elijah anointed to continue his prophetic ministry, is persuaded by a friend to go to British Mandate Palestine, to join a group of Jewish freedom fighters. Even before independence, the dream of liberation has devolved into a terrorist nightmare that envelops the young recruit. The Jewish resistance has kidnapped a British officer, John Dawson, and if the British do not meet the terrorists’ demands, the partisans threaten to execute Captain Dawson at dawn.

Elisha, who has only killed in combat, feels he has never killed in cold blood. He is thrown into turmoil at the naked prospect of being a terrorist executioner. He is haunted by the faces of so many already cruelly killed, and most of all of his own face as an innocent young man.

At first light Elisha goes to meet Captain Dawson. He takes a letter from Dawson to mail to the condemned man’s son, and then without pausing shoots the prisoner dead. The last word on Dawson’s lips are “Elisha.”

It was Night, not Dawn, that captured the public imagination and Night also took an unyielding grip on Wiesel’s heart too. Even as over the decades the Israeli occupation of Palestine grew worse, Wiesel could no longer find a prophetic word to speak to the nation born of Elisha’s crime. The promise of Dawn that Wiesel would be a witness to universal humanitarian values and the call to honor in wartime had been lost.

Wiesel will always be remembered as a witness to the Holocaust. He was faithful to the Jewish people. Unlike other witnesses to the horrors of the twentieth century, Nelson Mandela, Martin Luther King, Kim Dae Jung, Dietrich Bonhoeffer and many more, however, he failed to be a witness to the dignity of all humans everywhere even as he fought for the liberty of his own people.

Most of all, Wiesel failed to testify against the hardness of heart that he once understood can arise out of defense of one’s own people. Fortunately, we have Dawn as evidence that there was a time when, a young Elisha, he understood that hardness of heart and bore witness against it. He had for a time, at least, worn the mantle of the true prophet ready to denounce evil wherever it appeared.

Drew Christiansen, S.J., is the former editor of America and Distinguished Professor of Ethics and Global Human Development at Georgetown University.

Drew Christiansen
Show Comments (
2
)
Comments are automatically closed two weeks after an article's initial publication. See our comments policy for more.
Vince Killoran
5 years 10 months ago
A nuanced and humane account of Wiesel's life & work.
William Rydberg
5 years 10 months ago
One would hope that during his long life, he would have come to an understanding that authentic Catholics have always understood Judaism as not a separate Religion. One wonders if this understanding was ever proposed to him, The profession by Catholic's that Jesus is God-come in the flesh, notwithstanding. I read somewhere whereas he explained that certain sufferings experienced during the Shoah were individually greater and more horrific than what Jesus experienced in his Passion. He is likely right, but the point is that Jesus is God Incarnate. And his ultimate good was obedience to the Father in filial piety. Jesus is a divine Person. May his soul and all the souls of the faithful departed through the Mercy of God rest in peace. Until the Resurrection... Blessed be the Holy Trinity