The Editors on Hans Kung 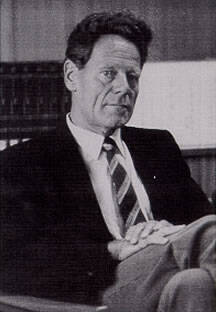 If our Protestant brethren still wondered whether our hierarchy is a monolithic bloc, the activity and comments of our bishops during and after Fr. Hans Küng's recent lecture tour must have proved something to them. Cardinal Cushing, Cardinal Ritter and Archbishop Alter, for example, listened to what the Tübingen theologian had to say; there were others who let it be known they didn't want him around.

Now that the visiting Vatican Council expert has returned to Germany, one hears complaints that some of his remarks were difficult to understand. The observation pinpoints an important, and often overlooked, fact about Fr. Kung's tour. He spoke only in a university context or the equivalent.

Theological discussions at high levels for specially chosen audiences have a way of getting into newspapers in these ecumenically exciting times, especially if a theologian's reasoning leads him to advocate internationalizing the Roman Curia, abolishing the Index of Prohibited Books and recognizing marriages by Catholics before non-Catholic clergymen. And it is difficult for the press to handle ideas like these in the scholarly context in which the speaker developed them. All too often they are reported in a bold, eye-catching fashion which may well have the effect of upsetting readers unfamiliar with academic discourse. We say this even though we are aware that some papers did a fair job of reporting Fr. Kung's reasoning as well as his conclusions.

Of course, if critics of the Swiss-born theologian's American lectures are adamantly wedded to the status quo, not even the most competent reporting in depth would have mollified them; for Fr. Küng very definitely wants changes in the Church. Such reporting wouldn't have appeased those, either, who feel that the 35-year-old theologian is much too young to be talking the challenging way he does. Cardinals could make the same proposals he did and there wouldn't be a whisper of complaint. This raises the question: how far down in the Church does discussion of the Church's methods and procedures properly take place?

That was what Fr. Kung discussed everywhere he went. Essentially, he kept asking: how is the Church with her message of freedom to be regarded as credible by the modern world if she does not show herself to be a place of freedom? He did not attack the teaching authority of the Church. He merely questioned the suitability of certain methods of administration and pastoral care in the Church. He claimed that authoritarianism in the Church's procedures tends to alienate the democratic world around her. He challenged nothing in the deposit of faith. He asked instead that we consider updating, for example, the present executive machinery of the Holy See, the method of dealing with books dangerous to faith and morals, marriage legislation made in what historians still call “modern history.”

We do not entirely agree with Fr. Kung, but we would not think of charging him with talking foolishness. Every single item he brought up had already been recommended by a cardinal or bishop for the agenda of the Second Vatican Council. Maybe he was imprudent to talk so much. Well, we like that quotation he took from Pope John's encyclical Pacem in Terris: “One must never confuse error and the person who errs.”

Tim Reidy
Show Comments (
2
)
Comments are automatically closed two weeks after an article's initial publication. See our comments policy for more.
Bill Mazzella
8 years 5 months ago
"Essentially, he kept asking: how is the Church with her message of freedom to be regarded as credible by the modern world if she does not show herself to be a place of freedom?" Many asked the same question under JP II and Benedict XVI. Many of the beneficial changes in the church came as a result of Kung's efforts. Yet a majority of Catholics today hardly know of him. Amazing. This is a result of the "damnatio memoriae" (removal from memory) that the Vatican is so good at. His monumental "On Being a Christan" continues to be read as a testament to truth and the faith. No doubt kung draws consolation and justification that a pope similar to John XXIII is now pope. Kung kept to his convictions while so many theologians cowardly succumbed to pressure and abandoned Kung. As a result theology went downhill for the last thirty or so years since Kung was censured. Many of the items Kung was censured for are now widely accepted in the church. He pressed for a clergy of service rather than privilege and stressed orthopraxy over orthodoxy. Unlike Luther Kung stayed and worked from within. To the everlasting benefit and gratitude of millions of Catholics who kept the faith because Kung"s leadership. Like most prophets he was not well received by the hierarchy. But he refused to deny the spirit with him and led with his convictions rather than choosing to save his job. Without question Kung would have made Bishop, Cardinal and perhaps pope had he succumbed to pressure. Because of Kung so many Catholics courageously kept their convictions. He chose to keep his integrity over official approval. Committed Catholics and Christians everywhere are in his debt.
Vince Killoran
8 years 5 months ago
Bill is exactly right There is a theological desert in our seminaries. Others are reading Kung but not our diocesan seminarians.