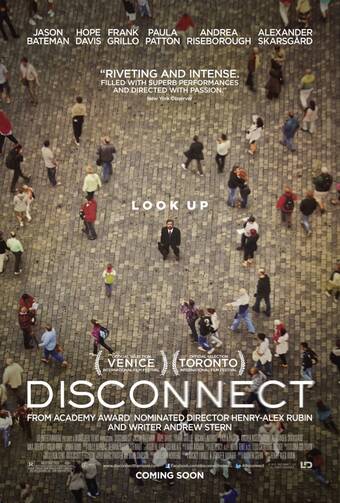 When I saw, recently, the excellent movie, "Disconnect," about the destructive potentials in internet use, I was led to reflect or notice the following items. Item #1: In late February of this year, I spent four days in Northern Minnesota giving some lectures at Saint John's University, Collegeville. For those four days I was without access to telephone, internet and television. I reflected that this was a good Lenten fast and one I should build on further. It was a kind of healthy disconnect from technology which allowed me to connect better to the landscape, the people and the reflective space of Saint John's Abbey Church in ways I would not otherwise have so done. I do not have a cell phone and am not a member of Facebook. I do not watch much television but, often enough, I do find myself overly addicted to some mindless internet scrolling.

Item #2: I live on a university campus at the University of San Francisco and go regularly to a gym in mid-town San Francisco. I have often simply gazed in utter wonder at the number of students mindlessly texting while crossing the street, on their cell phones talking or with plug ins in their ears listening to music. I have often wondered if they ever give themselves time for silence and reflective time. At the gym, I often fume at young men and women sitting on a machine I want to use, not using the machine but texting. I can not recall how often I have had to put out my arms to protect myself from a mindless texter about to walk into me.

The movie, "Disconnect," weaves together three stories about on-line internet chatting. In one, two young high school students pretend to be a young girl attracted to a talented but  isolated nerdy student. He is quite taken by this new connect and is led to post a picture, in response to the so-called girl's request, of himself naked with the words, "Your Love Slave", etched on his thighs. The two high school cyberbullies than make his picture go viral all over the high school. The boy is mocked and made fun of and he attempts suicide. Certainly cyber bullying is a negative impact of internet chat sites.

The father of one of the cyber bullies is a specialist on internet crimes. He is called in by a couple who are victims of identity theft through the internet. The couple have lost a child to premature death. But neither communicates well about their feelings. The husband becomes addicted to on-line gambling sites. The wife takes up a long-standing conversation on a chat-line dedicated to grieving people. She talks to a man who had lost his wife to cancer ( the man, however, lies about his age by about twenty years). The specialist on internet crimes suggests that the identity theft may have been made by the man the wife talked to.

Many of the main protagonists in the film engage in on-line chats because they are, in other ways, disconnected from their own feelings, from friends and true relationships. Virtual reality takes over from real and ordinary reality. There is, too often,  a real gulf between on-line and real-world intentions. To be sure, at times, use of the internet can lead to distraction, deception and destruction.

Reading several of the reviews of the film on the website, Rotten Tomatoes, I was struck by several mis-readings of the film by some film critics. One chided the film for only showing the destructive elements in anonymous on-line chat sites. Yet, in the film, the victim of the cyber-bullying's father goes on to read his son's conversations with the anonymous would-be girl. He learns new things about his son and his son's own feelings of disconnect with his father. He tries to contact the would-be girl on-line to find out more about his son. In the process, he talks to one of the cyber-bullies who begins to have a deep remorse for his actions and to show sympathy to the father. So, anonymous, virtual reality disconnect actually eventually leads to a true connection. Similarly, the couple grieving their dead son read each other's on line communication. The husband learns of his wife's grief and deep feelings of being shut out by him and, thus, does begin to connect.

A second reveiwer is a bit naive and innocent when he claims: "Our technology is only as evil as the uses we put it to." That reviewer thought virtuous people would not get sucked into dangerous online sites. But there are subtle and pervasive clues in our society which draw people to on-line chatting (Facebook and Twitter strongest among them. I get chided by friends because I will not do Facebook). Just as consumers as individuals are not equal to the power of advertising so they need to heed that cautionary warning: Buyer, Beware!--so, too, online users need to reflect more deeply on the addictive and deceptive elements in online chatting and use of sites.

Yet, one must be careful not to overstate the clash between real reality and virtual reality—as if the two are always at war with one another. As in spirituality, we need to attend to our real feelings, attractions, delusions, temptations and learn how to communicate them to God, in prayer, and to friends or spiritual directors. We need to avoid whatever keeps us from connecting to such real feelings and relationships. But we also know  that, in spirituality, there is a role for a kind of virtual reality: not the world as we live it and know it but the world as God wishes it. In point of fact, much of Ignatian spirituality involves a kind of movement toward virtual reality, when we imagine ourselves, for example, as a personage in a gospel scene so as better to feel, resonate with and embrace the essential challenge of Jesus.

Years ago, the Jesuit polymath, Walter Ong, wrote a book, Orality and Literacy: The Technologizing of the Word, about the subtle shifts in consciousness in the move from an oral to a literate culture based on printing. Much was lost and much gained in the shift. Discernment called for a renewed attention to the new world of printed texts and how they shape our choices and ways of seeing the world and being in it. Much the same kind of thoughtful reflection needs now to be given to the shift form written texts to online communication. Sometimes we will need, for a healthy spirituality, to disconnect from the virtual reality of the internet. Sometimes, we will need to know how to use it as a prod from virtual reality to our overly one-dimensional reality or as a way of  helping us see how we already disconnect in our real lives. Just as writing was not an adequate substitute for oral communication, so the internet is not an adequate way to connect and have real relationships. At times it can lead to a disconnect with ordinary reality and relationships.

John A. Coleman
Show Comments (
1
)
Comments are automatically closed two weeks after an article's initial publication. See our comments policy for more.
Helen Romero
9 years 3 months ago
Very thoughtful article, thanks for sharing. And if I may add to what you have already thoughtfully and wonderfully laid out: In this postmodern world, it seems that we no longer have the truth to guide us and no roots to ground ourselves. With the globalized world of technology, our community life is lived elsewhere, mostly in cyberspace (facebook!). In a world dominated by (social and mass) media narratives produced through advanced technology and shaped by market economy, we inhabit the space of pseudo- and virtual realities where fictive and staged images substitute our own. Or, at its worse, we see reality only through fiction. It does not help any, that most programs on television are now dubbed as “reality shows” further obscuring the pseudo in pseudo-reality. In this current state of the (media-saturated) world, can we ever find real meaning in our lives and a sense of home?” But as you have pointed out in your article, we begin to connect when we learn to “hear,” “read,” and “see” the other person, whether in real or virtual space. Thanks, again, this is a great “read”!