The Dignity of the Vulnerable 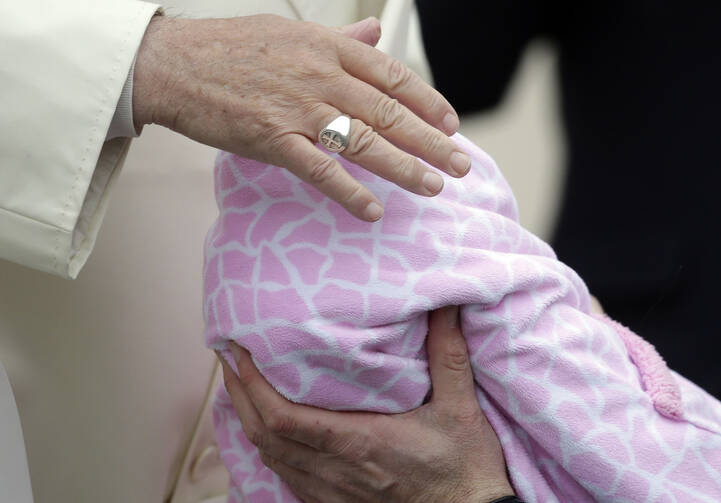 "The dignity of the human person and the common good rank higher than the comfort of those who refuse to renounce their privileges" (218). In a simple sentence, Pope Francis summarizes the bedrock of Catholic social doctrine: human dignity, the common good and the preferential option for the poor and vulnerable. While he states that "Evangelium Gaudium" is not a social document, it offers an integrated spirituality that links the church's social teaching and evangelization, since “Our faith in Christ, who became poor, and was always close to the poor and the outcast, is the basis of our concern for the integral development of society’s most neglected members” (185).  In 85 pages, there is much on poverty as exclusion, inequality as social sin, poverty and violence, unjust economic structures and the idolatry of money, to name a few. All of these issues are highlighted because the primary mission of evangelization is the good news that is God’s love for all.

“How can it be that it is not a news item when an elderly homeless person dies of exposure, but it is news when the stock market loses two points? This is a case of exclusion. Can we continue to stand by when food is thrown away while people are starving? This is a case of inequality” (53). As he often does, Pope Francis challenges himself and us to look in the mirror.  In New York, the “Breadlines Return” and homelessness is at a decade high and rising. In Los Angeles, the City Council is considering a ban on feeding homeless people in public. Who do we see when we look in the mirror? And who do we see when we walk down the street? “A lack of solidarity towards his or her needs will directly affect our relationship with God” (187). Indifference to homeless persons in New York harms my relationship with God. “If someone says, "I love God," and hates his brother, he is a liar; for the one who does not love his brother whom he has seen, cannot love God whom he has not seen (1 John 20). The context is current, thus new, but the message is not. From the Bible, Chrysostom and Aquinas, to his immediate predecessors, Pope Francis is reiterating a concern for the dignity of vulnerable that is first and foremost God’s concern and therefore it must be ours.

Poverty is exclusion and “those excluded are no longer society’s underside or its fringes or its disenfranchised – they are no longer even part of it. The excluded are not the ‘exploited’ but the outcast, the ‘leftovers.’" (53) The ultimate violation of human dignity is to no longer be counted as a human person. The response must be inclusion and participation. In a speech to the UN working group on sustainable development, Archbishop Chullikatt urged “Inclusion, on the other hand, means inviting the poor to participate in the world’s economic, social, political and cultural systems as full partners, building up their capabilities so that they can take their deserved seat at the table for all, as equals, so that economic exchanges will be mutually beneficial and that politics will involve real partnerships.” Thus Pope Francis calls for a radical reevaluation of economic structures and a return to person-centered ethics as animating these structures.

Justice as participation animates the church’s social mission lived out from our parishes to our advocacy at the United Nations. And it is the responsibility of us all. “I prefer a Church which is bruised, hurting, and dirty because it has been out in the streets, rather than a Church which is unhealthy from being confined and clinging to its own security" (49). Thus "Evangelium Gaudium" places the work of the Catholic Campaign for Human Development and Catholic Relief Services at the center of the church’s evangelization. In doing so, we are all invited to live out “An authentic faith—which is never comfortable or completely personal—[and] always involves a deep desire to change the world, to transmit values, to leave this earth somehow better that we found it” (183).

Meghan J. Clark
Show Comments (
2
)
Comments are automatically closed two weeks after an article's initial publication. See our comments policy for more.
Bill Mazzella
8 years 7 months ago
Hopefully, the church as empire will be over. The church of the poor and the captives will live.The church of the good news, the gospel.
Bruce Snowden
8 years 6 months ago
Let's call him Joe. He was the neighborhood's homeless man who liked everyone. Judging from his funeral in the parish church he was also well-liked by many. The church was packed. The story has it he was a twin who one day got into a domestic arguement with either his father, or twin brother, which led to his Dad's accidental death, The outcome so rattled both him and his twin brother that the two abandoned their home for the streets. The local pastor and others repeatedly tried to rehabilitate Joe, but back to the street he would go. Neighborhood people gave him money for food - he wasn't a drinker, and on at least one occasion he brought back to the donor change after getting something to eat. The gentleman who told this story told me Joe was very honest and thought he had received too much money! Once when I passed him I reached into my pocket and gave him quarter - very generous of me! Immediately Joe flung his arms around me in a tight hug of thanks! The Sin of Human Respect sunk its teeth into my soul as I looked around embarrassed to be seen being hugged by this homeless person! When he let go I smiled at him hurrying away. Suddenly shame bent me low being a Professed Secular Franciscan whose spiritual Father unashamedly embrace a leper and who was called the "Little Poor Man" remembering how embarrassed I felt by the embrace of a "social leper" so to speak, a homeless man. As I walked away it dawned on me that Joe had given me ALL he had to give - all his love from his big heart and at the moment I failed to accept that Grace. Yes, Joe did give me all he had to give, including his body odor now embedding on my clothing, easily washed away. His love however, will never wash away and I believe I am a better Franciscan through repentance. Joe used to come to church and say the Stations of the Cross. It was raining hard one morning on my way to early Mass and there on the concrete handicapped entrance to the church I saw Joe soaked and stretch out in the shape of a Cross, dead in the soaking rain near his Jesus in the holy Stations. A few days later the Parish buried him with a beautiful Mass choir and all, with a packed Church giving tribute to "The Dignity Of The Vulnerable." I am sure Joe is up there in The Land of the Living with the famous "hobo" Saint, Benedict Joseph Labare, who also died on the church steps of his church a street person like Joe, homeless!