The 'Crucified People' of South Sudan 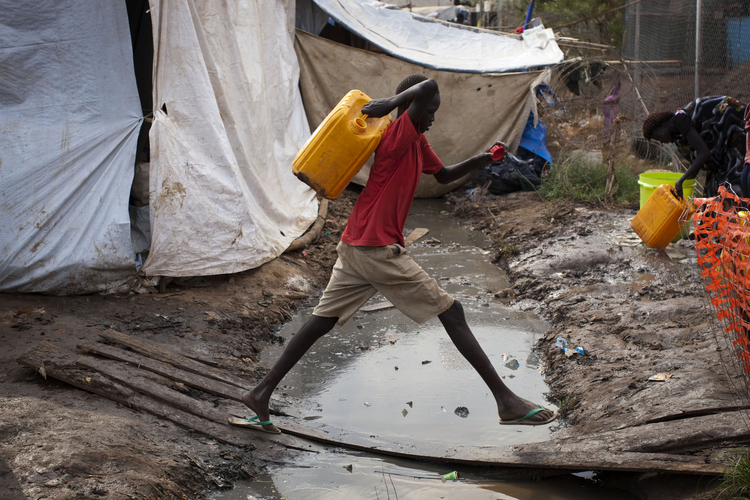 “It is mercy I desire, not sacrifice.”

Evaristo is our night watchman. His 13-year-old son, Joseph, died this week while having an epileptic attack. When we went to pray with the family, we heard the cries of lamentation well before we came to the house. Joseph was lying in bed on a simple mattress outside, under the light of the moon. A piece of gauze that went around his face and under his chin was tied on the top of his head, to keep his mouth from dropping open. I imagined that Jesus must have been bound in the same way after his death on the cross. Crowded together on the same bed were his mother, grandmother and many others. Evaristo had gone to find some friends who would help dig the grave. This was the third time he had done this; another son died some months ago of a snakebite, and another died a few years ago of malaria.

Evaristo is one of the “crucified people” whom Jon Sobrino, S.J., a theologian in El Salvador, writes about in his book The Principle of Mercy: Taking the Crucified People from the Cross.

The essays in Sobrino's collection bear on one of the most pressing signs of the times: the existence of a "crucified people," the poor and oppressed of our world, whose suffering presents Christian faith with an urgent demand - that we "take them down from the cross." Writing from the Salvadoran context, he presents a "theology of mercy," reflecting on the principles of mercy and solidarity as the mode of Christian witness and discipleship in a world of conflict and suffering.

The entire book can be summed up in Sobrino’s words: “The sign of the times is the existence of a crucified people, and the prime demand on us is that we take them down from the cross.”

This year I am living on our Solidarity farm in a remote village called Riimenze, in Yambio County. I thought that I had seen poverty before, but this is a kind of poverty that I have never experienced. It is more than a material poverty. It is a kind of “ignorance”—a people unaware of their beauty, their dignity and their sacredness; an “unschooled” people who, for the most part, do not value education. The school has no tables or chairs; the children sit on rocks or large Nestle powered milk cans. The four teachers often do not show up, and when they do, they are often intoxicated.

Indeed, the “crucified people in our midst.”

The announcement by Pope Francis of a Year of Jubilee, a Year of Mercy, will give us plenty of time and space to think about the crucified people in our midst and what are we doing to take them down from the cross.

The second reading for the Fourth Sunday of Lent gives us something to think about and to pray about. The reading ends with this sentence: “We are God’s work of art, created in Christ Jesus for the good works which God has already designated to make up our way of life” (Eph 2:10).

During these remaining days of Lent may each of us know, deep in our hearts, what are those good works that God has already designated to make up our way of life.