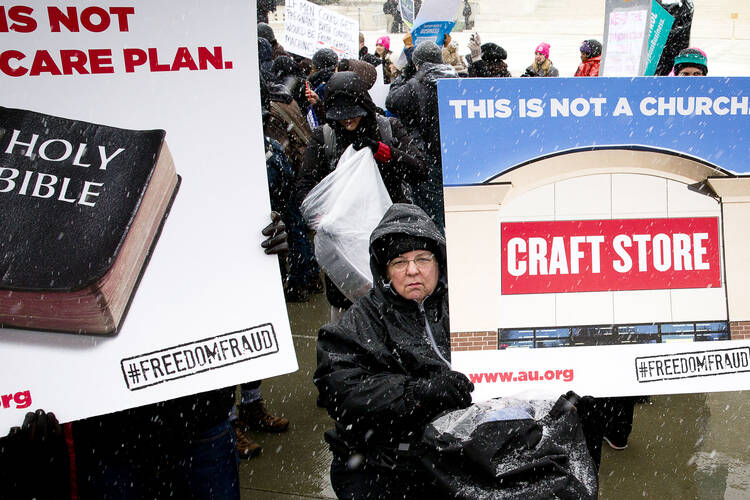 We hold these truths to be self-evident, that all men are created equal, that they are endowed by their Creator with certain unalienable Rights, that among these are Life, Liberty and the pursuit of Happiness.

In the last days of its recent session, the Supreme Court of the United States, citing the Religious Freedom Restoration Act of 1993 (RFRA), ruled in the matter of Burwell v. Hobby Lobby Stores that “closely held corporations”—like Hobby Lobby and the other plaintiffs—possessed rights, by virtue of their owners, that prevented the government from imposing upon them a requirement that “substantially burdens their exercise of religion.” Juxtaposed to the recent debates about the court’s decision in Citizens United, which seemed to many to grant corporations rights to freedom of speech, this latest decision causes some concern among many people who see rights as the unique purview of natural persons.

Even if one opposes the contraceptive methods which are the source of the Hobby Lobby case—believing they are not contraceptive at all but the cause of early term abortion—one may well question the wisdom of attributing to corporations a right to the free exercise of religion. Corporations, which cannot bear the fundamental burdens and responsibilities of citizens, are legal ﬁctions created to protect individuals from liability and risk, so as to encourage investment and economic development. So it is that a corporation such as Hobby Lobby, through its board or other governing structure, determines investments, pays its employees, contributes to their health care, etc., while the owners are shielded from personal liability in the functioning of the corporation. What “rights” such entities have are determined by the legislature, and, historically, were not seen as intrinsic. In attaching the rights of the owners, as individuals, to the corporation, as a legal entity, many wonder if we are not on the way to giving to those who own corporations a double-dose of rights, and thereby placing their rights over and above the rights of employees and ordinary citizens. Such actions seem to many to betray a misconception about the nature and source of our rights; which, as Americans, we believe emerge from nature, and which, as Christians, we believe are rooted in our divine communion with God.

To see better the debate on corporate rights, we should examine the notion of rights themselves. For some, rights are simply legal protections, granted by naturally free individuals for the purpose of securing one’s own self-interest. John Locke, in whose theories many see the origin of the American view on rights, believed that, in the state of nature, individuals were all at war with one another; and each gave up some of his or her natural liberty in order to maintain adequate security. Thus, certain rights are “unalienable” not because they are intrinsic to human beings, but because they are necessary conditions for people to pursue their personal interests: e.g., we both have a right to life, because if we are trying to kill each other, we can’t do what we want; we both have a right to liberty, because I don’t want you telling me what to do, so I agree not to tell you what to do; we have a right to pursue happiness, because it’s in our mutual interest to protect each other in doing so. And while governments are instituted to maintain this fundamental balance between naturally warring parties, the essentially contractual nature of rights does not end with government. Thus, I support a legal structure for the “right” to free speech because it is in my best interest, in the long run: either because I might have a minority opinion at some point, or because I can proﬁt from the interaction that produces better solutions to society’s problems. But, I may give up this right (for myself or others) if I judge security to be more important than free speech. In such a situation, rights are not inherent in the individual, but are granted—e.g., by the majority (when all are equal), or by the ruling class (when they are not)—because it seems prudent for the parties. All rights are thus contingent on the perceived needs of the group.

This, of course, radically oversimpliﬁes a complex group of theories; but it also suggests why the United States has been better at securing “negative rights” (the right not to be hindered in something, e.g., ownership of guns) than it has been in providing “positive rights” (the right to have something, e.g., health care). Further, it illustrates why many traditional conservatives or libertarians worry about granting the rights of citizens to corporate structures, since it means that the owners are somehow given disproportionate power, and the rights of those with wealth supersede the rights of those without.

For Catholics, however, whose grounding of human rights is quite different than it is for libertarians such as Locke, there is an even more profound objection to the notion of corporations having rights.

In the tradition of the church, rights are not the product of a contract between naturally warring parties. Rather, human beings have a purpose, a reason-for-being deﬁned by God, a telos (to use Aristotle’s term). This spark of God given in our creation, draws us forward, and when we are discerning well, moves us to exercise virtues that are universal—virtues such as courage and friendship, generosity and compassion, loyalty and trust, humility and magnanimity—which form, within a community, the essence of true human happiness. In such a model, fundamental rights are not granted by the state nor by the majority, but by God, who has made us to shine with the Divine image and likeness by becoming what we can be—by living towards our telos, insofar as our human powers and situation allow us. Human beings have a right to pursue the good life of communion and justice; indeed, we have a duty to do so.

Called, in the nature given us by God, to be good and to do good in the world, we, thus, have the inherent right to that which can reasonably be provided to help us fulﬁll our call. For this very reason, Catholicism has long supported both negative rights, such as personal liberty, and positive rights, such as basic health care, for all people of the earth. The question, for Catholics, is not if people have these rights, but how best to secure them.

In this view, organizations—governments, corporations, etc.—exist as means to the end of human ﬂourishing, without intrinsic value. To ascribe to a corporation the basic rights of a human being, therefore, is not just mistake, but a type of idolatry: putting a ﬁction of our own making on an equal status with a human being whose end is ordered by God; and then giving that ﬁctional entity the authority to make moral decisions on behalf of natural persons. Though certainly not the intent of the Court, we do well to ask ourselves if the ultimate effect of decisions such as Hobby Lobby and Citizens United is to do more than grant disproportionate rights to the owners of corporations, but also to eradicate the distinction which raises the human person above a merely legal creation.

This past weekend, we celebrated the beginning of that great experiment in liberty known as the United States of America. As Catholics and citizens, we should pray with gratitude for all that has been done to allow “the pursuit of happiness” through this nation—and dedicate ourselves to all that has yet to be accomplished. Understanding our rights, and understanding how best to secure them for all is part of our duty, part of our call, part of our mission in this nation, and in this church.

John D. Whitney, S.J., is pastor of St. Joseph Church in Seattle and a former provincial superior of the Oregon Province of the Society of Jesus.

To describe a corporation as a legal fiction denigrates and distorts it. One could say the same about a nation state or a church. It hardly captures the full meaning of the organization. A corporation is an organization established with certain rules and regulations and protections to permit people to pursue their vocation in the world of business. So, businesses, hospitals, schools, newspapers, unions, orphanages, charitable organizations, and churches can be corporations. People should not lose their fundamental human rights just because they wish to express their organization's work through incorporation. It is part of the right to freely associate. As pointed out below, is the incorporated journal America really so detached from the Jesuits that the entity has no free expression rights, or protections as a Catholic organization?

More of a legal fiction is the contraceptive mandate, since it was not voted into law by Congress but created by the Obama administration after the AHA was voted upon. Likewise, the so-called accommodation is an affront to basic human rights.

In an excellent piece in the WSJ (http://online.wsj.com/articles/best-of-the-web-today-without-reason-or-…) an analogy used by Judge Richard Posner in the Notre Dame defense is described. To paraphrase: A Quaker who considers pacifism a tenet of his religion tells the selective service officer he is a conscientious objector. The officer accepts the sincerity of his refusal to bear arms and excuses him, but only if the Quaker signs a form declaring his religious objection and also directing the officer to draft someone else to fight in his place. Since his religion teaches that no one should bear arms, drafting another person in his place would make him responsible for the military activities of his replacement, and by doing so would substantially burden his own sincere religious beliefs.

That is what the accommodation does. It gets the corporation to act as contraceptive agent for the government. The fact that Justices Ginsburg, Sotomayor and Kagan fail to see this is frankly amazing to me, even more so since the RFRA requires any government to choose the LEAST restrictive means when overriding a person's freedom of religion. There are so many other less restrictive means the government could have chosen.