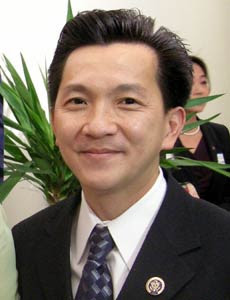 This from the National Jesuit News: U.S. Representative Anh "Joseph" Cao (R-La.) spoke with National Jesuit News about the process of discernment that he uses in reaching decisions as a U.S. congressman, how those decisions are grounded in his background in Ignatian spirituality and why he didn’t chose the party line in voting for health care reform. A Vietnamese-born lawyer, the first Vietnamese-American to be elected to Congress, and a former Jesuit seminarian, Cao is the current U.S. Representative from Louisiana's 2nd congressional district and was the lone Republican congressman to vote for landmark health care reform on November 7, 2009.

National Jesuit News:As a Jesuit scholastic, you experienced the Spiritual Exercises, a foundational piece of Ignatian spirituality from Jesuit founder Ignatius Loyola. Now, as a congressman, do you find that you use the Ignatian principles of discernment as you reach your political decisions? Has a grounding in Ignatian spirituality helped shape your political decision making process?
Cao: I still use the Ignatian methods almost every day, from examination of conscience back to the methods of the 30 day retreat. I do that very often. Using the whole process of discernment to see where the Sprit is moving me has been extremely important, especially in my recent decision to support the health care reform plan. The Jesuit emphasis on social justice, the fact that we have to advocate for the poor, for the widow, for those who cannot help themselves, plays a very significant part. But at the end of the day, I believe that it’s up to, at least from my perspective, understanding what does my conscience say, how is the Spirit moving me. I use that almost every day in my decision-making process. The issues that we contend with in Congress affect every single person here in the United States, so I want to make sure that my decisions are based on good principles and good morals.
For example, right before the [health care] vote, I actually went to Mass and I prayed. And the theme of the day was one of the readings from Isaiah. The priest gave the homily about be not afraid, so I really felt a personal touch during this homily, that this homily was meant for me. I was going through a lot of turmoil, debating on what was the right decision, knowing the fact that if I were to vote ‘yes’, I would be the most hated Republican in the country. [laughs]. So, it was a tough discernment process but I felt during the Mass that it was speaking directly to me. It gave me the strength to say ‘yes, you have to make the right decision’ and 'be not afraid’ to do it because ‘I will go before you’ so that is why I supported the bill knowing the fact that I would be the only one.
Read the rest here.
James Martin, SJ