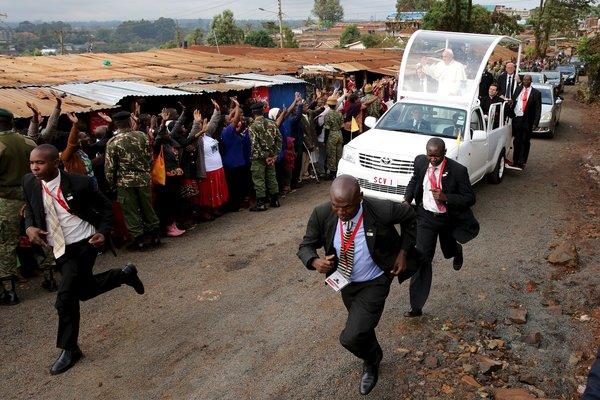 Cambridge, MA. — Readers will know that most of my posts have to do with interreligious dialogue, and the deeper learning that occurs when we take each other’s religious traditions seriously. You will also know that I’ve insisted, again and again, the interreligious cooperation and commitment are distinctive features of the church today. Good Catholics embrace dialogue; it is only our latter-day cafeteria Catholics who think they can omit dialogue from their theology, piety and practice.

In any case, in the past few days I’ve been struck once again by how Pope Francis is giving his own interpretation to the importance of dialogue. Consider what many of us read in The New York Times on November 27, the day after Thanksgiving, about the visit of Pope Francis to the Kangemi neighborhood—community, slum—of Nairobi in Kenya, as part of his first visit to Africa. During this poignant and perfectly wonderful visit to the poorest and most vulnerable, Francis made starkly clear the concern of the Church and the responsibility of Christians in Kenya and globally: “I wish to call all Christians, and their pastors in particular, to renew their missionary zeal, to take initiative in the face of so many situations of injustice, to be involved in their neighbours’ problems, to accompany them in their struggles, to protect the fruits of their communitarian labour and to celebrate together each victory, large or small. I realize that you are already doing much, but I ask to remember this is not just another task; it may instead be the most important task of all, because 'the Gospel is addressed in a special way to the poor.'"

In this context we can discern and notice Francis’ particular slant on interreligious dialogue. Certainly, he remains steadfast in affirming Vatican II’s commitment to dialogue as an indispensable and irreversible dimension of the Church’s work in the world. So too, as in the interfaith service at Ground Zero during his American visit in September, Francis remains firm in showing, in word and practice that people of different faiths needs to work together and pray together, in powerful witness and strong rebuke to those who cloak violence and selfishness in religious language. He states this clearly in Thursday’s interfaith gathering in Nairobi:

Ecumenical and interreligious dialogue is not a luxury. It is not something extra or optional, but essential, something which our world, wounded by conflict and division, increasingly needs. Indeed, religious beliefs and practice condition who we are and how we understand the world around us. They are for us a source of enlightenment, wisdom and solidarity, and thus enrich the societies in which we live. By caring for the spiritual growth of our communities, by forming minds and hearts in the truths and values taught by our religious traditions, we become a blessing to the communities in which our people live. In democratic and pluralistic societies like Kenya, cooperation between religious leaders and communities becomes an important service to the common good. In this light, and in an increasingly interdependent world, we see ever more clearly the need for interreligious understanding, friendship and collaboration in defending the God-given dignity of individuals and peoples, and their right to live in freedom and happiness.

Francis’ habitual slant on dialogue is becoming familiar. In "Laudato Si'," for instance, he insists that there are many dialogues are now part of the work of the church, and interreligious dialogue is one of those undeniable dialogues:

The majority of people living on our planet profess to be believers. This should spur religions to dialogue among themselves for the sake of protecting nature, defending the poor, and building networks of respect and fraternity. Dialogue among the various sciences is likewise needed, since each can tend to become enclosed in its own language, while specialization leads to a certain isolation and the absolutization of its own field of knowledge. This prevents us from confronting environmental problems effectively. An open and respectful dialogue is also needed between the various ecological movements, among which ideological conflicts are not infrequently encountered. The gravity of the ecological crisis demands that we all look to the common good, embarking on a path of dialogue which demands patience, self-discipline and generosity, always keeping in mind that ‘realities are greater than ideas.’ [n. 201]

Authentic Catholicism cannot neglect dialogue, even when this does not silence the necessary and distinctive voice of Christians, as the same encyclical shows:

Furthermore, although this Encyclical welcomes dialogue with everyone so that together we can seek paths of liberation, I would like from the outset to show how faith convictions can offer Christians, and some other believers as well, ample motivation to care for nature and for the most vulnerable of their brothers and sisters. If the simple fact of being human moves people to care for the environment of which they are a part… It is good for humanity and the world at large when we believers better recognize the ecological commitments which stem from our convictions. [n. 64]

In the following pages of the encyclical, Francis sensitively find his way through key Biblical texts, to discern the Christian starting points for our care for the environment and our protection of all living being. Dialogue, compassion, and justice form the substance of Christian witness today, and make clear, rather than obscure, what the Good News of Jesus Christ means in today's world.

Francis thus is beginning to show us that he has as distinctive a stance on interreligious dialogue as did his predecessor Joseph Ratzinger, Benedict XVI. He is no less an intellectual; he is just a different sort of thinker. If Benedict was concerned primarily about doctrinal purity and the danger of relativism, Francis is concerned primarily about charity, love, and service, including a direct religious and Christian response to the most urgent needs of our world today. He has not shown any hesitation or timidity regarding doctrine and truth; neither has he equated doctrinal correctness with the mission of the Church. He has not dwelt on the nature of the relationship among religions, but simply insisted, over and again, that religious people must work together, learn from one another, and pray together. We are all, as it were, in the Kangemi slums, and we shall be judged by our compassion, our charity, and our refusal to turn away from those in direct need. Those of us who are scholars ought not to leave our desks or stop writing our books, but we need to recognize very vividly and urgently the greater whole of which our writing is just a part. If our research, writing, and teaching, do not directly help the poor, we had better make sure that what we do in part of the compassionate, merciful and just work of the Church. But what the scholar, in the disciplined and quiet work of mind and heart, is to do, is the topic for another post.

In this light we can turn finally to Francis’s announcement of the Jubilee Year of Mercy that begins on December 8. It includes a turn to dialogue, as one of its ordinary, expected features:

I trust that this Jubilee year celebrating the mercy of God will foster an encounter with these religions and with other noble religious traditions; may it open us to even more fervent dialogue so that we might know and understand one another better; may it eliminate every form of closed-mindedness and disrespect, and drive out every form of violence and discrimination. [n. 23]

The opening of the Doors of Mercy tolerates no miserly controls of entrance: there are no border patrols keeping people away from God's mercy, regardless of religious differences.

But let me end hearkening to a different voice. This Sunday, the first Sunday of Advent, is Nov. 29, and so it marks exactly 35 years since the death of Dorothy Day in 1980. Who better than her to sum up what Francis has been saying again in our era:

What we would like to do is change the world—make it a little simpler for people to feed, clothe and shelter themselves as God intended them to do. And to a certain extent, by fighting for better conditions, by crying out unceasingly for the rights of the workers, of the poor, of the destitute — the rights of the worthy and the unworthy poor in other words, we can to a certain extent change the world; we can work for the oasis, the little cell of joy and peace in a harried world (The Catholic Worker, June 1946).