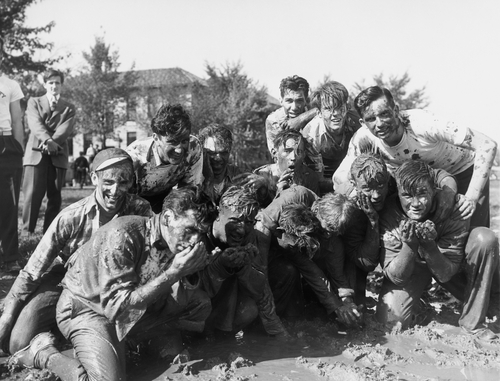 College fraternity scandals are back in the news. The University of Oklahoma has moved to disband the Sigma Alpha Epsilon chapter and punish its leadership following an investigation of their singing on a bus ride—with high school students they wanted to enlist—a racist song learned at National Leadership School four years ago. The song, which they captured on video, boasts that Sigma Alpha will never have a black member and refers to the lynching of a black person. The frat members, of course, apologized and had a sharing session with black students.

Meanwhile police at Penn State University have discovered Kappa Delta Rho Facebook pages with photos of young women, some naked and unconscious. The Washington Post describes the frat party culture symbolized by the rule, Never Go Upstairs—“the brothers plied female guests with bottomless cups of natural light while a DJ blasted pop hits in the beer soaked basement.” And the boys led selected girls upstairs. One young woman told the Post, “It’s never just one frat. It’s an entire culture that allows this to happen.” Eight months ago, on a site dedicated to hazing and drug deals, police found photos of naked girls, a girl vomiting, a nude cheerleader and strippers hired by the fraternity.

Last week at South Carolina University a Pi Kappa Alpha pledge was found dead. Depending on which document you Google, between 1838 and 2015 either 132 or 183 frat brothers have been killed in hazing, often after having been forced to drink themselves unconscious. One case that struck me was the death of Gordie Bailey at the University of Colorado in September 2004. When Gordie passed out after heavy drinking at the Chi Psi frat house during his initiation, his frat brothers, according to a “tradition” they said, scrawled slurs all over is 18-year-old body—arms, legs and torso— with sexual and racial slurs, including “It sucks to be you,” and drawings of male genitalia. Two weeks before, a sophomore at Colorado State died of alcohol poisoning after consuming 30-40 beers and vodka drinks in 11 hours. This could go on, but you get the idea.

In a New York Times op-ed Prof. Matthew W. Hughey, of the University of Connecticut, argues that fraternities, even when they accept non-white members, fail to truly integrate. They still presume the inferiority of black members. Nevertheless the Greek system must be preserved, he says. Professor Hughey misses the point. Any partial “reform” would violate the very raison d’etre of Greek life. What is the frat’s basic purpose?

It is: 1. elitist, 2. self-centered, 3. cultic, 4. secretive. Remove any one of these characteristics and the whole thing collapses. Elitist means membership is closed to all except those whom the brothers select. They select young men like themselves who, they believe, will be their exclusive “brothers,” bonded with them for life, for future jobs, political and business success. Attractive young men, like themselves, they believe, will attract attractive women from wealthy families with whom they can drink, “hook up” and maybe marry.

Self-centered means that they owe total loyalty is to their fellow members and their careers. This is unlike service clubs, where everyone is free to join if they are dedicated to serving the homeless, working in El Salvador during the Christmas break and summer, building homes in poor neighborhoods. The social fraternity might visit an orphanage for a day in the Christmas vacation, but its commitment is to itself. Ironically, the student who has pledged the frat in order to have friends will end up tied to a very limited list of “brothers” like himself and never have the university experience of expanding his choices.

Cultic means that every community must be held together by common experience. Service clubs are inspired by a desire for social justice, commitment to the poor. Music and art societies are thrilled by evenings at the opera and tours of the museums. Reading groups meet famous writers and study the classics for fun. Re-enforcing the aesthetic sense deepens their friendships with people often very different from themselves. But the fraternities, having no common intellectual bonds, create an artificial endurance test called hazing.

The logic is that if the new men can endure the hazing ritual—beating, humiliation, blindfolding, being dumped in the woods miles from home, drunkenness inflicted by forced guzzling bottles of vodka—they will be good friends. Recently Dartmouth student Andrew Lohse, in Confessions of an Ivy League Frat Boy, says the pledges were forced to wade in their boxer shorts through a pool of human waste and vomit. Students would face off and chug beers till one vomits on the other’s head. Why must they do this? Lacking higher principles, like religion, to unite them, they befriend the gutter as “brothers.”

Finally fraternities rely on secrecy to protect one another from the consequences of their irresponsible behavior. The brothers, terrified, will never rat on one another to the college authorities. In one hazing death after the other police face the cold wall of silence. There is no morality higher than the silence due to one’s brothers who in turn, you hope, will cover up for you.

So, because each of these elements relies on the other three for survival, fraternities will never reform. The members like them just the way are and were, with fond memories of drunken nights and pointless pain. Does any college president have the courage to close them and replaced them with societies that are open, democratic, service oriented and honest?

Show Comments (
3
)
Comments are automatically closed two weeks after an article's initial publication. See our comments policy for more.
Frank Gibbons
5 years 6 months ago
Father Schroth, I agree that fraternities have no place in the undergraduate experience. It is especially sad to see them supported by Jesuit institutions like St. Joseph's University and Loyola of New Orleans. Perhaps you could use your influence with your fellow Jesuits to phase out "Greek Life" at these schools.
Joshua DeCuir
5 years 6 months ago
I have several critical comments/questions in response to the arguments here. First, and only partly in jest, it strikes me that several of the qualities Fr. Schroth lists as problems with fraternities can equally apply to say, an all male religious order. Indeed, several of these qualities were used to supress the Jesuits centuries ago. Secondly, I know of no evidence that the abuses Fr. Schroth mentions ocurr with higher frequency among members of college fraternities as opposed to college students generally. Sexual violence & alcohol abuse as a whole have increased among college students. Can he point to evidence establishing that fraternity members are even more likely to abuse alcohol or engage in sexual violence as compared to college populations? With respect to the "exclusivity" argument, this argument is off-the-mark. Membership in Greek societies has actually exploded nationally, with more students joining & belonging to Greek organizations than ever before. I know first hand here in the South (where Greek membership is probably the highest), almost every major public university has experienced higher recuitment rates than ever. The days of Greek & other secret societies being the domain the truly elite, WASP families in this country are long gone. Finally, would Fr. Schroth include traditionally all-African American fraternities in his disbandment argument?
William Atkinson
5 years 6 months ago
Back in the days when adulthood came at 21 years of age (left over drinking and voting age) folks could say as an excuse "Boy's will be Boy's": "Girl's will be Girl's"; but no longer, Boy's become Men in Uniform at 17, Girls become Moms at much earlier age. To excuse criminal conduct of MEN and WOMEN at 19 to 26 as childish is absolutely wrong. They all are as much adults as MEN and WOMEN, who grow up and become adults at 17, 18. To try and keep fraternities and sororities as places where kids can be children going to school and living like teenager is a joke and the results are kids sponsored by education institutions failing to become adults because of their status as students. It's the institutions cause and effect that continues this age old practice of keeping adults as children while they attend their education institutions, both students and academia need to grow up to the times.