A Closer Look at the New Archbishop of Chicago 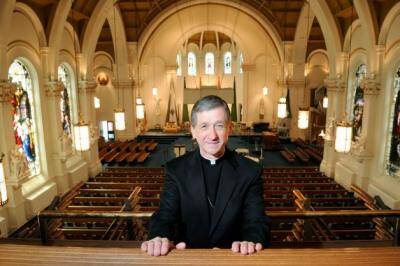 Bishop Cupich reveals what formed him growing up as one of nine children in a Croatian family in Omaha, his vision for the church where people, especially the poor, need help, and his assessment of Pope Francis. He sees the Francis era as a renaissance moment for the church, perhaps, he said, bigger than the Second Vatican Council.

“I think this is a great moment in the life of the church. I think it is as significant, even more so, maybe, than the Second Vatican Council—because he’s taking – the pope is taking – a lot of the insights of the Council and really making it happen,” said Archbishop Cupich. He quotes someone who notes that after the Council St. John Paul II advised what to do, Pope Benedict XVI said why to do it, and Pope Francis, now says “do it.”

From a transcript of the interview, one sees a man who made the meteoric rise from bishop of Spokane, Washington to head of the cardinalatial see of Chicago. The move positions him to become a force nationally and internationally, an amazing accomplishment for a man who apparently was on barely anyone’s list for the appointment and who has never even met Pope Francis.

Archbishop Cupich reflects values learned at home, from a father of nine who developed Parkinson’s disease at age 48 and still took life head-on. He was a mail carrier who still remembered the needs of people even when illness made him leave his job. When Meals on Wheels became a possibility for his community and he volunteered with the St. Vincent De Paul Society, he remembered the isolated, malnourished people he had met on his rural mail route. He pursued the government program for townspeople, only to be stifled by local bureaucracy. The older Cupich’s response? Run for office against those who blocked the program. He won, and today the Meals on Wheels program still is operational.

“So he was an individual who said, ‘There’s a need here. I’m gonna try to do something about it.’ He didn’t wallow in his self-pity because he had Parkinson’s. But he went forward. And there was courage there,” archbishop Cupich said.

The signature example suggests Archbishop Cupich will easily handle any bureaucratic obstruction in the behemoth Chicago and even in the sometimes hidebound U.S. Conference of Catholic Bishops (USCCB), an organization he supports. “It-can’t-be-done” won’t play well with Archbishop Cupich when he proposes solutions to pressing human needs.

Archbishop Cupich, Pope Francis’s first major U.S. appointment, offers a glimpse into the pope’s approach to people. He takes them where they are and shows them respect.

“It’s about how he looks at people. How he sees them. He doesn’t see them as a problem, a challenge, as people who should be judged by whether or not they’re orthodox or not orthodox, whether or not they have sinned or not sinned. But he looks at them with respect that they’re a child of God. That’s where he begins. And that God wants to offer his mercy. People pick up on that. That’s why he is wildly popular. He’s telling people their lives count. And I think that’s created an enormous positive feedback that people are responding to,” Archbishop Cupich said.

He reflects healthy impatience. He looks at immigration and calls for reform. Give a path to citizenship to people and documentation to the undocumented, he says. He is not content to wait for a different political moment. He urges respectful interaction, which may suggest that he’s not happy with the meanness that has moved into national dialogues on issues inside and outside of the church.

“Listen, talk, be respectful of people—and make sure that you have openness to where people are coming from. And you don’t do anything that is unnecessarily antagonistic, that is only going to make you feel good because you’ve done it,” Archbishop Cupich said.

On the forthcoming Synod on the Family in October 2015, which has drawn wariness among some people, he wants consultation with parishes to help bishops provide input into the larger synod on the family next fall. He points out that all the 2014 synod proposals passed with healthy majorities though three proposals lacked the necessary two-thirds majority. In Spokane, he already had brought in speakers to explain to clergy issues highlighted by Cardinal Walter Kasper, who drew fire when he proposed changes, for example, in what he saw as a too slow annulment process, lacking in mercy. There does not seem to be a national effort to prepare for the forthcoming synod, but certainly Chicago will be ready to provide significant input. Unfortunately, Archbishop Cupich was only elected by the U.S. bishops as an alternate delegate to the synod, but Pope Francis could easily adjust that by elevating his status.

Archbishop Cupich’s brings humility and humanness learned young, perhaps when he helped his father in his second job at the part-time janitor at the grade school Archbishop Cupich attended. Today he listens to both those who empty the trash and the business owners he needs to fund the charities of the Chicago Archdiocese.

“There is a great deal of wealth in this country,” Archbishop Cupich said. “And there are a lot of people who are wealthy. And so I have associated with them, too, and have good friends who are really wealthy. But I think maybe the meeting place—with a lot of the folks who have great wealth and means – has been helping the poor through education…. I think that education is a pathway out of poverty, for many people. It was for our family.”

He eschews the grandeur of ecclesial palaces of another day, which were erected by immigrant communities to say "Catholics have arrived." He will live in the rectory of Holy Name Cathedral, not only for witness value but also because it is downtown and gives him access to people in the neighborhood and at the parish Masses. In Spokane he lived in a faculty apartment at a seminary.

Archbishop Cupich will be heard on the national stage as he speaks from the pulpit of Chicago, the third largest diocese in the country, and from the floor of USCCB meetings. At the USCCB he has previously served as a committee chairman, recently as head of the bishops’ Committee on Protection of Children and Young People, where he was effective in monitoring sexual abuse by clergy issues. He recognizes a humbling moment for a once proud church.

Like Pope Francis, Archbishop Cupich appreciates metaphor. The colonnade of St. Peter’s provides “open arms,” he says. “That should be the model, the metaphor for the church.”

There’s no boredom in preaching the Gospel, he says. He compares it to being a basilica tour guide who finds joy every time he sees people visit St. Peter’s for the first time.

“I am never bored in my ministry because I continually see the impact of God in people’s lives,” he said.

He quotes the pope and his comment that the leaders have “to know the smell of the sheep.”

Archbishop Cupich knows the church is people and that’s where his heart lies. He is wary of bishops’ attachment to power and sees it as a flaw.

“I think there’s a conversion that’s needed particularly in the leadership of the church to make sure that they are clear in their own mind that they are not so attached to power or the power structure that has made their life more comfortable or secure. I think this is the key moment—for all of us in the hierarchy—to ask whether or not we are attached,” Archbishop Cupich said.