The Church Encounters the World 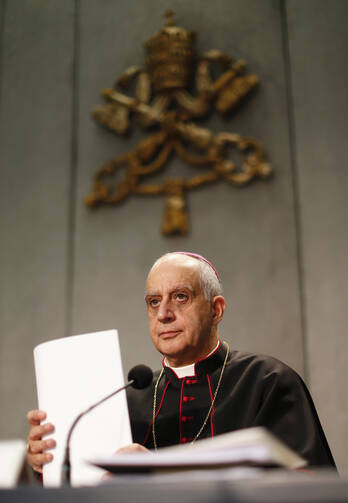 Pope Francis’s apostolic exhortation "Evangelii Gaudium" is so long and so rich I was relieved for the editors' suggestion of a topic. “We need something on the document," the editors wrote, “as a reflection of a post-Vatican II engagement with the world.” Engagement with the world, to be sure: after evangelization, there is no clearer theme in the text than the need to engage the world on every front, in every possible way, whether in the flesh or in the realm of ideas.

“Joy of the Gospel” is fundamentally an embrace of Vatican II in Papa Francesco’s intensely personal pastoral style. He told the bishops long before the publication of this response to last year’s synod on the new evangelization that nothing could be written that would exceed Paul VI’s Evangelii Nuntiandi (1975), a synodal exhortation that is commonly recognized as a post-conciliar document in the ambit of the Council. He quotes from Pope John’s opening address to the Council, and, as my colleague John Borelli points out, Pope Francis cites the two most remarkable passages of that address: rejecting the prophets of doom and distinguishing between the substance of faith and the form in which it is expressed.”

Francis, moreover, revives one of the most important tools for engagement with the world that had been suppressed for the last 30 years: the reading of the Signs of the Times as a task of the whole people of God. What had been resisted by centralizing forces in the Vatican in Pope Paul’s rendition of the Signs of the Times was his wholly conciliar commitment to discernment of the signs as a duty of various communities in the church, especially local ones, rather than the responsibility of the hierarchy or the pope alone.

Along with returning that duty to all the people of God, Francis gives real life to the image of the Church as the People of God, a favorite in the years after the Council that had fallen out of favor as well. For Francis the People of God is the primary image of the Church. He gives it new theological resonance in the mission of evangelization, but also throughout the text demonstrates how practiced is his pastoral sensitivity for people and particularly in a spiritual meditation on “The spiritual saveur of being a people” (nos. 268-274).

A distinctive intellectual contribution toward engagement with the world comes in a set of four axioms related to the common good and peace in society (217-237). One problem that concerned the Council and Paul VI was the risk of division when members of the Church were permitted to follow different options in pursuit of the common good. Their solution was to argue that charity should unity us even if our particular engagements differed. Francis proposes the four axioms as ways to overcome the divisions that arise from diversity and to re-imagine unity. They deserve serious reflection not only as theoretical propositions about unity-in-diversity, but also as the fruit of practical wisdom gained in the pope’s own evangelizing efforts.

The first axiom, Time is greater than space, draws on the Council’s own sense of God working in history and the People of God walking together in hope of final fulfillment in the Kingdom. The first axiom is a counsel to accept our limited achievement in time with hope of their final fulfillment in God. It is, in particular, a kind of wisdom we need when “we are building a people.”

The second axiom, Unity prevails over conflict, addresses the soft underbelly of Catholic Social Teaching, namely, its failure to address the question of conflict or, at least, to move toward premature closure when differences arise. Francis, as the principle suggests, takes the Catholic (Pauline) primacy of charity over division, but only after taking a closer, harder look at the problems we confront. “Solidarity, in its deepest and most challenging sense,” he writes, thus becomes a way of making history in a life setting where conflicts, tensions and oppositions can achieve a diversified and life-giving unity.”

The axiom Realities are more important than ideas is a stake in the ground. It marks the differences between Francis’s pastoral pragmatism and his predecessors’ intellectualism. “It is dangerous,” he writes, “to dwell in the world of words alone, of rhetoric and images.” Ideas can twist and obscure reality. They yield: “angelic forms of purity, dictatorships of relativism, empty rhetoric, objectives more ideal than real, brands of ahistorical fundamentalism, ethical systems bereft of kindness, intellectual discourse bereft of wisdom.”

Reality lives by the principle of incarnation, Francis writes,

The principle of reality, of a word already made flesh and constantly striving to take flesh anew, is essential to evangelization. It helps us to see that the Church’s history is a history of salvation, to be mindful of those saints who inculturated the Gospel in the life of our peoples and to reap the fruits of the Church’s rich bimillennial tradition, without pretending to come up with a system of thought detached from this treasury, as if we wanted to reinvent the Gospel. At the same time, this principle impels us to put the word into practice, to perform works of justice and charity which make that word fruitful.

This, I dare to say, is a truly novel contribution, a genuinely incarnational theology.

The whole is greater than the parts, the fourth axiom, is another take on the question of unity in diversity, but a highly inventive one. Using his own advice that homilists should use images, Francis proposes that instead of thinking of unity as a sphere we ought to think of  unity—in community—as a polyhedron, where the contribution of the diverse parts to the whole are more evident.

Francis wants to bring together the global and the local, but with each part growing in its own way, so we constantly broaden our horizons even as we deepen our local roots. Even the Gospel, Francis argues, follows this rule. It must be preached to people in every culture and condition “until it has been proclaimed to all people, until it has healed and strengthened every aspect of humanity, until it has brought all men and women together at table in God’s kingdom” (179).

“Joy of the Gospel” is a long, unwieldy document, but when I finished reading it, I knew I was encountering an original spirit. A man of insight and learning, but also a whole human being, whose spiritual and pastoral life nourishes his thinking. One passage toward the end of the exhortation summed the richness of Francis’s teaching to me. It is from the passage on “The saveur of the People of God.” The paragraph (271) consists of a chain of quotes, but they show a contemplative appreciation of the Word of God that is the pope’s own that he would have us live as well.

It is true that in our dealings with the world, we are told to give reasons for our hope, but not as an enemy who critiques and condemns. We are told quite clearly: “do so with gentleness and reverence” (1 Pet 3:15) and “if possible, so far as it depends upon you, live peaceably with all” (Rom 12:18). We are also told to overcome “evil with good” (Rom 12:21) and to “work for the good of all” (Gal 6:10). Far from trying to appear better than others, we should “in humility count others better” than ourselves (Phil 2:3). The Lord’s apostles themselves enjoyed “favour with all the people” (Acts 2:47; 4:21, 33; 5:13). Clearly Jesus does not want us to be grandees who look down upon others, but men and women of the people. This is not an idea of the Pope, or one pastoral option among others; they are injunctions contained in the word of God which are so clear, direct and convincing that they need no interpretations which might diminish their power to challenge us. Let us live them sine glossa, without commentaries. By so doing we will know the missionary joy of sharing life with God’s faithful people as we strive to light a fire in the heart of the world.

Drew Christiansen, S.J., the former editor in chief of America, is a visiting scholar at Boston College. In January, he becomes Distinguished Professor of Ethics and Global Human Development at Georgetown University.