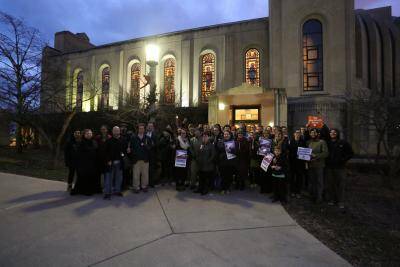 As noted by Kevin Clarke the other day, the National Labor Relations Board counted the votes of Loyola University Chicago’s non-tenured “contingent” faculty and found a solid majority (142 to 82) had chosen union representation. (Trades and maintenance employees voted for membership in the Operating Engineers on the same day by an even more lopsided 17-6.)

The university administration had made no secret of its opposition to the faculty union, campaigning vocally for a NO vote. But happily, the university seems intent on honoring the instructors’ decision—and the principles of Catholic social teaching—by following the path of hundreds of other Catholic institutions and negotiating a mutually beneficial collective bargaining agreement. “We look forward to continuing the conversation and the negotiations with SEIU about these faculty in the coming year,” the university website announced.

Many of us had feared that Loyola would join its Chicago neighbor Saint Xavier University. SXU is defying basic Catholic teaching on the rights of labor by refusing to bargain with the union selected by the faculty—and courting scandal by invoking its religious identity to deny its faculty legal remedy. SXU and a handful of other colleges have advanced questionable claims that respecting "Rerum Novarum" would somehow obstruct their religious mission, claims that sounds increasingly hollow as schools such as Georgetown University and St. Michael’s College secure uncontroversial contracts. The Catholic Colleges choosing the path of massive resistance may imagine heated contract battles over the Nicene Creed or the Real Presence, but these are not topics of collective bargaining. The reality is more prosaic, with adjuncts asking for a modest $300 payment if the course they have spent many hours preparing to teach is canceled at the last moment for insufficient enrollment.

Chicago, it seems, is living up to its reputation as a labor town lately—at least if you are at a Catholic institution of higher education. Elsewhere at Loyola University Chicago food service workers are in tough contract battle with Aramark, the vendor that staffs campus cafeterias. Meanwhile DePaul adjuncts, witnessing events at Loyola and SXU, are forming a committee to seek union representation of their own. We can hope that a cordial and positive round of bargaining at Loyola will give both these efforts a boost.

Clayton Sinyai
Show Comments (
1
)
Comments are automatically closed two weeks after an article's initial publication. See our comments policy for more.
William deHaas
6 years 10 months ago
From a very reliable witness at Loyola - there are two issues going on here: a) Aramark workers vs. union wages b) adjunt professors FYI - four student leaders were suspended last semester after violating Loyola campus protest rules. These four plus the university were also sued by the local cafeteria supervisor who was harassed by this protest. (what the ill informed student leaders didn't understand was that the local supervisor was in the same position as the rest of the cafeteria workers - yet, the leaders taunted and yelled at the supervisor threatening him, etc.) Adjunt professors - the posted response from the university talks about how 1st and 2nd year student classes are majority taught by PhD tenured professors. But, this skews the facts. Those classes have huge enrollment and grading, lectures, etc. are often done by the PhD's teaching assistants. So, on the face of it, it looks like Loyola is using PhDs primarily but, in reality, this hides the fact that adjunt professors are used for the majority of classes and that, if you used professor to class ratios, adjuncts would be way ahead of Phd tenured staff. Let's see if the Vincentians can do a better job than the Jesuits in Chicago - no mention of DePaul maintenance, cafeteriea staff and union wages?