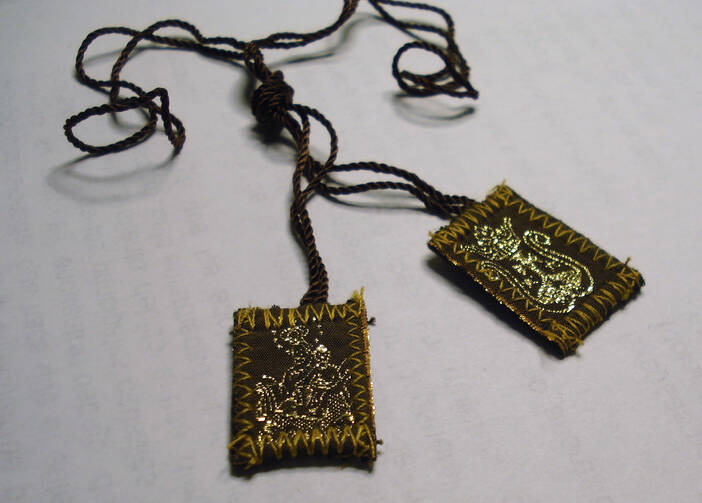 My grandmother wore one. My lovely bride wears one. I carry one in my shirt pocket. Once they were almost ubiquitous in the Catholic world, so common that I would see them peeking from the necks of aunts and uncles, dangling from the necks of men changing their shirts in sacristies and locker rooms, draped on the chests of men and women in their gleaming coffins at their wakes and vigils and viewings. But now even the word “scapular” is a rare sighting, let alone the lovely gentle honest thing itself; so let us spend a moment celebrating and honoring the scapular, a small subtle savory spiritual whisper that moves me whenever I encounter it.

Probably they trace their history to monastic robes—many monks and nuns to this day wear a front-and-back cloth, something like a narrow poncho, called a monastic scapular. Cistercian friends of mine wear them regularly, and often use them as de-facto aprons in their work in the book-bindery, the kitchen and the carpentry shop of their abbey. The much smaller scapular that laypeople wear—essentially two stamp-sized squares, usually of cloth, attached by strings, and worn such that you carry a square on your chest and on your back—probably began as a gesture of affiliation with a monastery, abbey or order; while you yourself were not, for example, a Trappist monk, you admired the graceful men who were, and you wore a token of that esteem, as an act of witness and of prayer. In general scapulars come in one of five colors, each associated with a particular devotion or saint; my wife carries Our Lady of Mount Carmel with her every day, because she and Our Lady are close confidants, being mothers and women of grace and courage. I take a special pleasure in seeing this particular scapular here and there, in the rare moments when it does not adorn the woman who married me, for I like the fact that Mount Carmel, in Israel, is called “God’s Vineyard” in Hebrew, and is a holy place for the Baha’i, Jewish and Muslim faiths as well as for the Christian faith; indeed it is thought to have been a sacred place long before any of those religions existed, which cheers me up, for it reminds me that holiness is bigger than any religion, and that what is sacred cannot be owned or controlled or claimed by any one religion or people or sect or species.

There is holiness, bigger than even our capacious imaginations can reach, and then there are countless religions and faiths and traditions, each striving, at its best, to witness and celebrate and honor the gift of holiness in this world; and one way that religions witness and celebrate and honor the sacred is with the humble gestures of cloth and metal and wood, glass and stone and shell, paper and smoke, water and wine. The little tactile things that we do and wear and touch, the rosary beads and medals engraved with the faces of the saintly, the chalice and the host, the missal and the ashes, the crucifix and the cross, the mantilla and the scapular…how easy to sneer at them as devotional mania or simple-minded superstition, but how anciently and deeply human and humble to see them as things we can daily touch and see and smell, to remind us of that which is far beyond our poor dim senses.

We can, if our eyes be open and our minds clear, see and hear and touch the evidence of holiness everywhere, flung with the most amazing profusion, babies and bears, trees and tenderness, water and laughter, forgiveness and mercy, the very air we breathe, the very lungs with which we breathe it; we can, in short, see the fingerprints, and hear the echo, and trace the spoor, the trail, the signs; and then, with something like awe, we can finger such prosaic things as rosaries and scapulars, and so silently speak and sing and shout our gratitude; and then you slip your scapular gently back into your shirt, and proceed into the next holy hour granted you by a most generous and profligate and incomprehensible Love.

Brian Doyle is the editor of Portland Magazine at the University of Portland and the author, most recently, of So Very Much the Best of Us (ACTA).