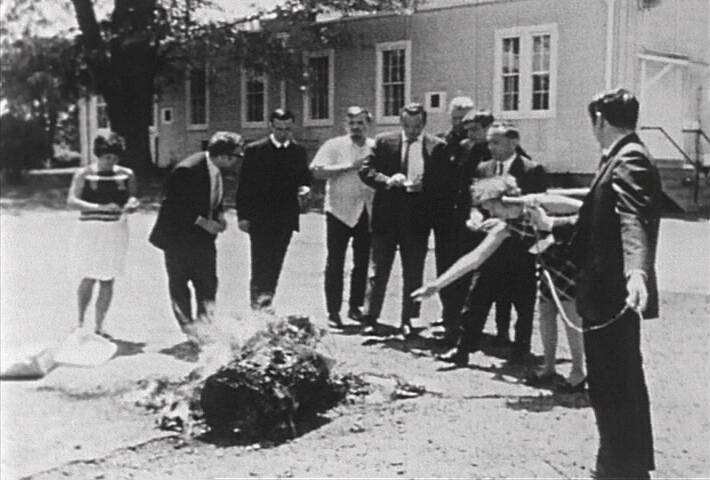 Unwilling to live with the horror of burning children, a consequence of U.S. napalm bombings in Vietnam, a group of Catholic peace activists decided to make a bold attempt to end the war—or at least slow down its buildup. On May 17, 1968, two women and seven men, including two priests (Dan and Phil Berrigan), entered the Selective Service Office in Catonsville, Md., seized nearly 400 1-A draft files and burned them in a nearby parking lot with homemade napalm. Martin Sheen has called the action “arguably the single most powerful antiwar act in American history.”

“But,” as Jake Olzen writes today at Waging Nonviolence, “the iconic images and audio from that historic event were almost lost in the annals of history.”

Pat McGrath, a reporter for the NBC-TV affiliate in Baltimore at that time, captured the original footage. He had learned about the protest ahead of time and was stationed in the parking lot as the activists carried the draft files outside and lit them on fire. The station’s general manager, however, fearing consequences from the Federal Communications Commission, decided not to air the clip. Within 24 hours of the action, the federal government confiscated the film reel and pressured McGrath to reveal his source. He refused, and nearly lost his job in the process. Olzen tells the story of how McGrath recovered the film footage and turned it over to activists so it could be preserved.

Today marks the 45th anniversary of the Catonsville action, and it is the first time the original video footage—in its entirety—has been digitalized and made available for public view. To watch the video and read the story about how it survived for 45 years, visit WagingNonviolence.org.

See Claire Schaeffer-Duffy’s review, published in the Nov. 12, 2012, issue of America, of The Catonsville Nine: A Story of Faith and Resistance in the Vietnam Era, by Shawn Francis Peters (Oxford, 2012).

Luke Hansen
hansen@americamagazine.org
Show Comments (
2
)
Comments are automatically closed two weeks after an article's initial publication. See our comments policy for more.
Beth Cioffoletti
9 years 8 months ago
This is the act that inspired me before I was even 18 years old. Wonderful to see the footage. Been following the Berrigans ever since.
ed gleason
9 years 8 months ago
yes, they inspired a generation.. some of us paddies can take pride that the police said "get in the paddy wagon' may we all always be ready to get in.