Catholics and Climate Divestment: An Update 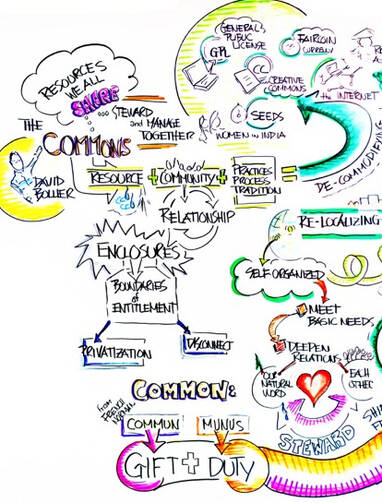 We may be learning to see, and to value, our commons again.

In my last print column for America, I wrote about the intersection between Catholic tradition and the notion of the commons—a kind of economy in which shared treasures are governed by those who depend on them, not by a state or market. Since then, I had the chance to attend “Building the Collaborative Commons,” at the Omega Institute in New York’s Hudson Valley, where more than 500 people participated in the largest U.S. meeting on the commons in recent memory. This was a major event. I wrote about its significance for Al Jazeera America.

You guessed it; “Omega” is a reference to the work of the French Jesuit philosopher Pierre Teilhard de Chardin. The Omega Institute is not a Catholic organization—it was founded on the teachings of a Sufi meditation teacher—but like many Catholics its leaders appreciate the vital intersections of spirituality, a vibrant commons and environmental stewardship. The Omega Center for Sustainable Living, for instance, is one of the “greenest” modern buildings in the world. It treats the wastewater from throughout the Omega campus with just the plants and bacteria that live in its several cascading wetlands.

One of the highlights of the conference was a talk by Bill McKibben—once the author of the first book on climate change, now one of the leading climate activists in the world. (He also reads his Bible.) Mr. McKibben talked about his efforts to organize campaigns among university students and religious communities across the country to pressure their institutions to divest from the fossil fuel companies that are doing the most to make the planet that we all hold in common less inhabitable. He celebrated this summer’s divestment by the World Council of Churches (of which the Catholic Church is not a part), and it piqued my curiosity about how we Catholics are doing on that front. The progress is pretty lackluster, as it is for colleges around the country. Here are some recent milestones:

Pope Francis, who is reportedly working on an encyclical on the environment, follows his predecessor in speaking of environmental destruction as a sin. He has evoked the ancient logic of the commons when he said, “Creation is not a property, which we can rule over at will; or, even less, is the property of only a few: Creation is a gift, it is a wonderful gift that God has given us, so that we care for it and we use it for the benefit of all, always with great respect and gratitude.”

If we are called to be good stewards of what we cannot own, surely we should also be of our own wealth.