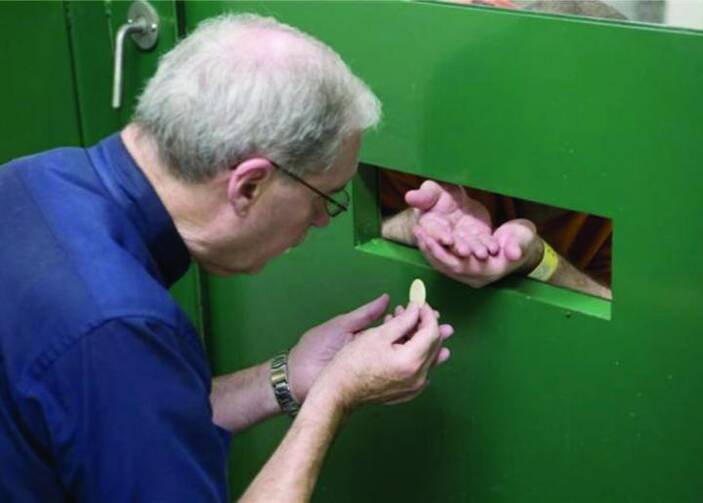 Five years ago I wrote a Lenten meditation, "Jesus the Prisoner," (America, March 30-April 6, 2009). I was interested in the theme because I was then reading a book written by Michael Kennedy S.J., Jesus the Risen Prisoner: An Invitation to Freedom. I was taken by how rarely we ever hear of Jesus as being referred to as a prisoner.

This Christmas Kennedy sent me a more recent book, Within These Walls, in which he reflects on his own experiences in prison ministry—its difficulties; frustrations when there are lock-downs; difficulties in hearing confessions of prisoners in solitary confinement. It made me try to think more about prison ministry: what is being done, what still needs doing, what might ordinary people in parishes do for ministry to prisoners?

To be sure, when we think of crime and criminal justice, we need to think about more than just prisoners. We need to attend to victims and their healing; we need to consider the impact of crime on communities. Catholics affirm that human dignity still accrues to prisoners. They have rights but also responsbilities for their crimes. Thus, I was led to read a truly remarkable pastoral of the American bishops, released in 2000: Responsibility, Rehabilitation and Restoration: A Catholic Perspective on Criminal Justice. I highly recommend a reading of that thoughtful pastoral, found online. The bishops note that restorative justice must attend to the voices of victims. They interviewed parents of offenders, victims, prosecutors, prison wardens and prison chaplains. They assert strongly that the status quo is not working. The current trend is toward more prisons (often in remote locations, which makes visiting the prison or getting adequate resources for ministry to prisoners more difficult). The bishops note that many prisons have too little of education and drug treatment programs and, often, very little support when prisoners are released. In 2000, according to the bishops, 30 percent of prisoners in state prisons were baptized Catholics. Over half a million children had a parent in jail. America's prison population is six to twelve times higher per capita than that found in other western countries. The bishops oppose capital punishment and the privatization of prisons into the hands of for-profit, non-state, agencies.

George Williams, S.J., chaplain at California's San Quentin prison said the following: "Since the late 1970s penology in the United States has steadily turned from hope in the power of rehabilitation and reform and has instead embraced an ideology of incapacitation and revenge. In the face of such indifference to the plight of the incarcerated (and their families), Catholic prison ministry is needed more than ever!" In the company of Sister Helen Prejean, nine California bishops visited San Quentin in October, 2013. They also talked to inmates who stressed the need for better re-entry programs and also preventative programs for teenagers. Many of inmates now serving long sentences began their crime careers as teenagers.

Another resource for thinking about prison ministry can be found in a 2012 Pew Forum Survey of 730 of the 1,474 paid prison chaplains in U.S. state prisons. Seventy-one percent of them are Protestant, 44 percent evangelical Protestant. Two-thirds of the chaplains were satisfied with their jobs. They noted a fair amount of religious switching in jails. When asked about different groups, the highest percent thought Catholics were shrinking in numbers (although 75 percent thought Catholics remained the same). Only 33 percent said they followed up on released prisoners.

There are lacunae in coverage. In 2012, 166 Catholic prisoners in state prison in Solano, California appealed to get a chaplain which they had been lacking. Some of the data on Catholic prison ministry can be found from the American Catholic Correctional Chaplains' Association. Others can be found by going online, looking for Catholic Prison Ministry in ( e.g., Des Moines, Arlington, Los Angeles etc.). I noted that the web page about Catholic prison ministry in Arlington, Virginia remarked that of the 23 jail and prison facilities in the diocese, only 13 receive regular vists by Catholic volunteers. Of those 13, five facilities have regular masses and enjoy the presence of a chaplain once a week.

Volunteers outside the facilities can: (1) Organize individuals and small groups to pray daily for the prisoners, the volunteers and their ministry, the chaplains and correctional officers. (2) Join legislative advocacy networks for rights of prisoners. (3) Create a parish-based aftercare team. (4) Assist ex-offenders in their transition to the community through mentoring and support circles. (5) Write letters to individuals who are in prison for life or for long sentences and those on death row. (6) Join vigils when executions take place. (7) Collect greeting cards and other supplies for inmates; (8) Assist families of victims (or offenders) they know in their parishes.

One important assistance to families is the Get On The Bus program. My parish participates in this. There are 856,000 American children who have a parent in jail. In 60 percent of the cases the jail is located more than 100 miles from where they live. Often they are in the care of grandparents who can not easily drive so far. Fifty-six percent of mothers and 57 percent of fathers in prison claim they never see their children. Get On The Bus arranges to take children by bus to the prison facility where  they can have a four hour visit with their parent. Evidence suggests that continued contact with a parent in jail increases both the likelihood that the child will not get into crime and that the parent is more likely not to become recidivist after their release.

Much really needs to be done if we would hear that injunction of Jesus: "I was in prison and you visited me." Michael Kennedy S.J. had a number of  juvenile offenders write Pope Francis during holy week. The letters were quite moving. Two stood out for me. "Dear Pope Francis, tonight we pray for all the victims of violence. The families of people we hurt need healing. Our families need healing. We are all in pain. Let us feel Jesus' healing tonight."  Another told the pope: "I read that the harshest sentence that a youth can receive in Italy is twenty years. I wish this was true here. I am glad to be a Catholic because we have a pope like you. We need examples of God like you in this violent world." As The Letter to the Hebrews reminds us: "Be mindful of prisoners, as if sharing their imprisonment." In one sense we all do share it!

John A. Coleman
Show Comments (
1
)
Comments are automatically closed two weeks after an article's initial publication. See our comments policy for more.
David Newman
8 years 9 months ago
I am so very thankful for the effort to bring Christ to those behind bars as I myself spent close to twenty years there. It was hard to find Catholics to spend time with and many others did not see 'Us" as Christians however I did manage to make some friends that saw I was doing all I could to live for the Lord. I even managed to write a "book" that spoke of addiction, sexual abuse, and many other hard subjects it turns out this story has helped many by God's grace. http://www.amazon.com/Heart-Matter-Confession-David-Newman-ebook/dp/B00GSVJVC8/ref=sr_1_1?ie=UTF8&qid=1385052634&sr=8-1&keywords=the+heart+of+the+matter+a+confession I pray it will continue to help those like myself. I also pray for open dialog in the Church so we can all heal from the thing's that have transpired. May God continue to bless all your efforts, To Him be all the Glory