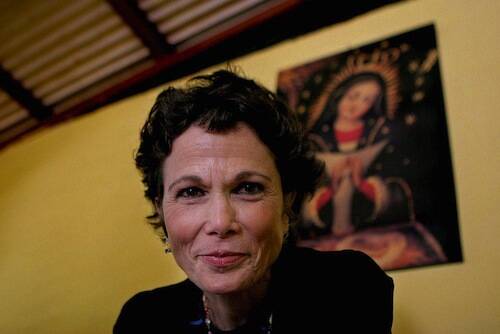 The “Future of the Catholic Literary Imagination,” the conference organized by the Institute for Advanced Catholic Studies and held on the campus of U.S.C., was lovely for many reasons. For one, I have read nearly all the stories of Tobias Wolff (“Hunters in the Snow,” “The Rich Brother,” “In the Garden...”) over and over for years. He virtually taught me to write. Seeing him speak and read was almost surreal.

In his presentation in the university chapel, Wolff read an essay in which he discussed the absolute, damn-the-torpedoes Christian certainty of an evangelist and Jesuit martyr Jean de Brebeuf.

In a way, Wolff said, he was envious of this attitude. It runs absolutely counter to a contemporary mindset in which everyone’s ideas must be respected and the truth can be found virtually anywhere—like a disastrous interpretation of the Ignatian motto “God is in all things.”

“If all things are true then what particular thing is worth living for and worth dying for?” asked Wolff.

He also pointed out that, though brave and heroic, Brebeuf was a horrendous evangelist. He was rejected again and again by the Hurons he worked with. He was manipulative, hectoring, scornful, hypocritical and utterly cruel in the service of this certainty—of his need to save souls.” Yes, Brebeuf never doubted or feared as he went to his tortuous and horrific death at the hands of the Iroquois. But Wolff asks us to compare this with the moments before Jesus’ own death.

The savior of mankind was unmistakably human when he asked God to take this cup of suffering away from him if it was God’s will. Brebeuf’s certainty about everything he did (and everything he was subjected to) was like a dark cloud that seemed to cover up his humanity.

It is one thing to be floating in a sea of secularism, relativism and paralyzing uncertainty. It is another to feel doubt, fear and distress. “Jesus’ doubts are blessings,” concluded Wolff. “They pardon us for ours. I’d be lost without them.”

At one point during the conference I saw Mr. Wolff sitting with his wife, Catherine, just the two of them, in the back of a lecture hall. It was my chance. I wanted to speak with him, the author of “Hunters in the Snow.” But I was afraid. Surely I would be one of thousands of suburban boys who have wanted to speak to Tobias Wolff; boys who have never hunted, let alone in the snow, and yet felt they were becoming men, indeed self-indulgent and morally-bankrupt men trekking with rifles through a bleak wintry landscape, simply by reading this near-perfect short story.

Later I was told Tobias Wolff is very, very nice.

Wonderful also was the acclaimed novelist and poet Julia Alvarez (How the Garcia Girls Lost Their Accents, The Woman I Kept to Myself, In the Time of the Butterflies. This last one was taught at Red Cloud Indian School when I worked there several years ago.)

In the opening keynote, Alvarez told us that when she was first invited, she wondered if she even belonged at this conference. She went to church, but not a Catholic one. She would not describe herself as a Catholic writer.

Reading back over her work made her realize, with some emotion, how deeply embedded her Catholic upbringing was. Her Catholicism flowed through her writing, she said. It was everywhere. Alvarez told us she was moved to tears in reading Goia’s essay about the Catholic writer. It made her feel like she was “invited home.”

Ms. Alvarez had on silver glasses, her black hair was drawn into a bun. She had bright eyes and sharp features but with a soft face, if that makes any sense. She wore a lovely black dress patterned with turquoise and purple flowers. Of course, she was the kind of woman who could have been wearing a powder-blue McNeese State sweatshirt and I would have found it lovely. (I suppose out of justice I should describe what the guys at the conference wore: the guys at the conference wore blazers.)

Alvarez was sweet, humble, down to earth. She spoke to us as if it were her first time being invited to read aloud before an audience and was sheepish and delighted just to be there. She could get away with saying very smart, literary things with no hint of pretension. (“I always think of myself as a bead in the necklace of the generations.” “Poetry is like the scout that goes out and disappears into the horizon.”)

Because it came from Ms. Alvarez, I was grateful to hear my own religious order mentioned positively in one of her anecdotes. Dana Gioia asked her about starting up the grassroots, populist Alta Gracia coffee company in the Dominican Republic. Wasn’t there a Jesuit or two behind it? “Isn't there a Jesuit or two behind everything?” she said, laughing, but in earnest. Ms. Alvarez went on to talk about a priest who for decades had lived, worked and agitated in solidarity with Dominicans who had little money and less political power. (Hearing about Jesuits like this always calls me out to raise my own game.)

During her keynote, Ms. Alvarez provided one of the most succinct descriptions of what the conference was intended to be about. “This is a big faith,” she said. “Part of what can keep it alive is the constant reinvention and breaking apart, because the spirit is bigger than our containers for it.”