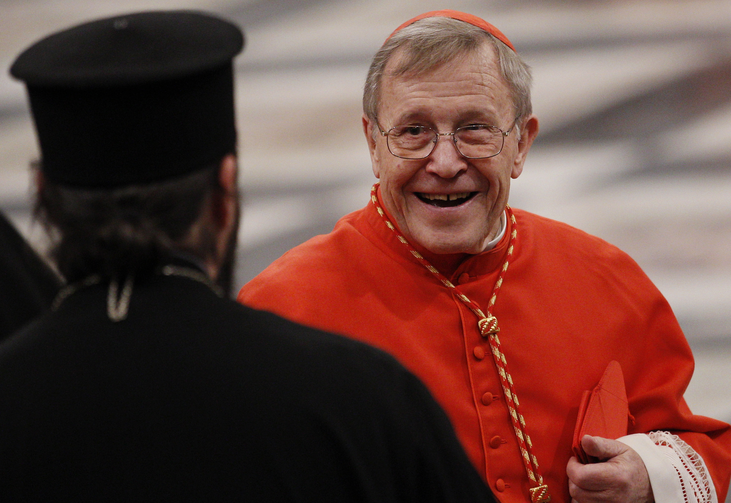 The President Emeritus of the Pontifical Council for Promoting Christian Unity offered new hope for the unity of Christians in the 21st century. Quoting Isaiah 43, “Behold, I do something new,” the cardinal explained, traditional ecumenism is being transformed by the rise of the Evangelical and Pentecostal churches. Compared to the Catholic, Orthodox and Protestant churches, these churches are mostly non-dogmatic and less institutionalized expressions of the Gospel.

These younger, growing churches are more emotional in their worship styles and more voluntarist in their organization. Their members don’t so much belong to a church, as members of the older churches do, but choose their churches. In that respect they represent a contemporary social development in which religious identities are more transitory and church boundaries more porous.

The rise of the Evangelicals and Pentecostals, the cardinal said, constitutes a fourth stage in the history of the churches. The first was the divergence of the Oriental  churches from the Mediterranean churches (Greek and Latin) after the Councils of Nicea and Chalcedon. These ancient churches of the Middle East, which lay beyond the bounds of the Roman Empire, never accepted the doctrines of the great councils, and so are sometimes called Non-Chalcedonian.

The second phase was the break of the Orthodox East from the Latin West in the Great Schism in 1054. The third was the Protestant Reformation of the 16th century, which split Western Christianity into Protestant and Catholic branches.

In two years, 2017, the churches will “commemorate” the 500th anniversary of the Reformation, but the meaning of that anniversary for Christian ecumenism is uncertain, with a number of participants in small group presentations posing questions about its function and significance.

The 1999 Joint Declaration of the Lutheran World Federation and the Catholic Church on Justification overcame the principal doctrinal controversy between Catholics and Lutherans; and the two bodies are expected to carry out some kind of joint observance. Others, particularly some in the Reformed (Calvinist) Tradition, are less certain.

One point of agreement seems to be the ancient formula “ecclesia semper reformanda”—“the church must always be reforming (itself)—sets an agenda for all the churches. Cardinal Kasper in his address added a new twist to Catholic thinking on this question. In the recent past, official pronouncements made a distinction between the sins of “the sons and daughters of the church” and the holiness of the (institutional) church. Kasper proposed we must move beyond that distinction to acknowledge “structures of sin in the church,” implying a need to scrutinize church structures and reform them, just as people examine their own lives and convert from sinful ways.

Cardinal Kasper’s address was followed by a liturgy built around an ecumenical service of the Word conducted led by Pope Paul VI at the Basilica of Saint Paul Outside the Walls on December 4, 1965 to mark the conclusion of the Vatican II. It was the first time any pope had taken part in an ecumenical worship service.

This weekend’s liturgy was led by the staff and choir of Washington National Cathedral (Episcopal), one of the conference’s co-sponsors. Prayers of thanksgiving and petition were drawn from Anglican, Reformed and Lutheran prayer books; readings were taken from the documents of Vatican II.

Drew Christiansen, S. J., former editor of America, is Distinguished Professor of Ethics and Global Development at Georgetown University. He is a member of the National Council of Synagogues—United States Catholic Conference of Catholic Bishops dialogue and of the United Methodist—USCCB dialogue.