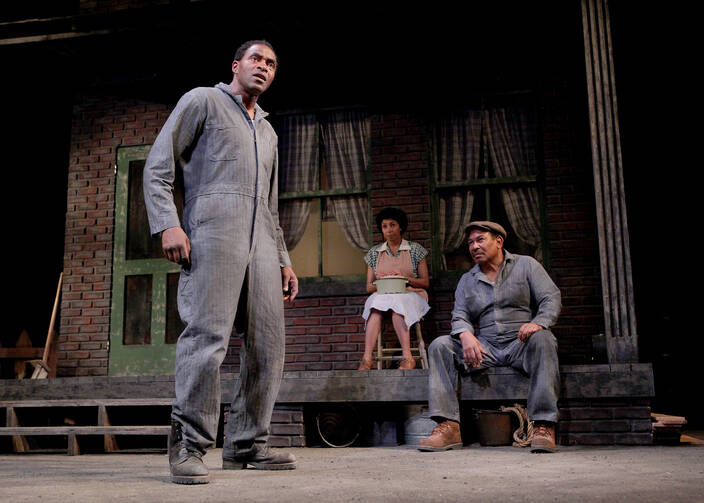 I have been mulling over the dialogue in Robert Frost's classic poem, “Mending.” In it, a neighbor of the narrator of the poem is shoring up a broken wall. His motto rings out: "Good fences make good neighbors." But the poem's narrator has his doubts. "Something there is that doesn't love a wall. Before I built a wall I'd ask to know what I was walling in or walling out and to whom I was like to give offence."

My meditating over the Frost poem came from seeing an outstanding production of August Wilson's Pulitzer and two-time Tony winning play, Fences, at the Marin Theatre Company last week. Wilson wrote, in 10 plays, a decade by decade exploration of the black experience in 20th-century America. “Fences,” which premiered in 1985, went on to a long Broadway run and revivals. It is set in Wilson’s home town of Pittsburgh in 1957.

The title comes from the decision of the play's protagonist, Troy Maxson, ably played by actor Carl Lumbly, to encircle his house with a fence. His buddy, Bono, notes that there is ambiguity in any fence. Who or what is it that we are fencing out and/or who and what are we trying to fence in? Fences are not always friendly to outsiders or to those who feel themselves boxed in by them. Troy tries to fence out memories of his stern and over-demanding father who forced him to do back-breaking work on a cotton farm from which Troy escaped in his early teens. That father, however, paradoxically continued dutifully to raise and care for his eleven children, even when their mother ran away and abandoned them. Troy, as a father, is also stern and over-demanding toward his son, Cory. He feels himself fenced in by his dutiful work and responsibilities to his wife and son and breaks out of it by having an affair with a woman who bears him a child. The sins of the father get passed on to the son.

Troy is also trying to fence out bad memories of becoming a thief and spending time in jail. Yet, paradoxically, he battens off of his psychotic brother's money to buy his house. Again, when Troy eventually gets the house fenced in, his long time buddy and co-worker Bono refuses to pass the fence and enter the house. Similarly, his son, Cory, also begrudges his father's belittling of him and refusal to allow him to take a college scholarship to play football. Cory complains that his father would not allow him to surpass his own skills as a ball player and to achieve what the father had not been able to.

After serving time in prison, Troy played for a Negro league baseball team where he was a star athlete. He was too old to get into major league baseball when the color line was broken by Jackie Robinson in 1947. Troy felt he had been fenced out of major league baseball by the chance of time. Indeed, “Fences” takes place at a time when longstanding boundaries that provided identities in Pittsburgh are eroding. The Hill, a section of Pittsburgh that represented a kind of mecca for black culture and business, was being destroyed in the mid 1950's. Pittsburgh chose it as a place to build a new Civic Arena in 1956, displacing 8,000 black residents in the period between 1956 and 1961. The rebuilding project displaced much of the Hill's vibrancy.

In the same way, the Negro National League (Pittsburgh was home to two black professional baseball teams), which had flourished for some time, began to fall apart after Jackie Robinson broke the color ban in Major League Baseball. Most of the Negro League's best players had left to play on integrated teams or had grown too old to be considered by major league scouts. Black fans turned their attention to their favorite players on integrated teams. The Negro League underwent a devastating decline in attendance. It shut down entirely in 1962.

Troy is neither a true hero nor, for that matter, an out and out villain. He could ooze considerable charm to his wife and friends (although none went his son's way). Hemmed in by his past, the circumstances of racial segregation and the difficulty for blacks to attain upward mobility in jobs, he fixates throughout on baseball imagery. His loving wife, Rose, is taken aback by Troy's infidelity, but in time agrees to love and raise his bastard daughter when Troy's mistress dies in childbirth. In time she also forgives Troy and tries to urge her son Cory to do the same. As she tells Cory, using a favorite baseball analogy of Troy's: "You have to take the crooked with the straight."

When leaving the theater, I talked with my companion about our own fathers, their virtues and flaws. I mentioned that as I grew up I discovered that I had inherited many of my father's shadow sides but missed out on his charm and wonderful wit. In many ways, although I had tried to fence him out, he found ways to break my barriers and give me traits I did not much like. Because my father was an Irish immigrant, I have often thought of the conflicts between Irish fathers and sons over land. My father did not much like his own father, left behind in Ireland. He resisted all attempts by his father to get him to return to Ireland to take over the sheep farm. Once again, paradoxically, while my father, the last son still home, fled Ireland as not to have to run a sheep farm, in his retirement he kept sheep in his country home. What he had fenced out found a way to snuggle back in. I was buoyed by that remark: "You have to take the crooked with the straight."

Having seen this excellent production and been deeply moved by it, I also was reminded that I saw it during Holy Week. Just when we think we have been fenced in or out, we are reminded that the risen Jesus breaks barriers. No wall could contain him in the tomb. In the light of Easter, even the crooked can be made straight. As Isaiah prophesied about the Messiah: "I will turn darkness into light before them and make crooked ways straight."