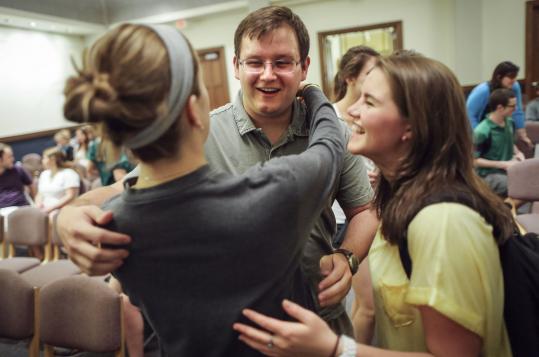 Here's a lovely piece in The Boston Globe about Dan Kennedy, a bright young man just graduated from Boston College, who is entering the Jesuit novitiate this summer.  The profile gets pretty much everything right about its topic and avoids all the linguistic pitfalls that bedevil most pieces about religious life (including the the most common: confusing a "novice" with a "novitiate," conflating the end of formation with ordination, and trading in cheesy puns).  Most of all, it's an inspiring look at an inspiring young man, as, in my opinion, are all the young Jesuits in formation.

Winners of the Finnegan, given to the student who best exemplifies the BC motto, “ever to excel,’’ tend to go big - top grad schools, Wall Street, overseas fellowships. Kennedy is planning to give away his computer, recycle his Blackberry, and move to a modest communal house in St. Paul, Minn.

He will get $75 a month for incidentals. He will have no romantic relationships. He will go where his superiors ask him to go, and do what they ask him to do. If all goes well, Kennedy - “Dan-o’’ to his friends - can hope to be ordained a Jesuit priest in 2023.

Entering a religious order straight out of college is rare these days, particularly for a standout student at an elite school. One or two graduating BC seniors enter seminary each year, but never in recent memory has a Finnegan winner done so.

“Um, I could never see Dan-o on Wall Street,’’ Shannon Griesser, a junior, said, laughing. “I’ve never met such a kind human being, to the core.’’

James Martin, S.J.
@jamesmartinsj
Show Comments (
5
)
Comments are automatically closed two weeks after an article's initial publication. See our comments policy for more.
Thomas Piatak
10 years 8 months ago
Thanks for posting this very nice story, Father.
Thomas Rooney OFS
10 years 8 months ago
What an inspiring article about a truly remarkable young man!  God speed, Dan Kennedy NSJ!
MICHAEL WARNER
10 years 8 months ago
It was a great pleasure teaching and serving in Guatemala with Dan his junior year of high school at St. John's Jesuit in Toledo, OH. Even then, students only half-jokingly would frequently ask themselves: WWDD? "What would Dan-o Do?"
C Walter Mattingly
10 years 8 months ago
Congratulations to Dan Kennedy and his dedication to follow in Finnegan's wake.
David Pasinski
10 years 8 months ago
Blessings to all.. and especially him in having to live with this profiling!
Whatever way his path lead, I hope that he will
find the freedom in the Spirit to follow...and to choose well.
Never easy to be "the star."