Blame it on Rio? 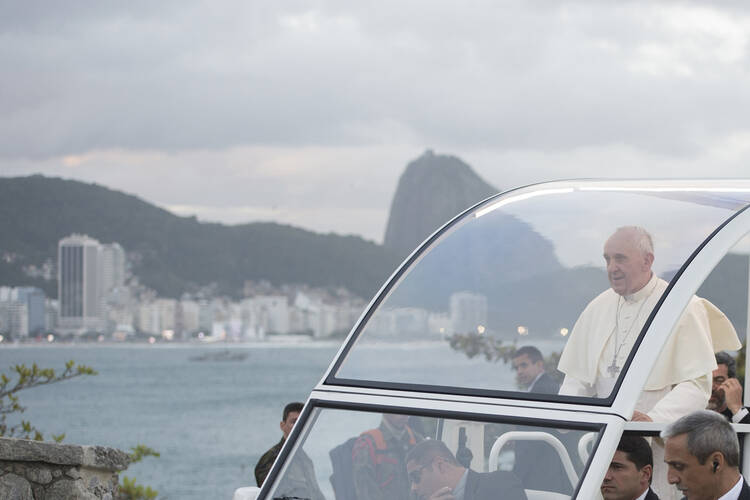 Francis may be the pope who launched a thousand spit takes after an unfiltered press conference on the plane ride home from Rio de Janeiro and World Youth Day this morning. In a wide-ranging discussion of apparently everything, Francis may have become the first pope in history to offer a "who am I to judge" response to a question about gay and lesbian people, scolded one cleric caught up in a financial scandal and defended another caught up in a personal scandal after reporters went "searching for the sins—of one's youth, for example—for publicity."

Pope Francis had made headlines just a few weeks ago when he aknowledged the existence of a "gay lobby" (a lot may have been lost in translation) at the Vatican during what he believed was a private conversation. Today he was returned to the matter by the questioning of reporters. Addressing that issue, Pope Francis said it was important to "distinguish between a person who is gay and someone who makes a gay lobby," he said. "A gay lobby isn't good."

"A gay person who is seeking God, who is of good will—well, who am I to judge him?" the pope said. "The Catechism of the Catholic Church explains this very well. It says one must not marginalize these persons, they must be integrated into society. The problem isn't this [homosexual] orientation—we must be like brothers and sisters. The problem is something else, the problem is lobbying either for this orientation or a political lobby or a Masonic lobby." HIs words certainly signal a shift in tone from Rome on gay and lesbians; will they also mean a change in current policies regarding, for instance, gay men in the priesthood?

Francis was also asked why he did not spend much time speaking about abortion or gay marriage during his trip (church teaching is already clear, he said) and about the difficulties of divorced and remarried Catholics. "I believe this is a time of mercy, a change of epoch," the pope said. He said the group of eight cardinals tasked with reform will explore the issue of whether divorcees can receive Communion.

CNS coverage of the press conference follows below. More here and here and don't miss John Thavis's take on "the pope who likes to shake things up."

ABOARD THE PAPAL FLIGHT FROM BRAZIL (CNS) --Pope Francis said he was responding to the clear wishes of the College of Cardinals when he set up commissions to study the Vatican bank, Vatican financial and administrative procedures and the reform of the Roman Curia.

The pope also said he knows people have spoken about some kind of "gay lobby" at the Vatican protecting certain priests by threatening to blackmail others. The pope said the "lobbying" is what is worrisome.

Pope Francis held his first news conference July 28, shortly after the Alitalia flight taking him back to Rome departed from Rio de Janeiro. He answered questions from 21 journalists over a period of 80 minutes. The questions were not submitted in advance and no topics were ruled out of bounds.

Asked about the Vatican bank, Pope Francis said he does not know what will become of the Institute for the Works of Religion, which is the formal name of the scandal-plagued bank. He has appointed an outside commission and is involved in discussions about how to organize it, "how to restore it, reformulate it."

But he also told journalists traveling with him that "transparency and honesty" were essential at the Vatican bank and that while moral failures by clergy caused scandal and pain, people also needed to recognize that sometimes the media and the public go searching for scandal.

"Whatever it ends up being -- whether a bank or a charitable fund -- transparency and honesty are essential," he said.

As for the wider reform of the Roman Curia, Pope Francis said everything he has done so far flows from the concerns and suggestions raised by the College of Cardinals during the meetings they held before the conclave that elected Pope Francis in March.

The cardinals, he said, expressed "what they wanted of the new pope -- they wanted a lot of things" -- but a key part of it was that the Vatican central offices be more efficient and more clearly at the service of the universal church.

"There are saints who work in the Curia -- cardinals, bishops, priests, sisters, laity; I've met them," he said, they include those who work full time, then do volunteer work, feed the poor, help out in parishes on weekends.

The media only writes about the sinners and the scandals, he said, but that's normal, because "a tree that falls makes more noise than a forest that grows."

Pope Francis himself described as "a scandal" the case of Msgr. Nunzio Scarano, a now-suspended official from the Vatican investment office, who was arrested in Italy June 28 on charges that he allegedly tried to help smuggle millions of euros into Italy from Switzerland.

"He didn't go to jail because he's a saint," the pope said.

Pope Francis was asked about Msgr. Battista Ricca, whom he named interim prelate of the Vatican bank. The monsignor, who had served in the Vatican diplomatic corps, was director of the Domus Sanctae Marthae, the Vatican residence where the pope lives.

Soon after his nomination was announced, an Italian magazine published a story claiming Msgr. Ricca had been sent away from a nunciature in Latin American when it was learned that he had a male lover.

Pope Francis told reporters, "I did what canon law said must be done, I ordered an 'investigation brevia,' and this investigation found nothing."

The pope continued by talking about how "many times in the church, outside this case, but also in this one, we go searching for the sins -- of one's youth, for example -- for publicity. I'm not talking about crimes here -- the abuse of a minor is a crime -- but of sins."

"But if a person, whether a layperson, priest or sister, goes to confession and converts, the Lord forgives. And when the Lord forgives, he forgets. This is important," he said, because those who want the Lord to forget their sins should forget those of others.

"St. Peter committed one of the biggest sins ever -- he denied Christ -- and he made him pope," Pope Francis said.

Addressing the issue of the gay lobby, Pope Francis said it was important to "distinguish between a person who is gay and someone who makes a gay lobby," he said. "A gay lobby isn't good."

"A gay person who is seeking God, who is of good will -- well, who am I to judge him?" the pope said. "The Catechism of the Catholic Church explains this very well. It says one must not marginalize these persons, they must be integrated into society. The problem isn't this (homosexual) orientation -- we must be like brothers and sisters. The problem is something else, the problem is lobbying either for this orientation or a political lobby or a Masonic lobby."

The so-called "VatiLeaks" scandal, which disrupted the end of Pope Benedict XVI's pontificate, was another issue reporters brought up. The scandal involved the leaking of private correspondence -- including to and from the pope. Pope Benedict's butler was tried, convicted and jailed for giving papers to a journalist, but a commission of three cardinals also conducted a wider investigation into how information is used and shared at the Vatican.

All the information collected by the cardinals was given to Pope Francis when he met Pope Benedict at Castel Gandolfo shortly after being elected.

Pope Francis told reporters the large box shown on a table in photos of his meeting with the retired pope contained transcripts of all the interviews conducted during the investigation. The envelope on top of the box contained the summary, a summary Pope Benedict knew almost by heart and explained to Pope Francis, he said.

"It didn't frighten me, but it's a big problem," Pope Francis said.

Kevin Clarke
@ClarkeAtAmericaclarke@americamedia.org
Show Comments (
2
)
Comments are automatically closed two weeks after an article's initial publication. See our comments policy for more.
Tom Wilson
9 years 4 months ago
This Pope is a political mastermind. He carefully proclaims the Church's position on homosexuals and conveniently avoids the Church's position on homosexual acts. He tells the good and avoids the bad, and in doing so he has won over millions who hear what they've been longing to hear even though it wasn't said. That should stem much of the attacks that have been made on the Church by homosexual advocates (He likes us, he really likes us!), including the priest abuse scandal on which homosexual advocates have led the charge. And he has now added "lobbying" to the list of bad acts of homosexuals, thus paving the way for priests who are gay but who are unable to act on it (celibacy and sinfulness of homosexual acts) and who are unable to lobby for changes within the Church, such as gay marriage. Ta-da! Keep all the gay priests, affirm their welcome in the Church, and shut down the "gay lobby." (Of course that still leaves the problem of the dwindling percentage of heterosexual men who do not consider the priesthood because it is perceived as a gay profession.) Francis' words are an affirmation of the Church's traditional teaching but sounds like progressive thinking and a shifting of the Church's position. Really brilliant.
john andrechak
9 years 4 months ago
Mr. Wilson, Good post here. I respect and appreciate your point. But I did find Francis's words hopeful. And perhaps they should be judged not only in the context you describe, but in those reacting against them. Be certain the level of frothing at the mouth, certain to be posted on this page, will be impressive!