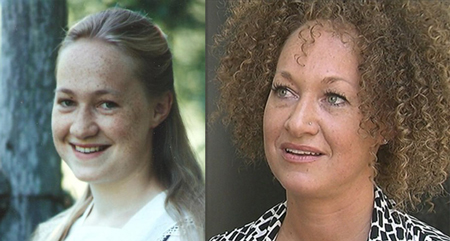 Yesterday, I would have said that Rachel Dolezal and the NAACP both hope that her resignation from the presidency of their Spokane chapter would mark the end of this bizarre story. Twenty four hours later, I get the feeling that Dolezal would like nothing more than to be the poster child for a conversation on race, in fact, I get the feeling that she's been aching for it.

But after her appearances on the Today show with Matt Lauer this morning and Melissa Harris-Perry on MSNBC it's unclear just what she wants that conversation to be.

Beyond telling Matt Lauer "I identify as black." Here's what she's said:

What about the countless parents out there who have adopted children from Korea, Vietnam, Latin America or Russia? Do they need to alter their appearance too to be considered legitimate parents?

Why is this such a hard question? What's so complex about it? Why do I feel like the ghost of Bill Clinton Past is about to jump in to parse the definition of the word "is?"

The notion of identity has been at the center of much of the cultural conversation for decades, but it's been thrown into a particular relief in the past month as Bruce Jenner has unveiled his transgender self known as Caitlyn and now Rachel Dolezal's racial masquerade.

While Jenner's story certainly has shock value, after watching the extensive interview Diane Sawyer did with him there was a sense of earnest sincerity that convinced me that the former decathlete truly struggled with his identity for most of his life and that this was an agonizingly difficult decision. (The fact that the rest of the "rollout" of Caitlyn Jenner has been stage managed to within an inch of its life for maximum media impact--Vanity Fair cover, reality tv series etc--adds a sad, cynical twist to what otherwise seemed authentic.)

"Authentic" is actually the pivotal word for me here. I have no reason to doubt that Rachel Dolezal believes she is who she says she is but there's something enormously synthetic about her. Something that rings out of tune. Like a digital sample of a self, but not the actual self.

There's also something oddly offputting about her on-air demeanor. It's as if she's the damaged 21st century hybrid fruit of an overheated multiculti academic discourse from the 1980s and our media-saturated age where everyone has a public self/brand that needs to be accepted at face value. Even her explanation of the discovery of her black identity sounds like a co-opted narrative often heard from gay men regarding the discovery of their homosexuality "at age five I was drawing self portraits with the brown crayon instead of the peach crayon and the black curly hair."

In the broad sense I imagine there is always a certain amount of fluidity to our notions of personal identity but there's something oddly fetishistic about Dolezal's identification as black. Is this an authentic self she's coming to grips with or the extreme manifestation of a projected desire to be someone else or, more precisely, some "other" self?

My biggest fear is that Dolezal has a Rupert Pupkin moment (book deals, reality shows etc) that transforms her from being a sad/strange figure into a celebrity "expert" on culture and race. There is absolutely an urgent need to have a continuing conversation about race and identity in the United States but Rachel Dolezal is the last person who should be leading it.

Show Comments (
5
)
Comments are automatically closed two weeks after an article's initial publication. See our comments policy for more.
Michael Ward
5 years 5 months ago
In the end I have a hard time distinguishing between Dolezal and Jenner. It seems to me like the basis that folks are pointing to distinguish the cases is "authenticity". How is that different from merely "sincerity"? Is that really the basis upon which a man and a woman are who they are? Or African Americans, African Americans? That seems pretty thin.
Bill McGarvey
5 years 5 months ago

Thanks for the comment, Michael. I agree that it is a very complicated issue and that many people will have trouble with both cases of altered identity. My notion of authenticity is rooted more in my faith perspective. "Who am I, authentically, before the God of love?"

It is impossible for any of us to see into another's soul, that said, I felt like there was for Jenner a sense that his desire to identify as a woman was rooted in some sort of soul searching over decades. Dolezal's actions feel like an appropriation of another identity that has deep historical and political implications.

Let me put it this way. If Caitlyn Jenner decides to go women's protests to protect her rights as a woman I think that would be more problematc than if she protested on behalf of trangender people. Dolezal has absolutely been deceptive in what she's done.

Bruce Snowden
5 years 5 months ago
Sadly we live in a time of shattered truth, where truth "becomes" whatever you want it to be. I suspect Rachael Dolezal is benignly delusional, somehow finding untruth a comfortable pillow on which to rest her head, hopefully nothing more conniving that that. Bruce Jenner in his feminine form is, I think the unfortunate product of a tangled identity, a "fulfilled" fantasy to be what he is not. Rather than trying to unkink the kink, he decided to kink it tighter. I hope that both Jenner and Dolezal will somehow find a degree of peace. In the meantime it might be good for all to remember what St. Pope John Paul II once said, "Truth is not truth because we believe it. Truth is truth whether we believe it or not!"
Bill McGarvey
5 years 5 months ago

Thanks for your comment, Bruce. That's a lot of truth you're stacking up there. I don't know the context of that JPII quote but I'm not sure if it's directly applicable to the situation you're using it for here. Clearly the Church is not supportive of transgenderism but I was trying to think in terms of a pastoral response to people. Jenner's situation should be met with compassion and a desire to understand; I think we'd like to understand Dolezal as well but there's a level of deception here that is troubling.

Bruce Snowden
5 years 5 months ago
Bill, I don't remember exactly, but think the JPII quote I used was made in conversation with George V. Coyne, S.J. director of the Vatican Observatory, discussing evolution. Thanks for commenting on my post, in which I tried to address the two issues simply, plainly and without gloss. Of course pastoral outreach is for everyone at all times and places, but objective truth cannot be compromised in the different shades of light, dark, dim. bright and everything in-between. One of our grandkids, an eight year old playfully asked, "Grandpa, how much is 10 + 8? I said, "18" She said, "No, 21." I guess its humor is in its fallacy - if something is truly true, how can it not be true? Maybe I'm just too simple to see beyond that.